Chemtrail tanks photographed inside an airplane 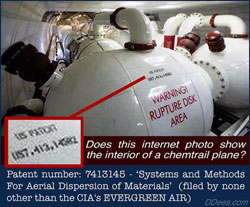 The shattering truth about death streaks (chemtrails) has lately started to come out to the surface increasingly more. The picture to the right unveils for the first time the special tanks inside an aircraft that are used to spread chemtrails. Along with the testimony of employees of the commercial airlines that spread death trails, this photo is irrefutable evidence that the satanic world elite that leads this planet from the shadow planned a planetary genocide to reduce the number of people on this planet.
Besides the testimonies of the employees of the airline companies which discovered and then revealed that commercial aircrafts were equipped with special systems meant to disperse into the air chemicals that are extremely harmful to humans, there are also some politicians who publicly admitted that chemtrails are highly toxic substances that endanger human health. Although this worrying phenomenon is known by most governments, politicians are afraid to speak publicly about it and thus led by the U.S., many governments of the world unabatedly continue this criminal action against their own citizens.

Following laboratory tests on substances that come from chemtrails, highly toxic pathogens were found, including mycroplasma fermentans (incognitus). It is very significant that these pathogens were found in approximately 45% of former soldiers suffering from the mysterious and exhausting disease called Gulf War syndrome. In addition, it was found that in areas where chemtrails have been spread for some time the people suffer from respiratory deficiencies and present strange symptoms like those of a cold, sometimes feeling brain scattered and a state of mental confusion.
Chemtrails also contain barium and aluminum. Sprayed as fine particles, barium is highly toxic to humans, weakening their immune systems and causing disastrous effects, which in addition are recurrent; introduced into the body in this form, barium T deactivates the receptors of lymphocyte T, reducing the body resistance to agents that cause various diseases. 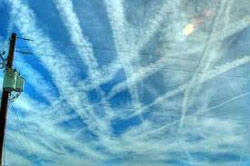 This secret biological warfare is an effective way of the criminal satanic elite of the so-called ‘enlightened’ to carry out the sinister plans to mass reduce the world population.

After the destruction of the reptilian bases on our planet due to destabilization of the highest structures of the occult powers that lead us from the shadows, in some countries it was reported that the trails of death in the sky were missing for some period of time. The new energetic frequency on our planet will not allow such criminal actions to probably take place for too long, due to the high level of vibration. Until then, it is necessary to better protect ourselves from these criminal “air attacks” that can seriously jeopardize our health.

A lucid outlook over our own life