PANCHA-KOSHA – the five enveloping layers of the human being

According to the teachings of the oriental spiritual tradition, the human being is endowed with five bodily enveloping layers called KOSHA, their entire ensemble being generically named PANCHA-KOSHA. Literally, the Sanskrit word KOSHA means “cover” or “vehicle of consciousness”. The five layers of the human being are entitled:

The Sanskrit word KOSHA designates the existence of a reality which is, analogically speaking, resembling the lamp shades covering the light of a lamp. The oriental spiritual tradition often uses this analogy in order to better depict the reality of the existence of the five layers (KOSHA) of the human being. Each human being is described as a lamp, endowed with a light bulb on top of which we can find the five superposed lamp shades. Each lamp shade has its own color and density. When light goes through each of the five lamp shades, it gradually changes its initial color and intensity, so that the light of the lamp is being modulated by each lamp shade. On the other hand, all five lamp shades of give the lamp its specific beauty.

Therefore, respecting this analogy, we can say that all the human beings are in fact hiding the pure spiritual light which is mysteriously modulated by the five layers (KOSHA), but in eternity, it is none other than the divine mysterious spiritual light of the Supreme Immortal Self (ATMAN). The way of revealing the Supreme Immortal Self (ATMAN) is a way of the progressive movement of the individual consciousness inwards, just as we would unveil every lamp shade, analogically speaking, so that we will eventually be able to experience the divine purity which resides in the light that dwells eternally in the everlasting core of our being, the Supreme Self (ATMAN).  At the same time, the process of Self realization allows the harmonious awakening and activation of the five layers (KOSHA), thus making it possible for the state of spiritual purity to gradually animate our individuality, on all the levels of our being. 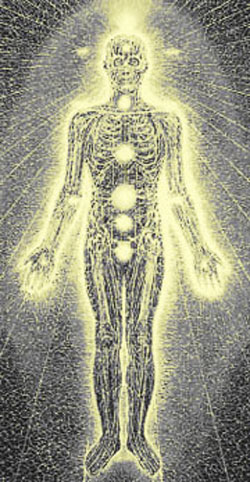 The illusion (MAYA) is permanently generating the feeling of affiliation. In reality, all the levels, all the depths or all the layers (KOSHA) of the essential spiritual reality are but mere appearances, manifestations of the cosmic illusion (MAYA), although they are perceived as being very real when we are interacting with the outside world. With all these appearances, we are essentially pure, divine and eternal consciousness.

This is one of the fundamental principles of spiritual teaching. Some people are erroneously thinking of the illusion (MAYA) as being something unreal and thus they will get to sterile intellectual practice. In reality, the illusion (MAYA) is the expression of the universal creative force (SHAKTI). Hence, we can experience the existence of the five layers of the human being (KOSHA) both from the perspective of transcending the limitations they generate on the individual consciousness, and from the perspective of the beautiful and harmonious manifestation of the unique essential world of God, through each and every one of them.

Our soul (JIVATMA) is permanently interacting with these five layers (KOSHA) in order to manifest in different plans of existence. According to the KARMA we’ve accumulated, it “ties” itself to them and thus it gets caught in the endless cycle of birth, death and rebirth (SAMSARA). As the human beings are evolving, gradually progressing towards the state of spiritual liberation (MOKSHA), they become more and more aware of the existence of subtle worlds, by awakening some special spiritual abilities called the SIDDHI-s, such as clairvoyance, the paranormal sentience of energetic states, clear-hearing, etc.

By going through the successive incarnations, the being is reborn, again and again, both in the physical universe, and in diverse subtle worlds. These subtle astral realms are consisting of different frequency levels which are correspondent to the different levels of consciousness that human beings can reach throughout their spiritual evolution. In some of these worlds, there are beings which are predominantly interested in satisfying their own pleasures and desires, while in other subtle dimensions there are beings that have awakened an intense spiritual aspiration, they are constantly seeking to further themselves spiritually, and thus contributing to the spiritual well-being of all the beings in Manifestation.

The Angels of Faith

WHO IS SO AFRAID OF MISA AND GREGORIAN BIVOLARU?