“Although good and evil are both conditioned manifestations of the spirit, yet evil is its outermost layer, while good is much closer to the real man, to the Self. Man cannot reach the Self until he first sheds the layer of his evil deeds, and only then the layer of his good deeds. So, in the end, the karma that still remains attached to his physical body and consciousness will always be a good karma, for until all its impurities have been burned away, it is impossible for man to reach the Supreme Truth. 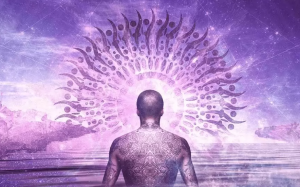 We can recognize the one who is liberated in life by his good deeds; his lips can only utter blessings, his hands can only perform good deeds, he can only think sublime thoughts, his presence is a blessing wherever he is. Such a man has the gift of changing even sinners into saints by his mere presence. This is the immense difference between the two poles, between true spiritual realization and the mere claim to have attained it…

From a misunderstanding, people are afraid that if they reach the ultimate realization, the wells of love will dry up in their hearts, that everything they love in this life will disappear. They never think that the great prophets of this world were only those who gave up all trace of individuality, that you do not really love when you attach yourself to a petty object or a mortal being. The true object of love cannot be a handful of dust, but only the Living God. Through spiritual realization, the wife will love her husband all the more, the more she will recognize God in him. The husband will love his wife all the more as he recognizes God in her. And the mother will love her children all the more, as she recognizes God in them. Even the most terrible enemy can be loved when you recognize God in him….

Only such a man has the right to claim that everything is perfect in this universe. This is the great good that spiritual perfection can bring to this world: if all mankind were to realise even one small aspect of the truth, then the earth itself would become a heaven, and its inhabitants would no longer be men but gods.” – Swami Vivekananda

There are beings who came to earth for us. Their mere presence awakens in the soul the deepest feelings of happiness, peace and love. They bring to light all that is most beautiful in everyone. They show us how to fulfil our heart’s greatest desire. They open the door to spiritual fulfilment and guide us in every moment.

They are permanently in communion with God.

“The state of enlightenment is described as follows: there is a continuous awareness of oneness between the Supreme Self Atman of the being and God. There is no longer any trace of the identification of the Atman with its layers. Any sense of duality is utterly obliterated. There is a pure, unified consciousness. The man who is firmly established on this level of consciousness is said to be enlightened.

For him, the sufferings of this world are over. Though he possesses a finite physical body, he remains united with the Infinite. His heart knows no anxiety. Such a man is said to be liberated in this very life. 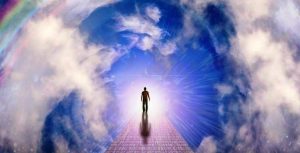 Although he lives in the physical body, it is more like a shadow that follows him. He is no longer troubled by the thought of ‘I’ and ‘Mine’. These are the characteristics of a man who is liberated in this very life.

He is no longer tied to the past. He is no longer chained to the future. He is detached from the present. This is how you can recognize the man who is liberated in this very life.

Good and evil seem to exist everywhere in the world. People and objects seem to be distinct. Yet he looks at everything from the point of view of equality and unity, because he sees the Supreme God in everything. This is how you can recognize the liberated man even in this life.

The good or bad destiny can come upon him. He regards both with detachment and inner calm, remaining untouched by either. This is how you can recognize the liberated man even in this life.

Because his consciousness is continually melted in the bliss of God, he looks equally at the inner world and the outer world. This is how you can recognize the liberated man even in this life.

Life is passing by: he watches it as a detached witness. He does not identify with the physical body, the sense organs, etc. He has gone beyond the idea of duty and obligation. This is how you can recognize the liberated man in this life.

With the help of the living words of the scriptures, he achieved union with God. He is no longer compelled to be reborn. This is how you can recognize the liberated man even in this life.

He never identifies himself with the physical body or the sense organs. This is how you can recognize the liberated man even in this life.

Through his transcendental lucidity he realized that God is everything. This is how you can recognize the liberated man even in this life.

Holy men may glorify him, wicked men may insult him – his feelings towards them are the same. This is how you can recognize the liberated man even in this life.

The rivers flow into the ocean, but the ocean doesn’t flood because of this. The objects of the senses flow into his consciousness, but he feels no reaction, because he is aware of the Unique Reality. He is truly liberated even in this life.” – From Viveka Chudamani, by Shankaracharya

The importance of Master-Disciple Relationship

The Ideal Pattern of a Spiritual Master

Dependence and Independence within the Master-Disciple Relationship