Endgame: Disclosure and the Final Defeat of the Cabal (1)

The Cabal is closer to exposure and defeat than ever before. The truth is blasting through the internet as a civilian-led investigation takes hold.
Does the Cabal have a final “Hail Mary Pass” to create a mass distraction and take the heat off? Could their final move actually be Disclosure? What if this pre-planned Disclosure turns out to be far more epic and surprising than anyone could have possibly imagined?

In order to set up this story, we first have to expose exactly how rapidly the Cabal is plummeting to the Earth at this time.
Then we will see they have no choice but to make their final Endgame moves.

Part one: by David Wilcock

Disclosure is upon us. Never before have we seen so many tangible signs of progress towards an imminent breakthrough. The latest intel from the deepest levels of the UFO cover-up is some of the most fascinating data we have ever received.

If it proves to be true, we are right on the brink of experiencing the most significant events in all of our recorded history on Earth. Some very cosmic, world-changing information could soon be dropped upon us from an official level in a “Partial Disclosure” scenario.

This could potentially include the revelation of astonishingly high-tech buildings and cities discovered under the ice in Antarctica.

Imagine if you woke up one day to see hyper-futuristic ruins being revealed in Antarctica. You’re not seeing this on Ancient Aliens or on alternative news sites, but everywhere… on every major media platform there is. Imagine journalists and military officials revealing these incredible findings – in videos shot on location. An event of this magnitude could be far more distracting than any 9/11-style catastrophe.

The power elite may well be hoping that such a civilization-defining “game changer” could make any and all preceding news stories irrelevant and forgotten.

Only now can it be discussed

Corey Goode was made aware of the discovery of epic new Antarctic ruins and wasn’t even authorized to tell David what was going on.

We have only just now been cleared to release this critical, time-sensitive data to the public. Since there is a large amount of information to share, this update is definitely a long read – but well worth it.

In order to set up this incredible new disclosure information in Part Two, it is first important to establish the “backstory” of current events through which such a disclosure event would be seen to occur. The full, grotesque nature of the hidden group that has been concealing the truth from us for so long is finally being exposed. 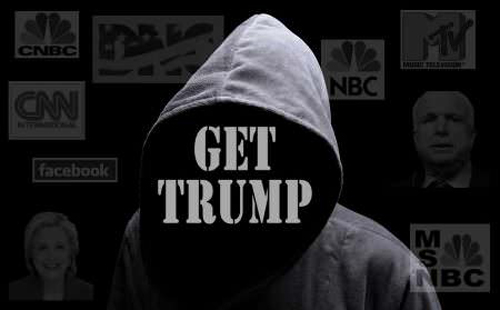 The 2016 presidential election was arguably the most contentious, nasty political battle in American history. This has been well-covered by almost everyone on either side of the political spectrum, so we will not go through all the fine details again here. In the final moments, a mysterious group called “Prop or Not” appeared out of nowhere, and issued a McCarthy-esque list of “fake” news sites, allegedly under “Russian” control.

The mainstream media acted as if this “hit list” was as significant as the invention of the wheel. They immediately adopted the fascist, Orwellian term “Fake News” into their faltering Real News products.

Each link within the complete collection of blacklisted sites – currently 200 in total – is already being blocked or de-monetized by Facebook, Google, Apple, Snapchat and others.

According to Glenn Greenwald at The Intercept, “[Prop or Not’s] list of Russian disinformation outlets includes WikiLeaks and the Drudge Report, as well as Clinton-critical left-wing websites such as Truthout, Black Agenda Report, Truthdig, and Naked Capitalism, as well as libertarian venues such as Antiwar.com and the Ron Paul Institute.”

A journalist writing for New Yorker blasted “Prop or not”, saying their definition of Fake News “includes criticism of the United States, Barack Obama, Clinton, the European Union, Angela Merkel, NATO, Ukraine, ‘Jewish people’, U.S. allies, the mainstream media, Democrats, and ‘the center-right or center-left, and moderates of all stripes’.”
“These criteria, of course, could include not only Russian state-controlled media organizations, such as Russia Today, but nearly every news outlet in the world, including the Post itself.”

Activist Post, one of many so-called “Fake News” sites, said: “However, it is also an exhilarating time to be a part of such mammoth upheaval, where – the entrenched apparatus of the State itself has declared information to be its enemy – and acknowledged that it must do everything in its power to maintain its tenuous monopoly on the truth.”

You get to decide what is truth

We are only now witnessing a more visible form of the same cover-up that has hidden UFO reality from us for over 80 years – consistently deeming all UFO sightings “Fake News”.

State-sponsored media has engaged in psychological operations or “psyops” to discredit witnesses and insiders from the very beginning.

The Internet has opened up an era in which we, the people, now get to decide what media we want to consume, and what we choose to believe on a day-by-day basis.

If entities like Facebook are going to suppress any links that divert from dying “Real News” government propaganda, then we must now work harder to avoid being dependent upon them.

What exactly do you mean by “fake?”

By definition, the Snowden documents would be “fake” as well – yet the operations they exposed are as serious as a heart attack.

As Global Research so brilliantly stated on December 1st, 2016: “The [mainstream media] editors and writers who produce these articles seem not even to notice that their publications have been caught in one colossal lie after another, from the claims of Iraqi ‘weapons of mass destruction’ used to justify the illegal invasion and occupation of Iraq in 2003, to the more recent flood of government propaganda in support of neo-colonial wars in Libya and Syria, and drone killings in a growing number of countries – all justified in the name of ‘human rights’ and the ‘war on terror’. There are no institutions anywhere in the world more adept at producing ‘fake news’ than the American corporate-controlled media.” 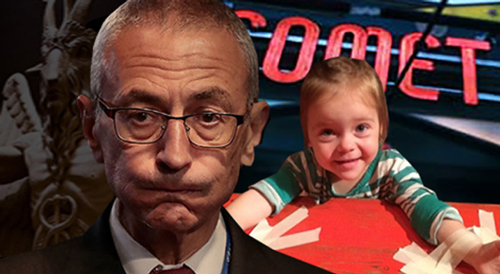 “Real News” is nothing but a last-ditch effort to sway the 15 percent or so of people who still even listen to state-run corporate media.

Perhaps the single most vigorous “Real News” target is something called Pizzagate, which has taken the internet by storm, particularly in the YouTube-watching millennial generation.

Full disclosure… this is about as far as you can go in this article without encountering some upsetting information that may be new to you.

If you get triggered by anything you read here, (which is still very mild in comparison to many of the videos) please skip ahead to lying through their teeth and come back to it later.

If there is any chance that these allegations are real, we owe it to the victims to be strong enough to look at the truth.

The unclassified logos discovered by the FBI

The discovery of these peculiarly-used food terms combined nicely with an earlier WikiLeaks release of an FBI document from 2007, Symbols and Logos Used by Paedophiles to Identify Sexual Preferences.

This was also made into a slideshow shortly after its initial FBI release in 2008. We found the slideshow by inputting the code number Q-FBI-2200-005-06. It appeared in SlideShare, a division of LinkedIn.

Here we will use some of the slides and some images from the original legal document. 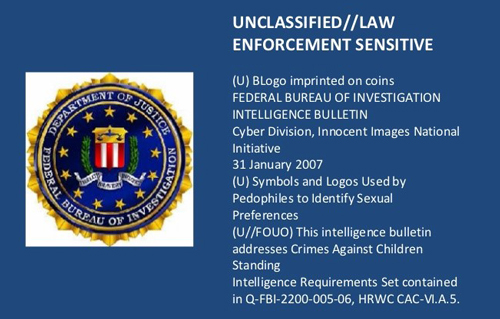 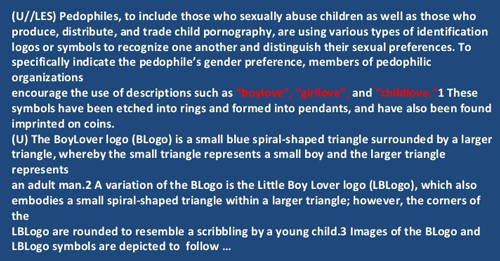 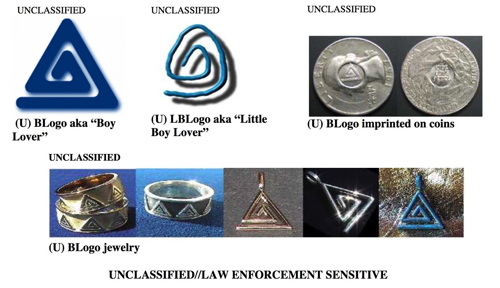 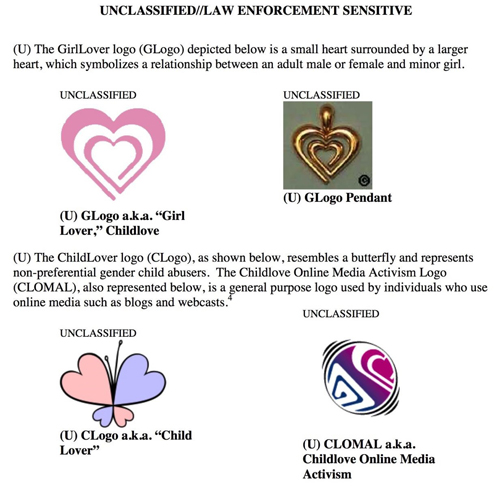 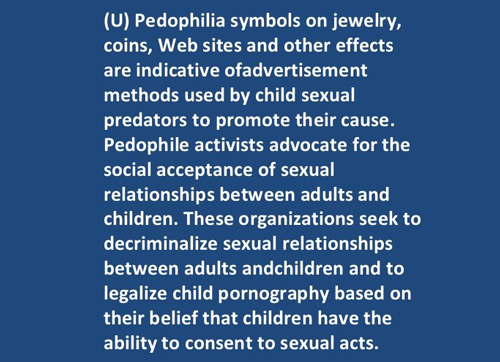 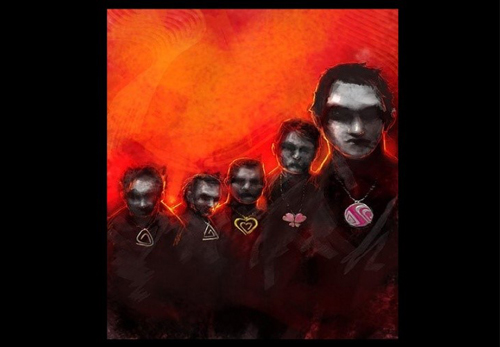 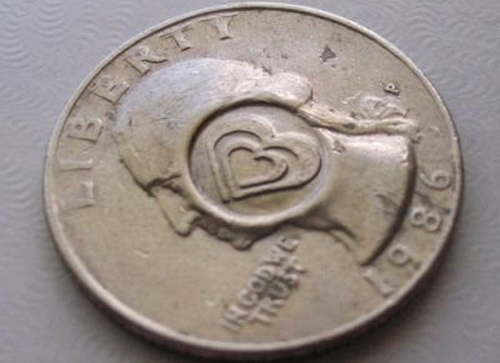 The Podesta emails went public as of October 7, 2016, and were devastating to the Clinton campaign for other reasons, at least initially.

As the Millennium Report pointed out, “John Podesta is not only the ultimate Democratic powerbroker, Beltway insider and powerful political fixer, his professional resume is both long and deep in the U.S. Federal Government.

[Podesta] was Bill Clinton’s White House Chief of Staff back in the 1990s, Barack Obama’s Counsellor to the President, and Chairman of Hillary Clinton’s 2016 presidential campaign.”