Go for a brisk walk every day to protect your brain 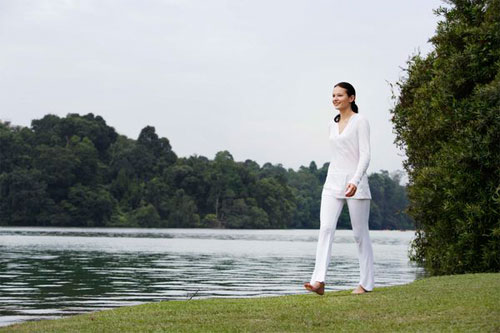 Aerobic exercise, such as taking a brisk walk, each day, can help protect the brain from cognitive decline, according to a recent study. In the U.S., approximately 50 million people are suffering from Alzheimer’s disease, the sixth leading cause of death in the country, or other forms of dementia.

A team of researchers from the University of Connecticut, University of Alabama, and Hartford Hospital conducted a study on whether exercise could slow down mental decline or improve the thinking ability and decision making of older adults. For the study, the research team reviewed 19 past studies that looked at the effect of exercise on cognitive function in older adults who are at risk of developing Alzheimer’s disease.

A total of 1,145 older adults, most of whom were in their mid- to late 70s, took part in the studies. Of the participants, 65 percent of them were at risk for Alzheimer’s disease and 35 percent had been diagnosed with the condition.

The findings of the study, which were published in the Journal of the American Geriatrics Society, revealed that older adults who did aerobic exercise alone showed the most significant improvement in brain function in comparison to those who participated in both aerobic training and strength training exercises. In addition, those who did not exercise at all experienced declines in cognitive function. Furthermore, older adults who exercised exhibited small improvements in cognitive function, regardless of the type of exercise they performed.

“Our findings suggest exercise training may delay the decline in cognitive function that occurs in individuals who are at risk of or have Alzheimer’s disease – with aerobic exercise possibly having the most favorable effect,” said one of the researchers of the study, Gregory Panza, of the University of Connecticut.
Thus, the research team suggests that aerobic exercise may be more effective than other types of exercise in maintaining the ability to think and make decisions.

Another study, published in the journal NeuroImage, found that aerobic exercise slows down decreasing brain size in older adults, which helps maintain cognitive function. The study authors looked at how aerobic exercise might affect the brain.
In conducting the study, they reviewed 14 various clinical trials with a total of 737 brain scans taken before and after participation in aerobic exercise programs and during a control setting. The participants were aged 24 to 76 years old, some of whom were cognitively healthy while others had mild cognitive impairment, depression, and schizophrenia. The participants joined in workout programs, which included walking, stationary cycling, and treadmill exercise. These programs went on for three to 24 months, and were composed of two to five exercise sessions every week.

The results revealed that aerobic exercise increased the size of the left part of the hippocampus, a region in the brain that is involved in the formation and consolidation of memory, even though aerobic exercise did not affect the overall volume of the brain region.

Evidence has shown that the left side of the hippocampus, in particular, is involved in memory function and verbal learning. This suggests that aerobic exercise can slow down age-related cognitive decline influenced by the decrease in size of the left hippocampus.

“Our data showed that, rather than actually increasing the size of the hippocampus per se, the main ‘brain benefits’ are due to aerobic exercise slowing down the deterioration in brain size. In other words, exercise can be seen as a maintenance program for the brain,” explained Joseph Firth, lead author of the study.

What do crowd control, burning skin, and superbugs have in common? 5G