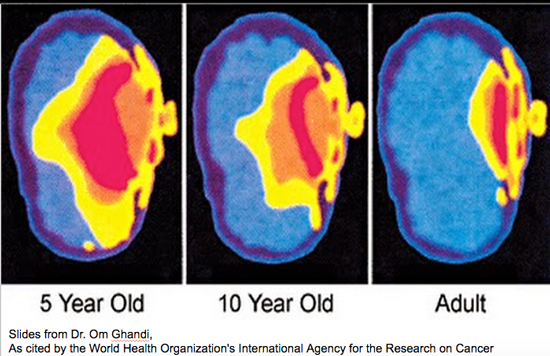 Figures indicate that you likely use a cell phone on a daily basis. In the US, 95 percent of all people do so. And statistics indicate that most of western children now have one of these devices by the age of 10. That must mean they’re safe, right?
Unfortunately not. And though it has been scientifically proven that cell phones are harmful, health departments all over the west have been loath to speak out against them, leaving an uninformed public vulnerable to serious health problems.

Back in 2011, the World Health Organization’s International Agency for Research on Cancer warned: “The WHO/International Agency for Research on Cancer (IARC) has classified radiofrequency electromagnetic fields as possibly carcinogenic to humans (Group 2B), based on an increased risk for glioma, a malignant type of brain cancer, associated with wireless phone use.”

Now, the California Department of Public Health (CDPH) has issued a very watered-down warning about the safety of cell phones, but only after being virtually forced to do so by Joel Moskowitz, director of the Center for Family and Community Health at UC Berkeley’s School of Public Health.
Dr. Moskowitz has been fighting since 2009 to get the CDPH to release information about the dangers of cell phone radiation. For years, they have been sitting on a document entitled Cell phones and health, which was commissioned seven years ago and has been revised several times, but was not released until Moskowitz forced the issue by taking the matter to the courts.

While cell phone stores in Berkeley began warning their customers about these dangers over a year ago, the CDPH is only now warning people not to sleep with their cell phones under their pillows, and to never carry them in their pockets, but to rather store their mobile devices in their purses or leave them at home.
Nonetheless, when asked whether the CDPH now views cell phones as dangerous, its representative, Dr. Karen Smith, was quick to respond: “Not at all. Our position is that the science is evolving”. Whatever that means…

Dr. Moskowitz is singularly unimpressed with the CDPH’s attempts at protecting the public. “Currently we’re not doing a good job in regulating the radiation from these devices”, he said. “In fact, we’re doing an abysmal job. People are being injured and harmed by the delay in having this information accessible to them.”

The CDPH’s own investigation found that people diagnosed with certain forms of brain cancer are more likely to have used cell phones in the preceding decade, and that the cancers usually occurred on the side of the head that their cellphones were most often used on.
Nonetheless, as a society we have become incredibly dependent on our mobile phones, and it is unlikely that people will suddenly stop using them, so what are some safety tips to keep in mind when using these devices?

1. Spend as little time on any given conversation as possible; even a two-minute conversation disrupts brain activity for an hour;
2. Text rather than phoning;
3. Get a newer cell phone that emits less radiation;
4. Use a headset whenever possible;
5. Avoid using your mobile phone in an elevator or any other metal enclosure, including your car;
6. More radiation is emitted when your cell phone battery is low, so keep it charged;
7. Wait until the phone is answered before physically putting your cell phone to your ear.

Hope you enjoy the chemicals you eat