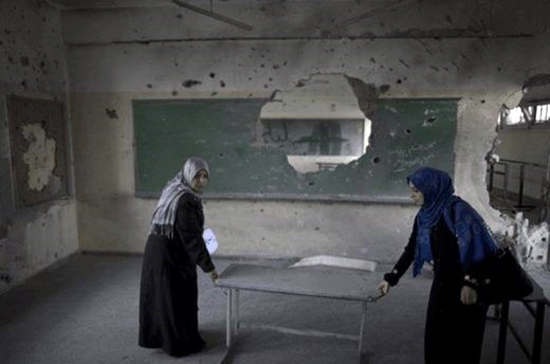 A Gaza school in shambles after Operation Protective Edge in 2014

“The wrongs which we seek to condemn and punish have been so calculated, so malignant, and so devastating, that civilization cannot tolerate their being ignored, because it cannot survive their being repeated.”
With these commanding words, Robert H. Jackson, Chief Counsel for the United States, opened the War Crimes Tribunals at Nuremberg, Germany not long after the conclusion of World War II.
Empanelled to hold accountable military, political and judicial leaders for violations of international law, including war crimes, crimes against humanity and the law of war, the tribunals imposed personal accountability for genocide directed at Jews and others marked by the German state as a challenge to its declared racial, religious and political supremacy.

Although these offenses took many forms, at their core, each derived their evil from a common intersect that those targeted by the state for eradication were not just inferior, but unworthy of life itself… men, women and children, young and old, reduced to little more than objects of surreal derision whose mere existence contaminated the state’s supremacist lens.

There is no secret about the campaign of terror unleashed by the Third Reich as it swallowed states and triggered international violence unseen before or since. Nor are its tools of open warfare against military and civilians, alike, subject to any serious debate. While some choose to contest the number of victims or recast the precise instruments of persecution, no serious observer of history doubts the role that box cars, ghettos, siege, and ovens played in a conscious effort to silence the diversity of life while much of the world looked away. 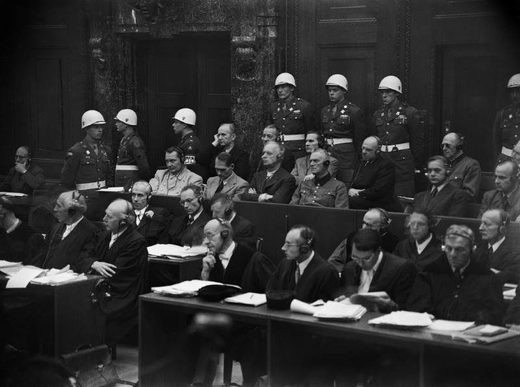 View of some of the Nazi leaders accused of war crimes during World War II during the war crimes trial at Nuremberg International Military Tribunal court, held between Nov. 20, 1945 and Oct. 1, 1946.

The assault on humanity did not unfold overnight, or in a vacuum, with a sudden roundup. It followed a well calculated and implemented historical rewrite, a slow, but steady, recast of entire peoples stripping them of their history, culture and collective purpose and decency.
What began with the burn of books and silence of press soon moved on to a successful reach of propaganda that cast a dark pall across millions whose wrong was to speak a different language, embrace another faith or to demand justice. Once there, it was a short walk to assault and worse.

The Repeat of History

With conscience, and vision as an outsider looking in, today, it is simply impossible not to feel an overwhelming sense of sheer revulsion when, if one is a caring being, an honest scan comes across Israel.
Forget about humanity and compassion or any broad notion of beneficial collective purpose. By now, Israel has reduced these cornerstones of fundamental decency to fabled fiction… a successful narrative of perverse existence that crushes truth and justice as little more than tedious impediments to its own, now decade’s old, ethnic and racial pogrom against others.

Israel is good at what it does. Very good. No, not its slaughter, torture and endless detention and land theft; these are givens. A dark, very public, almost proud record of “achievement” that stands essentially unparalleled when it comes to recent contempt for international norm and law.
Like those before, what it really excels at is the grand lie, the convenient historical rewrite; the excuse; the ability to recast yesterday, today and surely tomorrow as so much a duty-bound journey in which no outrage is beyond the pale, no crime too extreme, no offense too offensive. Always, of course, cast in the “talisman” of survival. It’s a skill… a dodgy political art-form that converts inconvenient truth into self-serving dogma with all too predictable deadly consequence.

Unlike that rare explosive autocrat or passing despotic regime, Israel has perfected its crafted control of selective reality in time-tested ways nothing short of masterful. Long before U.N. anthropologists discovered a European state in the midst of an Arab history, Zionists mastered the skill of expedient deception.
Thus, almost a hundred years ago, European terrorists became celebrated freedom fighters as they slaughtered Palestinians asleep in their beds and cribs. The Nakba, a forced stampede of almost a million Palestinians sparked by mass rape and murder, recast with historical ease to become a voluntary transition, a move by restive villagers to find a better time in a better place. 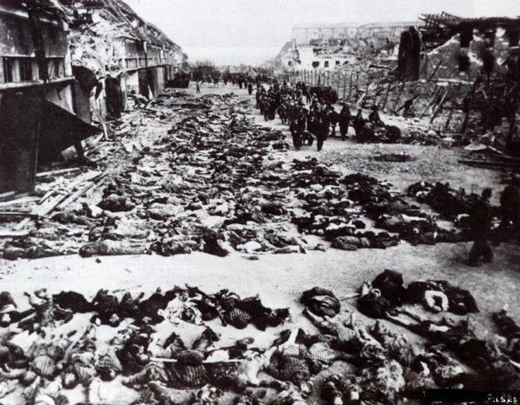 Kibbutzim, those socialist communes that, with magic-like remake, blossomed from long barren deserts… Could that be the rubble of age-old villages and decomposed remains just below the veneer of the sand?
Settlements, an employment opportunity for a troubled work force in need of purpose and discipline. The siege of Gaza… not at all a premeditated embargo of food, medicine, water, electricity and movement to break the will of its two million people, but rather a generous helping hand to liberate them from the limitations of their primitive vision and Hamas terror.

Advancing itself as a democracy under siege, Israel has long since abandoned any pretense of equality and justice in its limitless thirst to seize what little remains of Palestine as it exalts a racist de jure Jewish state in its quest.
This supremacist drive has been occasioned not merely with the passage of time or through a loss of interest by the world community alone. Along the way, to be sure, by design, Israel has successfully exploited the ignorance and fear of Arab and Muslim communities by the West. Of late, it has found willing companion among some Arab states anxious to move on from proxy to full on partner as they’ve tired of the “dilemma” that is Palestine.

In Israel and the occupied territories, the catalog of “ersatz” narrative is endless. With a slap… a stab, a book… a bomb; a prayer… a provocation, the Zionist tale has long since swallowed any semblance of relevance, let alone reality. Yet, from time immemorial, much of the world has blinked, frozen in place, fixated by a steady broadcast of propaganda, both home spun in Israel and in echo abroad.
Yet, in April (2018), that faux moral perch has begun to collapse as the winds of truth have blown away the mask of hate that is very much Israel. During this time, tens of thousands of peaceful unarmed demonstrators marched on the barricades of their Gaza prison only to be met by carnage.

It is unnecessary to repeat, in full, the tales of slaughter that ensued as hundreds of snipers, drones and tanks announced with deadly precision that all were fair game for nothing more than voice. When the tear gas cleared, young men, women and children, elderly and journalists alike, lay paralyzed by a strain of chemical assault, similar to sporadic reported uses since 2001, which soon gave way to uncontrolled vomiting and trembles.
For others, less fortunate, thousands lay bloodied by explosive high velocity munitions designed to rip apart flesh and destroy organs. Some thirty-one Palestinians were murdered. Almost all casualties shot in the back of their head or torso.
What is there about a peaceful march, the national flag, and a Dakbe song and dance that so enrages an occupation force as to drive its snipers to unleash deadly targeted fire as if surrounded by well-armed enemy combatants? 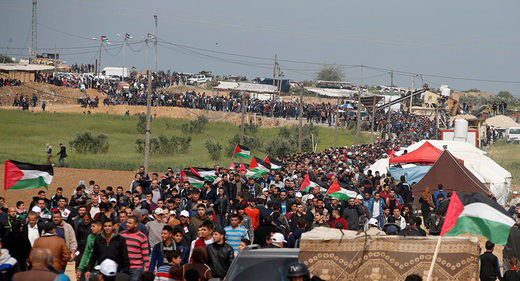 Palestinians at the April protests along the Israel border with Gaza, demanding the right to return to their homeland, east of Gaza City

Under international law, crimes against humanity include “murder and other inhumane acts carried out against any civilian population, when such acts are done or such persecutions carried on in execution of or in connection with any crime against peace or any war crime.”
A war crime is an act that constitutes a “serious violation of the laws of war that gives rise to individual criminal responsibility and include intentionally killing civilians, destroying civilian property and serious violations of the principles of distinction and proportionality, such as strategic bombing of civilian populations.”

Finally, “the fact that a person acted pursuant to order of his Government or of a superior does not relieve him from responsibility under international law provided a moral choice was in fact possible to him”.
That is to say it is not an acceptable defense to simply say “I was just following my superior’s orders”.

For years, as some have debated the reach of international law, much of the world has stood in silence and, accordingly, very much complicit as Israel has carried out unspeakable offenses against a largely civilian population in Palestine.
Although often nuanced, if not complex, the application of law to facts is not magic. At times a plain read of well settled legal covenants in the light of events at hand can lead even an unpracticed but principled eye to conclude that violations of law have in fact occurred. 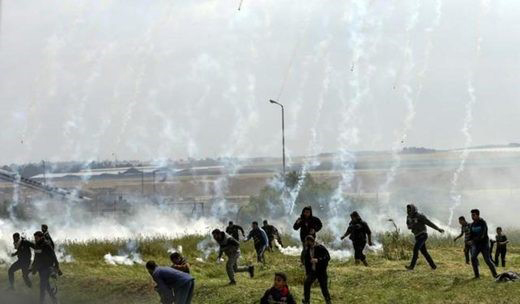 Palestinians fleeing as tear gas grenades begin to drop during a demonstration near the border with Israel east of Gaza City to commemorate Land Day.

Not before has Israel’s indifference to international law been so clear, so visible, so compelling as it has been through the lens of its repeated slaughter, over the month of April, in Gaza, as thousands of civilians have simply marched and marched in peace to say “enough”.

Today, more than 70 years after the judgments at Nuremberg, we are witnesses to an undeniable paradox as those victimized long ago by notions of racial, religious and political superiority have themselves become willing accomplished adherents of that same evil doctrine.
In words that shook the silence of the courtroom with the majesty of the moment war crimes prosecutor Robert H. Jackson passed, to generations to come, a reminder of the obligation companion to humanity: “We must never forget that the record on which we judge these defendants today is the record on which history will judge us tomorrow”.