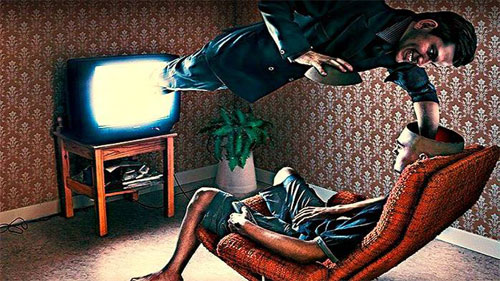 Have you ever overheard an intense or heart-wrenching discussion only to find out the talkers were actually hashing out the lives of fictional TV characters? Do you ever wonder why people are so easily beguiled into trusting the talking heads?

It might not be such a mystery when you find out how easy it is for TV programming – the waves it emits, the storytelling – to override basic brain function and even damage your body.

Reported earlier by Truthstream Media:
“Back in 1969, a man named Herbert Krugman conducted a series of experiments regarding the effect of television on a person’s brainwaves. What he found was pretty startling:
«Krugman monitored a person through many trials and found that in less than one minute of television viewing, the person’s brainwaves switched from Beta waves, brainwaves associated with active, logical thought, to primarily Alpha waves. When the subject stopped watching television and began reading a magazine, the brainwaves reverted to Beta waves.»

‘Beta’ is considered a normal, awake state, while ‘Alpha’ waves are experienced in a deep relaxation or ‘daydreaming’ state. When in the Alpha state, a person is subjected to a passive learning experience with the right side of the brain at the wheel, leaving critical thinking skills behind.”

When scientists study these effects, we often find out later that they were only trying to help corporate advertisers better influence you. They have even found that the brains of people watching movies together are snyced up! Is that a “syn” against individuality?

Jerry Mander also discussed the damages of unbridled technology like television in “Questions We Should Have Asked About Technology.” Even in the 1970s, he was arguing for the elimination of television. One of his reasons was the “death culture” – all the story lines, especially in the news were heading toward death obsession.

Think about how that has changed in 40 years and what that does to already hopeless people? That’s entertainment?

Speaking of which, here is a video that shows how television affects your brain chemistry for the worst. Yes, the waves entrain your brain for the greatest suggestibility – but it gets worse. Your mind gets confused and derailed by the condensed and unrealistic story lines. The imagery creates plenty of stress hormones – like the constant release of adrenaline – but with no outlet because we consciously try to tell ourselves that it’s just a show. Apparently, the brain and body disagree.

Does that explain how TV creates an artificial “high” and addiction?

The Plug-In Drug is a book that explains your brain on television and computers in greater detail.

Israel Is Censoring Bloggers, Especially Those Criticizing Its Ruthless Policies

Illuminati and Their Acolytes Working for Their ‘God’ Lucifer to Have Your Soul. It’s So Easy: They Want You to Just Accept Their NWO