Illuminati and Their Acolytes Working for Their ‘God’ Lucifer to Have Your Soul. It’s So Easy: They Want You to Just Accept Their NWO 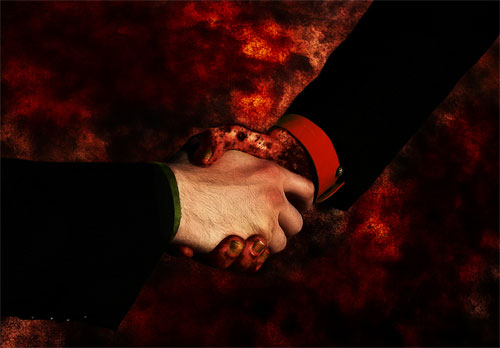 A few months ago, I was sitting at the deathbed of my wife – and these promises kept me from despairing. For I know by proof (the shroud of Turin is just one example) that death is not the end – but the beginning of life eternal.
The moment my wife died a happy smile brightened her expressionless, unconscious face for about four seconds. I have heard of so many near death experiences, also from my clinically dead – but resuscitated – patients that I am in no doubt: Not only the soul of Jesus Christ lives in eternity. Mortal man’s soul does, too.

So there is a desperate effort going on by the Devil, Satan, as Christ called this hateful being, his fallen and rejected brother acc. to the Book of Job 1:6 – Lucifer, as the Devil’s disciples, Illuminati and Masons, call him – to destroy the acme of God’s creation, mankind, instead of letting man find his way to God, his father, through his brother Jesus Christ (Matth. 25:14-30).
And Lucifer’s disciples have developed a nearly inescapable meshwork to catch your soul, they call it the New World Order (NWO) – which is nothing but Lucifer’s old world order – realization of man’s meanest character features: Good is evil and vice versa, truth is “fake news” and vice versa, etc.

Lucifer promises to give man material abundance but spiritual poverty – and to take his soul with him into destruction after death (Matth. 25, Rev. 19:20) – while God does not intervene until He decides to (Matt. 24, Luke 21)

This ongoing attempt by Lucifer (Mephistofeles) is the theme of Goethe’s famous Faust drama: “Es irrt der Mensch, so lange er strebt” (Man errs as long as he strives). In this phase, Mephistopheles cannot take Faust’s soul. However, if Faust should say and mean it: “Verweile Augenblick, du bist so schön” (Stay, moment, you are so beautiful), i.e. gives himself to the material kingdom of the “Prince of the World” (John 14:30) – then Dr. Faust belongs to Mephistopheles.

Both God and Lucifer want your soul out of your free will: to choose between Lucifer’s dull, soul-killing, short-lived, in the long run boring physical material joys or God’s everlasting satisfaction of your soul in a super-physical environment – as described by e.g. Dr. Eban Alexander in the short video at the begging of this article.

The Illuminati are doing all they can to recruit you for the first option – eradicating/mocking/concealing nearly all recruiting for the second option.
This latter endeavor is called “gas lighting”: A form of manipulation that seeks to sow seeds of doubt in a targeted individual or in members of a targeted group, hoping to make them question their own memory, perception, and sanity. (Flat Earth is a prime example.) Satanic possession is about turning reality upside down so evil is good and false is true (NWO)

Henry Makow, March 8, 2018: In the movie The Devil’s Advocate, based on the novel by Andrew Niederman and produced by Arnon Milchan and Arnold Kopelson, the Devil (Al Pacino) tells Kevin Lomax, the ambitious lawyer played by Keanu Reeves: “I only set the stage. Free will: you pull your own strings!”
He shows Kevin that he cannot blame anyone but himself. Kevin was driven by his own egotism and venality. He abandoned his wife in her hour of greatest need, and she committed suicide. He got many guilty people acquitted because he “never loses”.
Then the devil provides us with the Luciferian manifesto: Essentially it is the belief that man is defined by his carnal appetites and desires (greed, power, lust) rather than by his soul and spiritual ideals (truth, justice, beauty).

Man serves Lucifer by giving in to these temptations, by being an accomplice in his own destruction.
The Illuminati always has promoted indulging our base instincts calling this “sexual liberation” and “open marriage”. This undermines the family. Their psychology always has been against “repression” (i.e. self-discipline.) This view that man is a god (William Cooper), and his wishes are the measure of all things, is called “Secular Humanism” aka “Luciferianism”.

John Milton (the Devil): “Who are you carrying all those bricks for, anyway? God? Is that it? God? Well, I tell you, let me give you a little inside information about God. God likes to watch. He’s a prankster. Think about it. He gives man instincts. He gives you this extraordinary gift, and then what does He do, I swear, for His own amusement, His own private cosmic gag reel, He sets the rules in opposition. It’s the goof of all time. Look, but don’t touch. Touch, but don’t taste. Taste, don’t swallow. And while you’re jumpin’ from one foot to the next, what is He doing? He’s laughing! He’s a sadist! He’s an absentee landlord! Worship that? NEVER!”
Kevin Lomax: “Better to reign in Hell than serve in Heaven, is that it?”
John Milton (Devil): “Why not? I’m here on the ground with my nose in it since the whole thing began. I’ve nurtured every sensation man’s been inspired to have. I cared about what he wanted and I never judged him. Why? Because I never rejected him. In spite of all his imperfections, I’m a fan of man! I’m a humanist. Maybe the last humanist. Who, in their right mind, Kevin, could possibly deny the twentieth century was entirely mine?”
Kevin declines the Devil saying “No” is enough. We will not be accomplices in our own destruction. We will not forfeit our soul.

The Illuminati/Masons want your soul.
That’s why they’re so sloppy. Anyone can see that no planes hit the Pentagon or crashed at Shanksville. They want us to compromise ourselves by accepting these lies and not seeking justice for the victims. Thus, by our passivity and cowardice, morally we become their accomplices, practically collaborators.
If we go to the pop “music”, Hollywood expresses itself more explicitly in its videos, using MK-Ultra Monarch-raised sex kittens missioning for their Illuminati savior: Lucifer. I have written about MK Monarch sex kitten Katy Perry’s Black Horse, about Lady Gaga, Rihanna, and Madonna. For example, in the video below, Katy Perry openly admits she sold herself to the Devil:

Madonna is even worse off. In her Devil Pray song, she says: “My feet are getting warmer, I get weaker, Lucifer is nearer. Teach me how to pray, let the Devil pray, take my sins away, Mary, save my soul…” And the Devil says something incomprehensible.
It’s all just a matter of her harlot pay for her ramified services to Lucifer and the Illuminati. She is not able to free herself from Lucifer – because she has been educated a monarch-sex kitten like Katy Perry. In her Illuminati song she praises Lucifer’s all-seeing Illuminati eye.

Here is another example: Iggy Azalea, crowing for her Illuminati savior. She says the Devil has a grip on her:
“I feel like God playin’ tricks on me, got a fix on me,
Feel the weight of the world like I got a brick on me,
Had a dance with the devil and he got a grip on me,
I’m just tryin’ get to heaven, hope you got a ticket for me, huh.”

Why is there a bed inside this church in the following video, and why is Iggy laying on it? Is this where Iggy’s unholy marriage will be consummated? Inside the church? That’s the kind of stuff they do in satanic black masses. The video is full of occult dark symbolism, Iggy giving her “innocent white-clad self away – becoming a black-clad bad girl”. In the end she seems to find that she is her own savior! This is the senseless ultimate Antichristian gospel Lucifer can offer mankind!

As for being her own savior: This is the same as the Devil tells Kevin in The Devil’s Advocate: “I’m just setting the stage. Free will: you have to pull your own strings!” I.e. Then you are alone, left to yourself in a vacuum!
Christ said: “Teach them to observe all things whatsoever I have commanded you: and, lo, I am with you always, even unto the end of the world”. (Matth. 28:20). I.e. Christ also commands to pull our own strings – but then we are not alone – for He is propping and guiding our minds.

All terror actions in the US since WW2 have been Illuminati acts/false flags – often just psyops. They have all been suspicious to skeptical minds – not brainwashed by the Illuminati-owned MSM.
In at least 42 cases, governmentally admitted false flags within the last 75 years occurred – and in 2017, there was a false flag terror action in Europe every nine day. Episodes like the NATO Gladio, the London 7/7 train bombs in 2005, the Charlie Hebdo, Paris Nov. 13, 2015, Brussels false flag attack, the Manchester and the London City acts were so amateurish transparent that they were an insult to mankind’s intelligence.

I have also been wondering why the Illuminati stooges have not concealed their false flag crimes better. Is their purpose to show us their horrible power and ruthlessmess to intimidate us? Maybe they are already so sure of their final victory that they don’t care if their crimes are exposed?

We can call each other’s attention to the elements of this madness, so that with free will individuals may have qualified, existential choice between Lucifer, the father of lies (John 8:44), the Creator’s rejected son (Isaiah 14:12-14), and his brother, Jesus Christ, the judge of mankind (Matt 25) – so they can draw the informed consequences of their choice.

For this choice is the meaning of life.

Raging Against Self Defense: Psychiatrist Examines the Anti-Gun Mentality (3)