ICC crime of aggression comes into effect without key signatures 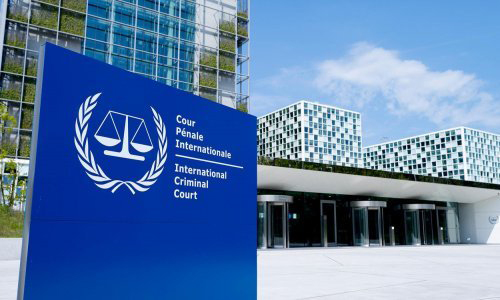 A crime of aggression, under which politicians and military leaders can be held individually responsible for invasions and other major attacks, comes into force at the International Criminal Court, reviving global legal powers last exercised at the Nuremburg and Tokyo war crimes trials of the 1940s.
Claims alleging that armed force has been used against the “sovereignty, territorial integrity or political independence” of another state can be taken to the tribunal in Hague, starting with July 2018.
The new offence cannot, however, be enforced retrospectively over conflicts such as the 2003 Iraq invasion.

There has been international pressure to give the ICC greater powers to pursue those deemed responsible for initiating conflicts.
About 35 countries have so far ratified the amendment bringing it into force, making their leaders liable to prosecution if they start a war. Britain is not among them.

States that have not ratified the crime of aggression could still be referred to the ICC by the UN Security Council, although the extent of that power is in dispute. Members of the Security Council are likely to veto any accusation made against them.
The UK, France and Japan were among countries that lobbied to delay the crime being activated on the grounds that there was need for “greater clarity” before it came into force.

Even without prosecutions, supporters of the law hope it will act as a deterrent by making politicians aware of potential international repercussions.
Sheryn Omeri, a London barrister who has worked at the ICC, said: “Symbolically, the aggression amendments and their ratification have had an important normative effect in the sense that there now is a stigma that can be attached to the actions of people even if prosecution, imprisonment or other punishment doesn’t follow.”

Geoffrey Robertson QC, who was a judge at the Sierra Leone war crimes tribunal, said: “It’s ironic that Britain, which stood so courageously against Hitler, should refuse to ratify the international law against aggression. And it’s ridiculous, at a time when we should be using that very law to denounce Russian aggression, constituted by sending agents with polonium and novichok to kill our citizens.

The Foreign Office under Boris Johnson vainly tried to sabotage the law’s progress – now it is in force, let us hope that his successor reverses this approach.
The law will henceforth apply to politicians and generals who give orders to invade. It is not retrospective, so Tony Blair will be safe. Of course, had this law been in force in 2003, it would probably would have deterred him from joining the invasion in Iraq, although George W Bush, with less respect for international law, would doubtless have gone ahead.”

Don Ferencz, an Oxford University academic who runs the Global Institute for the Prevention of Aggression, said: “That Britain played a leading role at Nuremberg in establishing the principle that world leaders who undertake illegal war-making may be held to account in a court of law is greatly to its credit.
Yet the fact that it has failed to join the countries which have voluntarily submitted to the international [criminal] court’s jurisdiction over the very same crime seems a clear repudiation of the principle that international law is meant to offer equal justice for all.” Ferencz’s father was a prosecutor at the Nuremberg trials.

In 2017 a former Iraqi general attempted to launch a private prosecution against Blair in the London courts over the former prime minister’s role in the 2003 invasion of Iraq, on the grounds that he had committed the crime of aggression.
The high court judges recognized that a crime of aggression was in the process of being incorporated into international law, but said it did not apply retroactively. They ruled that there was no crime in English law under which Blair could be charged.

A Foreign Office spokesperson said: “The UK has no plans to ratify the crime of aggression amendments. We believe that the UN Security Council bears the main responsibility for maintaining international peace and security, and should be the primary body to determine when an act of aggression has occurred.”

In December 2017, the ICC assembly of states parties considered how and when to activate the court’s jurisdiction and confirmed that the court does not have jurisdiction in respect of the territory or nationals of any state that has not accepted the crime of aggression amendments unless there was a UN Security Council resolution.

Signs of a Clogged Lymphatic System – 10 Ways to Cleanse It