In Brief
– The Facts: A model of the way the THz waves interact with DNA explains how DNA damage may occur and why evidence has been so hard to gather. This is simply a model, it’s not experimental, but it does raise cause for concern.
– Reflect On: Why are so many technologies approved for use without conducting the appropriate safety tests first? Studies have already shown cause for concern, yet too often the research goes ignored. 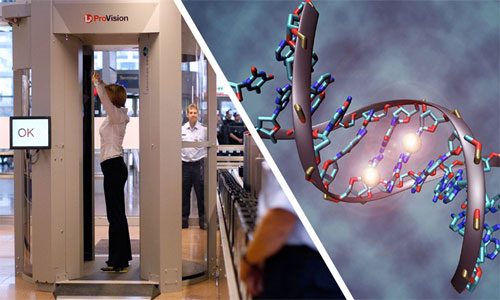 What are Terahertz waves? They’re the radiation that fills the spot between microwaves and infrared waves on the electromagnetic spectrum. These waves can pass through non-conducting materials like clothes, brick, wood, paper, etc. As a result, they can be utilized within cameras to look inside an enclosed structure, or sealed envelopes, into living rooms in order to “frisk” people at a distance.

It’s not just Terahertz waves, it’s multiple sources of electromagnetic radiation. In the past, there were no artificial sources of electromagnetic radiation. Now, we are bombarded with them. Cell phones, wifi, 5G and numerous other sources are all heavily present in our environment, and the corporations putting out this technology have not done any appropriate safety testing. The studies that have emerged about this subject are eye-opening and very concerning.

The statement below comes from Dr. Sharon Goldberg, an internal medicine physician. Dr. Goldberg announced this at Michigan’s 5G Small Cell tower legislation hearing. You can watch that here.

“Wireless radiation has biological effects. Period. This is no longer a subject for debate when you look at PubMed and the peer-review literature. These effects are seen in all life forms; plants, animals, insects, microbes. In humans, we have clear evidence of cancer now: there is no question. We have evidence of DNA damage, cardiomyopathy, which is the precursor of congestive heart failure, neuropsychiatric effects.”

Dr. Martin Blank, Ph.D., from the Department of Physiology and Cellular Biophysics at Colombia University, is one of the leading experts in this area of study. He explained:
“Putting it bluntly they (EMFs) are damaging the living cells in our bodies and killing many of us prematurely.”

10 Reasons 5G Should Scare You

There are thousands of peer-reviewed studies on this subject, and hundreds of scientists have been petitioning the United Nations to pay attention. The problem is the industry and how they’ve taken over medical science. Information about harmful technological products that make a very small group of people billions of dollars every year is somehow brushed under the rug. Corporate control over science and government health regulators like the FDA and CDC is completely out of control.

Boian S. Alexandrov has conducted a research at the Center for Nonlinear Studies at Los Alamos National Laboratory in New Mexico. It revealed that these Terahertz waves could “unzip double-stranded DNA, creating bubbles that could significantly interfere with processes such as gene expression and DNA replication.”

This is concerning because Terahertz waves are used, as previously mentioned, to peer through things. Airport scanners are a perfect example. That does not mean that airport scanners can rip apart DNA, but it does suggest we need further testing on these instruments. These Terahertz waves are absorbed and emitted can also be used to determine the chemical composition of a material. Even though they don’t travel far inside the body, there is hope that the waves can be used to spot tumours near the surface of the skin.

The author of the study states:
“With all the potential, it’s no wonder that research on terahertz waves has exploded in the last ten years or so.”

He then asks the question:
“But what of the health effects of terahertz waves? At first glance, it’s easy to dismiss any notion that they can be damaging. Terahertz photons are not energetic enough to break chemical bonds or ionise atoms or molecules, the chief reasons why higher energy photons such as x-rays and UV rays are so bad for us. But could there be another mechanism at work?”

Apparently, the evidence that Terahertz radiation (which is different from the wireless and other EMF radiation that’s put out by multiple devices) damages biological systems is mixed. Alexandrov outlines how some studies reported significant damage, while others showed none. 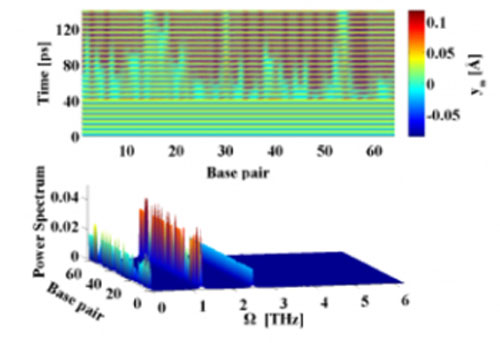 This is concerning, regardless of how many studies have shown no DNA damage. The fact is that there are studies that do show damage. Even if only one study proved that there could be DNA damage, it’s confusing as to why this technology would be approved.

Alexandrov and his team created a model to investigate how the fields interact with double-stranded DNA. What they found was remarkable.

“They say that although the forces generated are tiny, resonant effects allow THz waves to unzip double-stranded DNA, creating bubbles in the double strand that could significantly interfere with processes such as gene expression and DNA replication. That’s a draw dropping conclusion.”

It’s important to note that this particular study was a model, it wasn’t actually experimental. However, the team still presented enough information to suggest this technology could be dangerous to our health, especially given the hazardous biological effects of other waves on the electromagnetic spectrum.

“This should set the cat among the pigeons. Of course, terahertz waves are a natural part of environment, just like visible and infrared light. But a new generation of cameras are set to appear that not only record terahertz waves but also bombard us with them. And if our exposure is set to increase, the question that urgently needs answering is what level of terahertz exposure is safe.”

The last point made in the quote above is important to note. We’ve never been bombard this much – our exposure has never been so high.

North America also seems to be running behind, as multiple countries have completely banned wifi technology and cell phones in nursing homes and elementary schools because of the dangerous effects these technologies can have on our health.

It’s concerning that we are approving technology that use these types of waves when one of the only studies on this subject outlines how “research in this field has only just begun, both at home and abroad. In this paper, research progress with respect to THz radiation, including its biological effects, mechanisms and methods of protection, will be reviewed.” (Source)

That paper goes on to emphasize that, although many biological effects are unknown, tremendous advancements in medical technology could come from their use. This wouldn’t be the first time we’ve seen potentially dangerous technologies being used in the healthcare system, such as mammograms.

Who knows! Probably we will have to wait and see until more research emerges. At the end of the day, a lot of technology and pharmaceuticals we use have not gone through appropriate safety testing, and so we may be seeing the same thing here.
If you want to see some of this science, the best place place to start your research is with the Environmental Health Trust.

Although it’s unclear what will happen here, there is still so much electromagnetic radiation in our environment that it’s important to protect yourself. There are many things you can do to combat electromagnetic radiation. You can have a wired internet connection, unplug all of your devices before you sleep, purchase EMF protective clothing, and even paint your walls with EMF protective paint. You can live a healthy lifestyle, but the mind body connection is so strong that anything can be mitigated through the deepest levels of healing.

Yoga as breast cancer therapy: The benefits are not all psychological – physical benefits include reduction in swelling around the lymph nodes