Yoga as breast cancer therapy: The benefits are not all psychological – physical benefits include reduction in swelling around the lymph nodes

In case you still weren’t sure about whether or not cancer is one of the worst things that can ever happen to anyone, you only need to look at what happens with most female cancer patients after they have undergone treatment. In the case of breast cancer patients, it’s possible to suffer from a related condition that tends to pop up right after an intervention. 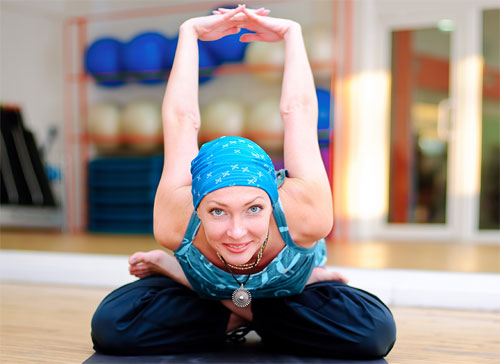 The related condition that tends to appear after breast cancer interventions is called lymphedema. It’s a genetic condition that can appear in patients, along with a whole host of other things, almost immediately after an intervention. Is there any way to prevent these?

Most conditions have dedicated cures and ways of treatment, of course, but some experts have found a seemingly unlikely solution. It comes in the form of yoga, the age-old practice or discipline that aims to offer better health and relaxation through different techniques of breath control, the adoption of specific bodily postures, and simple meditation. How exactly does yoga help?

To understand the motivation of the experts that managed to uncover the importance of yoga in cancer and lymphedema intervention, it’s important to know a little bit about yoga’s place in general, as far as the medical world and cancer treatment are concerned. It is said that yoga therapy has been tried on patients who are looking for ways to treat their breast cancer conditions, and in some cases, the same has also been done on patients with lymphedema. So the group of researchers looked at the situation and figured that it would be beneficial to find out exactly how helpful yoga therapy can be for the intervention of these two conditions.

As it turns out, yoga therapy can be good for patients indeed, and not just in a psychological way. In fact, there are psychological as well as medical benefits to yoga therapy, and there is a fair amount of research work that proves this is true for patients with either breast cancer or lymphedema. In cases where the effects of yoga therapy on patients were measured, the researchers were able to record positive results.

Some of the positive effects of yoga therapy include reduced swelling around the lymph nodes, which helps patients to better deal with their conditions. This is according to research conducted by a group led by James M. McKivigan, a Physical Therapist and Chiropractor from Touro University in Henderson, Nevada.

According to the notes of the researchers, lymphedema is a disease that is caused by a compromised lymphatic system. It’s a condition that occurs, mostly in breast cancer patients, when localized fluid retention happens and the swelling of tissue after injury to a patient’s lymphatic system also happens. Any injury to a person’s lymphatic system can trigger it, in fact. And that is where the helpful yoga therapy can come in.

Based on a number of studies that were reviewed by the researchers, it is said that yoga therapy is a critical intervention strategy, at least as far as treating lymphedema in breast cancer patients is concerned. The research also states that the effectiveness of yoga intervention can be assessed by evaluating the number of people that have been helped by the method. It’s also imperative, according to the researchers, that the patients who did go through yoga therapy and recorded positive benefits be interviewed and examined to find out how much their conditions have been improved. After all, the positive benefits may not be true for all patients.

For now, the research into the effectiveness of yoga therapy on patients with either lymphedema or breast cancer will continue. But as long as yoga remains a well-known practice, there will be a place for it in the treatment of such conditions, especially if it keeps giving positive results. As the study notes in its conclusion, “This study will be beneficial as it will positively support the use of yoga therapy in treating lymphedema among breast cancer patients.”