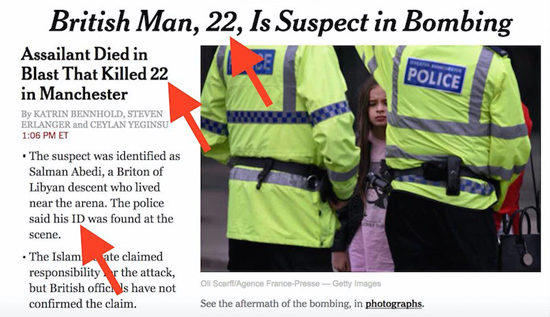 The New York Times, “all the New World Order that’s fit to print”, featured the signature numeral 22 in both the headline and subhead – and mentioned the “fortuitous ID” that somehow always turns up to finger the patsies.

Following the May 22 tragedy in Manchester, the term “false flag” is the hot meme.
A scandal has developed in the UK as Labour Party activist Debbie Hicks was being shouted down by the Establishment for pointing out that Theresa May would hugely benefit from the 22-22-22 Manchester spectacle. As the Daily Mail reported: 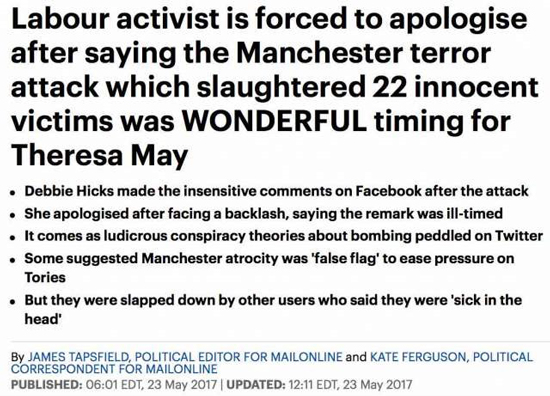 The Daily Mail informs us: “Miss Hicks, who last year (2016) stood for Labour in the local elections in her hometown of Stroud in Gloucestershire, wrote: ‘What has happened in Manchester is awful and my thoughts are with the families. However, I can’t help thinking this is wonderful timing for Theresa May. It is well known that politicians use events as part of their campaigns or messages’.”

And it wasn’t just Debbie Hicks suggesting the 22/22/22 Manchester event was a false flag. The Mail reported “a slew” of Twitter comments all agreeing that this looks like a false flag. One was from X-factor star Steve Brookstein. 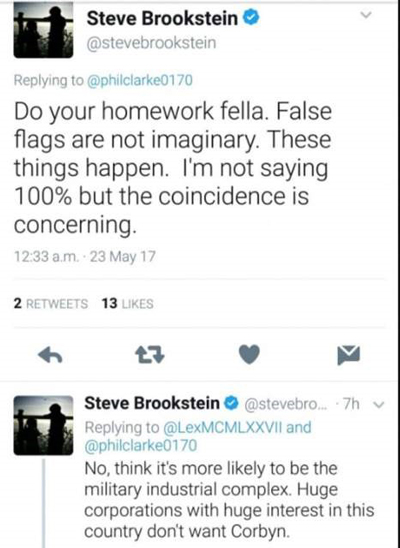 Even CNN was calling this a likely false flag! And get this: Infowars website was outraged! Has the world turned upside down?

When a suspected false flag raises its ugly head, the first question is always: “Who benefits?”
The June 8, 2017, British election pitted Establishment front-woman Theresa May against insurgent Labour leader Jeremy Corbyn. Corbyn, a supporter of the 9/11 truth movement, was a close friend of former Environment Minister Michael Meacher, who died mysteriously shortly after agreeing to push for an independent British investigation of 9/11.

As Veterans Today wrote shortly after Meacher’s death: “Meacher suddenly dropped dead ‘after quite a short illness’. He had been in perfect health, and was mounting a low-key campaign to open an official inquest into 9/11 on behalf of British victims’ family members. Meacher’s death is just one of many – most notably that of WTC 7 demolition witness Barry Jennings – that were all-too-convenient for the forces behind the 9/11 cover-up.”

The British Establishment (led by the City of London banksters) stopped at nothing to make sure that 9/11 truth supporter Jeremy Corbyn – who is also a threat to expose the elite paedophile network – lost to Theresa May. And the obvious way to do that was to stage a huge false flag to make the people “rally around the Union Jack” behind their leader, Theresa May.

Veterans Today editor Ian Greenhalgh pointed out that “it is very significant they chose to attack young people, as Corbyn’s support is by far the strongest amongst the young.” The strategic political choice to attack young people is reminiscent of the 11/13/15 attack on Paris’s Bataclan theatre. That attack, many analysts have suggested, was designed to curtail the surge of support for Palestine among the French jeunesse.

Ian continued: “I’ve been to concerts in that venue, you can’t get in without being searched and that goes back as far as seeing ACDC there in 1994. They have bars inside where they sell alcohol, so they search everyone for bottles, cans etc. There is always a big pile of confiscated bottles by the door. So if they weren’t searching people, I bet it wasn’t the usual security people. That in itself smells of op.”

Was Manchester a false flag? The recurrence of the numeral 22: 22 victims, a 22-year-old perpetrator, on May 22 – is a dead giveaway. 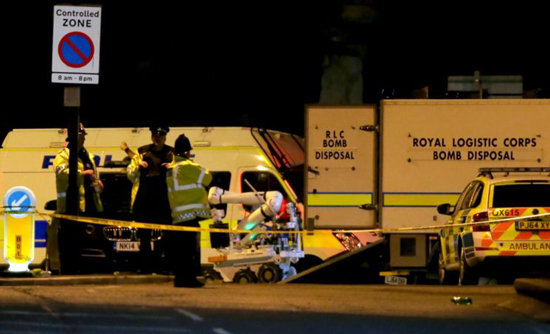 The Freemasonic cabal responsible for false flag events often “signs” their work by prominently featuring the number 11 or its multiples. 9/11/01 and 11/22/63 are prominent examples, as well as the London attacks on March 22.

There were also the usual “terror drills” ahead of the live event.
The perpetrator, as always, was “well known to the authorities”. As always, Rita Kaatz of the Israeli Mossad spin-off site claimed responsibility on behalf of her #1 client, ISIS. And as always, the perpetrator/patsy was kind enough to bring along an ID card and make sure it would quickly be found.

In short, all of the preliminary indications suggest that we are looking at yet another false flag.

Additionally, one of the most important alternative journalists who exposez false flag attacks, to Ole Dammegard, predicted an upcoming Manchester attack before it happened. Ole pointed out that the Manchester attack occurred on the fourth anniversary of the fake beheading of Lee Rigby in Woolwich. He also noted the false flaggers’ odd penchant for staging their spectacles on the 22nd of the month:

As always, Wikipedia appeared with the signed-sealed-and-delivered version of the official story almost instantly.

Did the Manchester (suspected) false flag destroy the candidacy of another left-leaning insurgent, Jeremy Corbyn, the way the pre-election French false flags stymied Melenchon’s surge? The British voters did not prove themselves more sophisticated than their French counterparts, and missed the chance to send Theresa May and her false-flagging entourage down to a well-deserved defeat.