As many readers know, we are living in an era of blatant evil, disregard for humanity, illegal wars, manufactured terrorism, broad corruption without consequences and outright tyranny as the global network of criminals pushing for their new world order continue to do whatever it takes to reach their stated goals. In the midst of this ongoing process truth seekers find themselves (ourselves) in an intense information war against these ruling elite. This information war strikes at the very heart of what the ruling elite do. In other words, humanity is in the state that it is in because of the information war carefully plotted and waged against humanity by the ruling elite using their information war mechanisms (CIA, US military Intelligence, Special Forces, NGOs, transnational corporations, non-profit organizations etc). These information war mechanisms and entities, however, are systematically being exposed and stripped completely of their privacy as humanity awakens to their schemes and deceptions designed to enslave, oppress and kill off a sizable segment of humanity for their financial and personal gain. 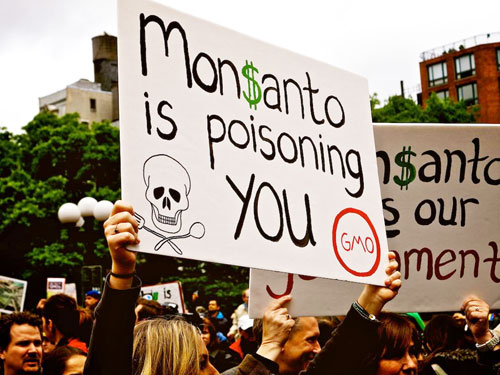 On the heels of the revelation that the Pentagon paid a UK PR firm to produce fake terrorism videos for the purposes of manufacturing civil unrest and conflict (like we didn’t know that already) in Iraq, it’s nice to see that more and more of the ruling elite’s plans are now being widely revealed for the world to see who the bad guys are and how they operate.

In an information war which guarantees to be a roller-coaster of emotions for truth seekers involving both moments of hopefulness and helplessness it is now revealed that the environmental terrorist organization known as Monsanto has been officially the target of what amounts to a crimes against humanity (and the planet) tribunal in Hague Netherlands officially began on Friday October 14, 2016.

This tribunal consisted of five international judges listening to the testimonies of thirty witnesses and experts from around the world as they tell their stories profiling the nature of Monsanto’s environmental terrorism on humanity and the planet. A website dedicated to this tribunal (monsantotribunal.org) details some of the background and specifics surrounding the goals of this upcoming tribunal.

The aim of the Tribunal is to give a legal opinion on the environmental and health damage caused by the multinational Monsanto. This would add to the international debate to include the crime of Ecocide into international criminal law. It would also give people all over the world a well documented legal file to be used in lawsuits against Monsanto and similar chemical companies.

Critics of Monsanto claim that the company has been able to ignore the human and environmental damage caused by its products and pursue it devastating activities through a systematic concealment strategy through lobbying regulators and government authorities, lying, corruption, commissioning bogus scientific studies, putting pressure on independent scientists and manipulating the press.

The tribunal’s endeavor is based on the observation that only through civic action will we be able to achieve compensation for victims of the American multinational. The procedures are a veritable obstacle course for the victims. They are reluctant to invest time and money in litigation, especially since there is no reason to believe in a positive outcome. Frequently, when a company like Monsanto is the defendant, the company settles out of court, whereby circumventing the establishment of a negative legal precedent.

General purpose of the Tribunal:
To get a ruling − even symbolic – against Monsanto by a bench of real judges, after veritable proceedings in an international court and contribute to the establishment of international mechanisms to bring justice to victims of multinationals.

Specific objectives:
– Assess the case against Monsanto and the damages caused pursuant to international law;
– Assess Monsanto’s actions in relation to the crime of ecocide. Citizens’ movements have made an appeal for international criminal law to recognize this as a crime;
– Consider a possible amendment of the Rome Statute establishing the International;
– Criminal Court to include the crime of ecocide, making it possible to try natural and legal persons for this crime.

As you can see, this tribunal is only looking to set the groundwork for a system that needs to be in place for not only halting all of Monsanto’s global genocidal activities but for eventually holding the criminals that run Monsanto and the conspirators who invest in this terrorist entity accountable for their direct and indirect crimes against humanity.

Interestingly, this tribunal holds Monsanto to the standards of the UN’s Agenda 21/Agenda 2030 which calls for things like “sustainable environment” the right to eat healthy food, the right to the enjoyment of the highest standard of health, and even the violation of the freedom of scientific research. Above and beyond all of this, the very serious question of Monsanto’s outright war crimes against humanity have been posed.

Ironically these questions will ultimately be posed to the UN, the same system that labels the natural and necessary nutrient known as CO2 a “pollutant” so it will be interesting to say the least to see what if anything comes of this on the part of the United Nations. 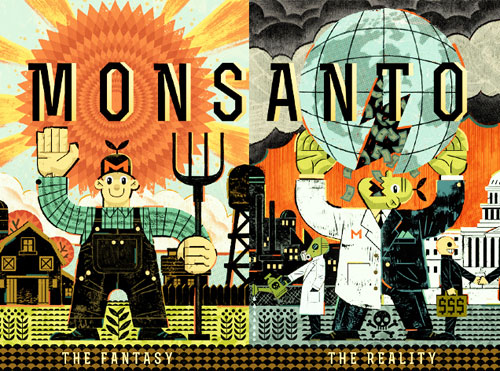 That the UN labels CO2, arguably the most necessary compound in the planet (O2 notwithstanding) as a “pollutant” but needs to be prodded and pushed to recognize Monsanto’s obvious callous crimes against humanity and nature is alarming in and of itself. While CO2 is the source of all plant life on Earth and thus central to life as we know it, Monsanto has poisoned the planet with their GMO seeds and glyphosate-laced Roundup (admitted to be toxic by the CDC) which has caused irreversible damage to the planet and humanity. The spectrum of genetic and biochemical damage caused by Monsanto’s poisons range from the unnecessary murder of tiny insects needed for the ecologic balance of nature to the destruction and killing of plants around the world, to the poisoning of animals and humans as rates of birth defects, cancer, endocrine disruption and much more have all risen, many which have been associated with Monsanto-like poisons.

You may be wondering, how did we get here? As the tribunal summary indicates, by greed and corruption. Monsanto has employed the same model as the vaccine industry; make profits, pay hush money to those that are injured or killed by your product and wage an information war of propaganda against your enemies even as the scientific community admits there is no proof that GMOs are safe and scientific evidence proves that GMOs are directly associated with the development of tumors in rats (Seralini study) when given for a duration of time comparable to the lifespan of that creature (unlike the Monsanto’s deceptive “6 month” studies with rats).

In the worst-case scenario, this at least serves as a formal record for the future of humanity to see the criminal actions of Monsanto, and hopefully it can be a stepping stone toward justice and accountability even if it borrows the new world order’s language of “sustainability” and “prosperity”.

The Monsanto Tribunal is an international civil society initiative to hold Monsanto accountable for human rights violations, for crimes against humanity, and for ecocide. Eminent judges heard testimonies from victims, and will deliver an advisory opinion following procedures of the International Court of Justice. A distinct and parallel event, the People’s Assembly, was a gathering of social movements from all over the world that exchanged ideas and planned for the future we want. The Tribunal and People’s Assembly took place between 14 and 16 October 2016 in Hague, Netherlands.

During those days the world was watching witnesses’ testimonies, lawyers’ pleas, and the first impressions of the judges. It have been 750 participants in Hague representing 30 nationalities from all over the world, thousands were following online on the livestream and social media, and the Tribunal received a lot of press attention.

After the press conference on Friday (October 14) and the first session of the People’s Assembly, the hearings of the Monsanto Tribunal started on Saturday morning at 8:30. Corinne Lepage, lawyer and former French Minister of the Environment, pronounced the first words before leaving the floor to the Judges, the witnesses and the experts.

Glyphosate was a central topic on the first day of hearings and indeed, Monsanto Tribunal organizers and participants received a strong message of support from Colombia, a country where people and communities are severely affected by glyphosate spraying: “The National Association of Peasant Reserve Zones – ANZORC welcomes the materialization of Monsanto’s Tribunal and the People’s Assembly. […] We are optimistic that the results of the Monsanto Tribunal will reveal the company and make it accountable for the multiple crimes arising from the use of genetically modified seeds and pesticides. Furthermore, we will remain vigilant of the results of the People’s Assembly and the roadmap to carry on the global struggle for land, territory and life in the fields around the world.”

Sabine Grataloup from France was the first victim to give her testimony. She was exposed to Roundup at an early stage of her pregnancy.

Timothy Litzenburg is a lawyer representing about a thousand Americans who developed the non-Hodgkin’s Lymphoma due to exposure to glyphosate containing products, including Christine Sheppard, a coffee grower from Hawaii, who also presented as a witness. He seeks to hold Monsanto accountable by filing individual lawsuits in US courts.

Farida Akhter, who participated in the People’s Assembly on Friday was also at the Tribunal to talk about the risks of GMO eggplant in Bangladesh.

After the press conference Valérie Cabanes, lawyer and spokesperson for End Ecocide on Earth, highlighted the importance of the Monsanto Tribunal in the recognition of ecocide as a crime in international law.

The atmosphere was overall very serious at the Tribunal but very busy during the breaks during which many journalists interviewed the victims.

The People’s Assembly also started on Friday afternoon with a session on the theme of A Century of Ecocide and Genocide – three rounds of workshops took place on the subjects of GMOs, Pesticides, Seeds, Corporate Accountability and Agroecology as the Way Forward.

The hearings of the Monsanto Tribunal have been very impressive, and so was the People’s Assembly. 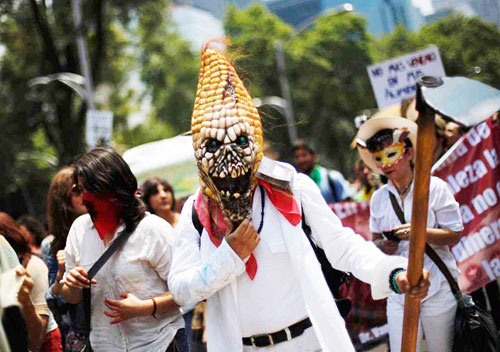 Judge Tulkens, Chairwoman of the Tribunal and former Vice-President of the European Court of Human Rights, said at the end: “[The legal opinion] will be addressed to Monsanto and to the United Nations. From this legal opinion, other jurisdictions can be involved and more judges will step in. We, as the judges [at the Monsanto Tribunal] have seen, heard, noted and deliberated. Chances are that the international law will take into consideration new issues such as the ones related to ecocide.”
The Court resolution is wated.

A significant consequence after hearings: a witness in Monsanto Tribunal have been harassed at University of Rosario in Argentina. His office was closed, members of the team that exposes effects of pesticides and GMOs were fired.

If Monsanto is not held criminally responsible for their crimes against humanity this will also tell you all you need to know about the true nature of the pseudo “global authority” known as the United Nations, which to this day has no credibility when it comes to true justice and human rights worldwide. Failure to take decisive action against Monsanto’s atrocities against humanity and the planet will offer an opportunity to once again prove the fraudulent front that the UN represents in the first place. Let’s not forget the UN is also the useless “official” government body of the new world order conveniently created by the ruling elite themselves after World War II. Thus getting one’s hopes up too high about this upcoming tribunal without acknowledging the true nature and commitment of the UN is naive.