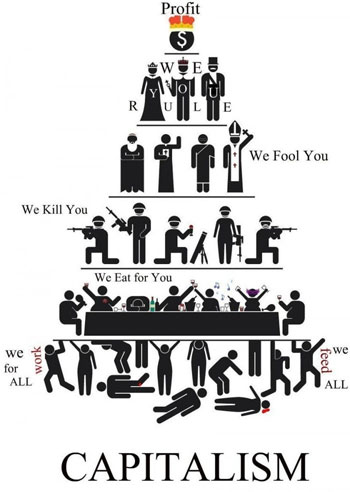 Capitalism is at the precipice of what it is capable of, and what is possible with it. Nevertheless, its proponents are perpetually swearing that it spurred tremendous development, yet it is the cause of so much industrial waste, and environmental destruction.
So much wealth of scientific knowledge have been purposely suppressed with the cooperation of the government for the purpose of preserving the need to consume and produce more, just to sustain commerce and capitalism, and its compatible patronage politics. Both share the same motivation to profit and rule. However, the people need not be ruled. Everybody should learn about deep thinking to make way for enlightenment, vision and wisdom. That’s the only way that the people will eventually learn to govern themselves.

In contrast, the present control system run by the State is grossly inefficient and spiritually destructive. For how long should this regressive system to continue?

Capitalism as a system is now increasingly challenged. Critics proliferate and steadily deepen their opposition (alongside, of course, the persistence of capitalism’s defenders). Yet capitalism’s traditional “other” – namely, socialism – has also been widely devalued. It has lost its position as the goal (however variously interpreted) for anti-capitalist social movements.

When not simply ignored, socialism (and even more its derivative “communism”) is often treated as utterly passé. When taken seriously, it is mostly a vague rhetorical gesture expressing criticism of the capitalist status quo, not advocacy of a concrete alternative. Socialist parties now mainly support capitalism but with a human face – i.e. with the social supports and safety nets that their “conservative” counterparts disdain.

Sometimes the advocacy of socialism expresses a systemic rejection of, or opposition to, capitalism. But even then, the current use of the term “socialism” lacks a clear, concrete definition of what genuinely new economic system it entails. What exactly differentiates it from and renders it superior both to capitalism and to what “old” socialism used to mean?

To enrich and strengthen anti-capitalism by giving it such a new, definitive goal, all members of society need to revision socialism. On the one hand that means shedding accumulated historical baggage that now undermines and prevents socialism from being a prominent goal of social change.

On the other hand, a revised socialism requires new content that can inspire and motivate. Old socialism’s drawn-out demise since the 1970s helped give birth to a new XXI century socialism whose basic contours can now contrast with old socialism. The old socialism that evolved across the XIX and XX centuries eventually settled its many, rich debates by largely agreeing on two basic ways to distinguish itself from capitalism.

Capitalism entailed:
1. Private enterprises to produce goods and services.
2. Markets as the means to distribute resources and products among enterprises and individuals (workers and consumers).

Once socialists had captured state power in the USSR, the People’s Republic of China (PRC) and elsewhere, the demands of managing actual economies tilted socialism’s focus ever further toward state enterprises and central planning mechanisms. In perfectly parallel fashion, attacks upon socialism from devotees of capitalism stressed the failures and excesses of state enterprises and planning.

Many of those debates and struggles seemed to be resolved by the collapse of the USSR in 1989 and subsequent changes in Eastern Europe, the PRC and elsewhere. History, the devotees of capitalism crowed, had “proven” the non-viability of socialism, the superiority of capitalism. They rarely grasped that what had failed was one version of socialism, an early experiment in what it might mean to construct a system beyond capitalism. Their eagerness to claim that “socialism/communism had failed” conveniently forgot the many similarly “failed” efforts, centuries earlier, to construct capitalism out of a declining European feudalism. Only after many such failures did changed social conditions enable a general system change to modern capitalism. Why would the same not apply to socialism qua successor to capitalism?

A major task for socialists has been honestly to admit and contend with the limits and failures of the old XIX and XX century socialism: chiefly, excesses of over-concentrated state power and inadequately transformed production systems. Old socialism’s achievements – especially rapid industrial development and the remarkable provision of social safety nets – might be preserved and built upon if its limits and failures were also recognized and overcome.

One emerging and promising new socialism for the XXI century focuses on worker co-ops. Socialism becomes the campaign to establish and build a sizable worker co-op sector within contemporary capitalism. In worker co-op enterprises, all workers are equal members of a democratically run production operation. They debate and decide what, how and where to produce and how to utilize the net revenues. Worker co-op enterprises exist alongside traditional capitalist enterprises. They are eligible for and must obtain tax considerations, subsidies and state supports comparable to what capitalist enterprises received throughout capitalism’s history.

Indeed, in their initial, emergent phase, worker co-ops deserve extra government support so that the worker co-op sector quickly achieves a significant role in the economy. Until that role is established, people will remain unable to evaluate, compare and weigh in on what mix of capitalist and worker co-op enterprises they wish for their society.

The worker co-op sector of an economy will have to decide what mix of market and planning mechanisms to utilize for the distribution of its resources and products (much as capitalist enterprises always did). The relationships – both competitive and cooperative – between the two sectors of each economy (capitalist and worker co-op) will have to be determined by negotiations between them. The third member of those negotiations will be the populace as a whole weighing in on what kind of economic system it wants as the partner for its political system.

With a significant worker co-op sector, the state’s dependence on enterprises will no longer mean a dependence on a small minority: shareholders and boards of directors who control capitalist enterprises. Instead it will mean, at least in part, the state’s dependence on masses of workers who democratically control worker co-ops. Under such a system, the prospects for genuine (as opposed to merely formal) political democracy are much enhanced over their sorry state today.

Mass working class support made XIX and XX century socialism – with its programs of revolutionary or evolutionary/parliamentary seizures of state power – historically important. It’s not expected to mobilize again any equivalent support for a revival of the old socialism. That is because of its limits and failures and also because of the massive, sustained campaigns against it by capitalism’s supporters. However, a new socialism built upon the best achievements of the old plus a new focus on the democratic transformation of the workplace can mobilize mass support now. It is already doing so. 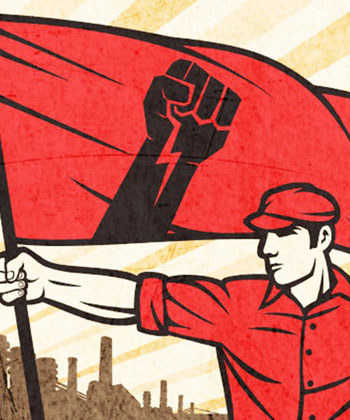 A new socialism for the XXI century would address as well all those in the population who are not in the workforce because of family, age, education, illness, disability or other comparable causes. Systematic supports for them – qua relatives, friends and neighbors of workforce member – are as central to a new and better society as is the democratization of the workplace. Indeed, the latter and the former can and would be mutually supportive.

Old socialist parties are mostly fading or imploding, yet at the same time capitalism’s deepening difficulties, especially since the global crash of 2008, are everywhere increasing mass opposition to capitalism. What that opposition needs is a new socialism with attractive, basic transformative goals. What is not wanted is social change that gives power to some far-away government apparatus.

The point is rather and finally to transfer power into the hands of the change-making workers themselves. Power here refers to more than politics. It refers to the social power at the economic base of society, in the workplaces producing the goods and services upon which social life depends.

The French Revolution’s slogan – liberty, equality, fraternity – was linked to its economic project of displacing feudalism in favor of capitalism. While its economic project succeeded, it failed to realize that slogan. It turned out, as Marx noted, that capitalism’s class division (between employer and employee) blocked that realization. Overcoming such class divisions – something a worker co-op can do – is required to take the next great historical step toward liberty, equality and fraternity.

The establishment of worker coops is one idea for a transition to a resource-based economy. This should make way for the full implementation of automation that will be according to an Open Source design and under the full control of the people, and not by the Corporatocracy.

Everyone must benefit from the collective scientific and technological advancements. None can make the economic and political freedom happen if the society continues relying on politicians for direction.