Mum Of Gardasil-Injured daughter Takes On ‘Haters’ And Says: “I Am NOT Working A Scam!” 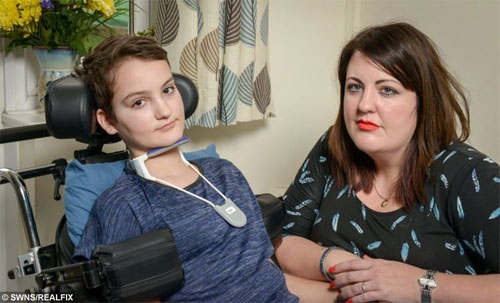 In February 2017 Your News Wire published the story of Mia Blesky, the 12-year-old girl who’s been paralysed since having the first dose of the Gardasil vaccine.

The story went viral with millions of views worldwide and was generally received positively and sympathetically, with many people donating to the GoFundMe fund that Mia’s mum Gini had set up.

Mia’s story was also picked up by several other websites and by the Mirror online in the UK.

Gini and Mia were overwhelmed by the response. As Gini said: “We have had thousands of amazingly supportive comments and messages and we’re incredibly grateful to everyone who took the time to respond. I make a point of reading a selection of these positive messages to Mia daily and it really cheers her up. We’ve also had lots of suggestions on how to help Mia, which we’re now looking into.”

Sadly, however, there were some people who chose to attack – claiming that the story was a work of fiction and that it was being used to scam the public. Trolls pestered Gini and her family, brandishing all kinds of accusations, saying that Mia was faking her illness, that Gini was lying and that Your News Wire – were colluding with them both.

Here are a few of the comments the trolls made under Gini’s original post on Facebook about her daughter:
“Scam!”
“Scam ARTIST!”
“Why would a mother do this to her own daughter?”
“Liar!”
“It’s not the vaccine – she was already ill.”
“She was well enough to go to see Adele!”
“You’re just doing this to get money.”
“It’s another FB scam.”
“Why are you trying to scare people?”

Some of these comments are referring to Twitter posts Gini made in early 2016 when Gini mentions how pleased she is that her daughter is now well enough to go to see Adele in concert having suffered from a debilitating virus the previous October. The haters seemed to think that it was this virus and not the vaccine that was the cause of paralysis Mia suffered within 24 hours of having the Gardasil injection. 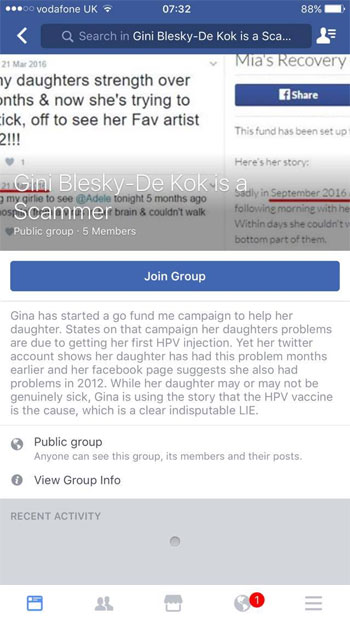 Screengrab of Facebook hate group accusing Gina of operating a scam (which Gini has reported as harassment).

Gini said: “I’ve got thick skin and I understand that trolls will always attack any story like this that goes viral. Some of the comments were especially nasty though and Mia can read them. Luckily, I was able to block and delete some of the really horrible ones.”

Referring to the attacks from trolls, she goes on to say: “What some people may have read in March and April 2016 were Tweets about a virus Mia had the previous October, which physically impaired her and affected her weight-bearing ability. Back then, despite the virus, she was able to move her legs and do physiotherapy. She had treatment and made a full recovery.”

Describing the day Mia had the vaccine, Gini said: “She had the HPV Gardasil vaccination on 21st September 2016 and woke up on 22nd September with heavy legs, which within hours, she struggled to use.” In the following months, Mia lost the use of her whole body.

In response to being labelled an anti-vaxxer, Gini added: “I am not anti-vaccine: I genuinely believe that Mia had a bad reaction to Gardasil and I just want some help for her. This is NOT a scam – this is our real lives.”

The Secret To An Accelerated Conscious Awakening