The video below is a clip of Project Camelot’s Kerry Cassidy interviewing Dr. Norman Bergrun about what’s really going on in space.

A mechanical engineer, Dr. Bergrun has worked for Ames Research Laboratory, NACA (National Advisory Committee for Aeronautics), and Lockheed Missiles and Space Company, now known as Lockheed Martin. He then went on to found Bergrun Engineering and Research.

You can view some of his publications for NASA, where he worked for more than a decade, here.

Coming from such a distinguished background, we can make several basic assumptions about him, not least of which is that he is highly intelligent. 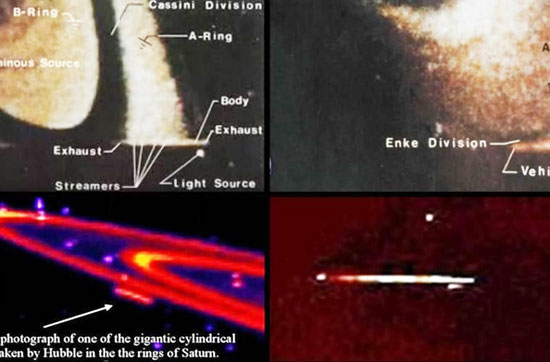 We can also assume that he knows and has worked with other intelligent and powerful people, and that he has had access to extremely sensitive data, which he himself makes clear in the below interview and in his book, The Ringmakers of Saturn.

What makes Norman’s story so intriguing is not only his impressive background, but the fact that hundreds of other scientists, politicians, and high-ranking military personnel have also shared information like this. He is just one of many insiders exposing the reality of Unidentified Flying Objects (UFOs) and extraterrestrial beings.

When former NASA astronaut and Princeton Physics Professor Dr. Brian O’Leary said that there is “abundant evidence that we are being contacted, that civilizations have been visiting us for a very long time,” he wasn’t joking.

There are now officially declassified documents that verify a long history of military encounters with these objects which are performing maneuvers that no known aircraft can perform, all while traveling at speeds no known aircraft can travel. Not only that, but at the same time that pilots visually confirm their sightings, these objects are being tracked on both air and ground radar.

Dr. Jacques Vallee, notable for co-developing the first computerized mapping of Mars for NASA, and for his work at SRI International on the network information center for ARPANET, a precursor to the modern Internet, published a paper in the Journal of Scientific Exploration titled “Estimates of Optical Power Output in Six Cases Of Unexplained Aerial Objects With Defined Luminosity Characteristics.”

Here you can see some pictures taken by military pilots of the objects they encountered.

When entering into the vicinity of these objects, it’s not uncommon for critical electrical equipment to go ‘dead.’ UFOs have also been seen hovering around global nuclear missile facilities, at which time these facilities completely shut down and the nukes within go offline. You can learn more about that here.

According to Herman Oberth, one of the founding fathers of rocketry and astronautics, “flying saucers are real and… they are space ships from another solar system. I think that they possibly are manned by intelligent observers who are members of a race that may have been investigating our Earth for centuries.” Oberth, Hermann: Flying Saucers Come from a Distant World, The American Weekly, October 24, 1954.

There are literally hundreds of shocking quotes from people of such reputable backgrounds, and thousands of documents pertaining to the UFO phenomenon, which lends even more credibility to the video below.

“What I found out is, these things inhabit Saturn, that’s where I first discovered them, and they’re proliferating.” By the way, the ships Norman Speaks of around the rings of Saturn, they’re humungous.

His book, mentioned above, is currently selling for approximately $2000 dollars on Amazon. It has government pictures from the voyagers and other high-tech machines of the Spaceships that have been seen over Saturn’s rings.

Again, what makes this testimony so interesting is the fact that he is one of many high ranking whistleblowers in the field.

You can read more on the subject by following this link: The Ringmakers of Saturn: Respected Ex-NASA Scientist Says Giant Spheres Are Creating the Rings.

You can access the full interview, which is more than an hour long, here.

At the end of 2017, the United States government officially admitted to the existence of UFOs with the release of previously classified footage of two navy pilots scrambling to intercept one (a UFO), with more footage on the way.

Luis Elizondo, a former high ranking military intelligence officer who was in-charge of the Pentagon’s recently disclosed UFO program, made an appearance on mainstream national news to discuss the topic.

The video released showed an object travelling at a high rate of speed, and performing maneuvers that should be impossible based on our known laws of aerodynamics. The Pentagon released two videos of separate objects, and both of them were displaying maneuvers that no known man-made air-craft can perform.

In one of the videos, a smaller object was seen coming out of another, making three objects. When the pilots began approaching the object at a close range, both of them accelerated instantaneously (from an already high speed), and disappeared within seconds.

Louis made it a point to emphasize that this is something that’s been happening for a long time, and something that happens a lot. This has been made clear by hundreds of other high ranking personnel from within the military, several other fields, and the release of millions of pages of UFO documents from dozens of governments.

These documents are full of radar returns, visual confirmations and electrooptical data. The next question to ask is, who is the intelligence behind the wheel? This is discussed further in the article It’s Official – We Now Know That UFOs or UAP are Real – So Are They Extraterrestrial or Not?

When asked if he believed these objects are extraterrestrial, he stated that there is “compelling” evidence to suggest that we “may not be alone, whatever that means.”
“I will tell you unequivocally that through the observations, scientific methodologies that were applied to look at this phenomena, that these aircraft are displaying characteristics that are not currently within the US inventory, nor in any foreign inventory that we are aware of.”

He also made another strong point in the interview:
“We have deliberately stayed away from going down the rabbit hole of, who’s behind the wheel and what are their intentions, because a lot of people have a lot of feelings towards that, and are very emotional about that.”

The pilot, as with hundreds of others who have had the same type of experience, stated his belief that these objects are not from our world.