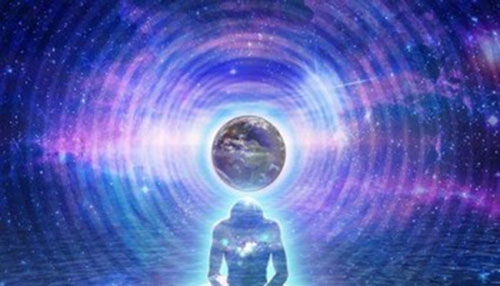 This presentation outlines a quantum consciousness model channelled by “Sasha”, who claims to be a female from the Pleiades, via Lyssa Royal (American author) at a contact workshop in Mt. Fuji, Japan, 2015.
This model is intended to provide a basic conceptual understanding for the higher purpose of applying its principles directly. The evolution of quantum consciousness is a journey, not merely a mental exercise. This model was offered to be utilized as a gateway for this purpose.

Topics addressed:
Founders: The primary One consciousness, the embodiment of wholeness via the paradox of oneness and separateness that is you. It is the universal pulse of creation.
Galactic Core: The Milky Way core, the conduit for the universal pulse of creation from which consciousness evolution unfolds.
Wave/Energy/Oneness: The singular electromagnetic light force of infinite creative potential pulsed through the Galactic Core as an all-pervasive sea of probability.
Particle/Matter/Separateness: The fulfilment of infinite creative potential, the means by which oneness can experience every potentiality of itself as relative to every other potentiality of itself. As wave/energy potential becomes “known” (by fragmented consciousness) it transforms into particalized matter (i.e. see Dual Slit Experiment).
Density: The energy mass per unit of fragmentation. Greater fragmentation = lower density.
Human Reality: Human awareness occupies 3rd Density (full physicality, 4 dimensions: 3 in space + 1 which is time) and is shifting to 4th and 5th Density (4 dimensions + “concurrence of space-time”).
E.T. Reality: 4th and 5th Density is the “hot spot” blending individuality and subtle linearity with collective consciousness and non-linearity (the concurrence of multiple space-time lines). Most E.T. consciousness occupies this energetic band.
Shared Reality: Humans can interact with E.T. consciousness in the overlap zone between 3rd and 4th Density as Humans learn to step-up and E.T.-s step-down their awareness.
Wave/Particle Duality: Every photon of energy is simultaneously a wave (infinite probability) and a particle (fulfilled probability). Particles always maintain their connection to infinite oneness.
Quantum Fluctuation: The harmonic oscillation between quantum wave/particle states. Per the Uncertainty Principle, the more one aspect of a photon is known (i.e.-momentum), making it more particle-like, the more another aspect is unknown (i.e.-position), making it more wave-like.
Zero-Point Energy Density: The infinite mass state of oneness within quantum fluctuation in which a state of “rest” is 100% known (i.e. momentum) and its reciprocal state is infinite/unknown (i.e. position). A vortex into this state occurs in the space-time between each quantum wave pulse. This is exploited for E.T. space travel and can also be accessed at the peak in-breath point of rest.
Quantum Entanglement: The ability for particles to transcend Space (Bell’s Theorem) and Time (Wheeler’s Delayed Choice Experiment) due to their innate property of wave oneness.
Physical Duality: 3rd Density manifestation of consciousness fragmentation and wave probability polarization, where all things are experienced in relative contrast to all other things.
Ego: The 3rd Density anchor for fragmented consciousness to maintain the immersive experience of duality through an illusory identity (mind) that keeps it polarized from all that is not identity.
Beliefs: Learned expectations (conditions) equated with ego identity from which each “now moment” (what is) is judged against, resulting gap = state of non-peace that motivates its closure.
Surrender: The unconditional allowance and acceptance of what is through the dissolution of beliefs, resulting in gap closure, full integration of duality, and evolution of consciousness.
Consciousness Evolution: Re-integration of fragmented consciousness as proportional to unconditional movement through (and integration of) each “now moment” (what is). In 3rd Density, as consciousness shifts to new probabilities matching integration capacity, it is experienced as linear Space-Time.
Explore your inner stars, it’s who you are. Live. Let Go. Love.