Six realms of existence according to Buddhist ideology (1)

According to the Buddhist ideology, SAMSARA is considered to be DUKKHA, unsatisfactory and painful, perpetuated by desire and AVIDYA (ignorance), and the resulting KARMA. Rebirths occur in six realms of existence: heavenly, demi-god, human, animal, ghosts, hellish. 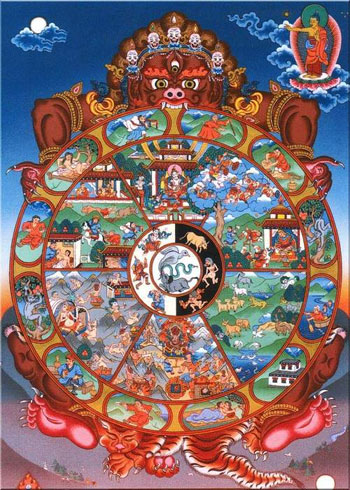 NARAKA-GATI: The Realm of Suffering

NARAKA is an old Sanskrit word meaning “hell”: this is the primary realm of existence according to Buddhists. This dominion differs from Christianity’s views of hell in two main aspects: firstly, beings are not sent here by the judgment of a divine creator; secondly, the length that a soul stays in NARAKA is not eternal, but generally last for thousands of years. 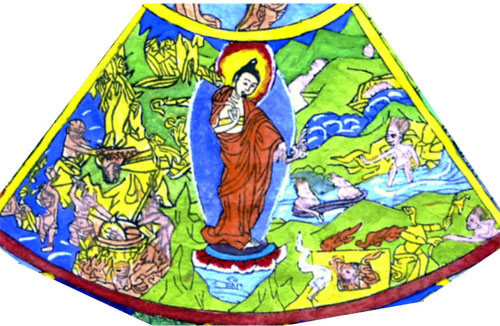 NARAKA consists of many levels based on the KARMA-ic disposition of the person. A person that has committed many evil deeds will be sentenced to a longer and painful hell then someone who has done less evil. The souls are purified by the cosmic waters of purgatory, which rages endlessly, saturated with the wicked souls. You receive exact repayment for whatever KARMA you create, and the retribution is never off by even a hair’s breadth. The beings in these realms often lose consciousness, due to death. Upon death the beings are reborn and sent through torture again; specific to the realm.

This NARAKA realm can be further divided into two classes including hot and cold NARAKA. 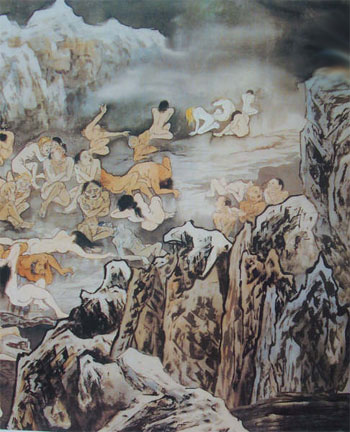 A dark, frozen plain surrounded by icy mountains and continually swept by blizzards. Inhabitants of this world arise fully grown and live life naked and alone. The icy wind continually hitting the naked bodies produces painful blisters. The length of time an entity spends in this NARAKA is said to be the time it would take to empty a barrel of sesame seeds, if one only took out a single seed every hundred years.

This realm is even colder than ARBUDA. Blisters are present in this realm as well, but are cut open by the intense wind and cold. The bodies scattered in this realm are covered in frozen pus and blood.

The victims are cold and are forever making “at-at-at” sounds with their mouths.

The souls in this realm lament and make “haa-haa” sounds in pain.

The being here are so cold that they chattering their teeth and make “hu-hu” sounds.

This realm is so cold that it turns the skin of the beings blue, the skin’s tone is similar to that of a blue lotus or water lily.

In this realm the skins of the beings erupt open, leaving the wound raw and bloody.

In this realm the bodies of the victims shatter like glass, exposing organs, which also shatter in the cold. 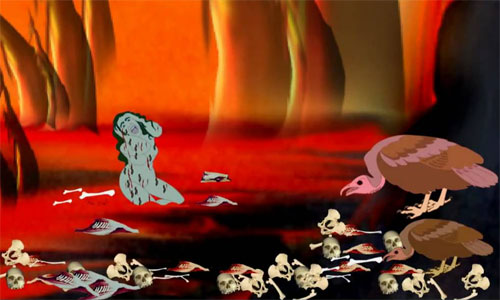 The exact measurements of this realm is supposedly 7000 (11,265 km) miles deep, and 70,000 (112,654 km) miles every direction. The entities in this realm are born fully mature and are already in a state of fear and misery. This realm is filled with hateful and violent people that attack each other with iron claws. In between the melee the hell guards appear, they attack the beings with fiery weapons. When the beings experience death through unconsciousness, they are suddenly reborn and tortured again. This realm also features other forms of torture, including: being sliced into pieces, having molten metal being dropped on them and suffering endlessly from the heated iron floor. An average lifetime in this NARAKA is 1.65 × 1012 years long.

This realm has the same tortures as the SANJIVA realm, but with additional methods of torture. Black lines are sewn on individuals, which the hell guards use as a guide to dissect the body with their fiery weapons and saws. The average lifetime in this NARAKA is 1.30 × 1013 years.

The area is surrounded by massive boulders which smash into each other, with the beings trapped within the calamity. The beings are crushed into a bloody jell, until the boulders move apart, they are then revived to full health. This process is endless and causes entities to lose consciousness very quickly. The average lifetime in this NARAKA is 1.04 × 1014 years.

In this realm the beings run about wildly, looking for refuge from fires. When the beings find a apparent shelter, they are locked inside and the building is set ablaze. The beings scream inside the building, as they as slowly burned away. The average lifetime in this NARAKA is 8.29 × 1014 years.

This NARAKA is similar to RAURAVA. This realm is inhabited by entities that have hurt others to maintain their own wellbeing. In this NARAKA, demonic animals such as KRAVYADA, torment them and eat their flesh. The average lifetime in this NARAKA is 6.64 × 1015 years.

The hell guards impale the individuals with fiery weapons, the fires from their weapons seep through the nostrils and mouths of the individuals. The average lifetime in this NARAKA is 5.32 × 1016 years.

The tortures here are similar to that of TAPANA. The beings are impaled more savagely with fiery weapons, exposing charred internal organs and flesh. It is said to last half a ANTARAKALPA. The average lifetime in this NARAKA is 4.25 × 1017 years.

The beings in this realm are roasted alive in a massive oven, suffer terribly for many years. The souls in this dimension face never ending afflictions for an entire ANTARAKALPA! The average lifetime in this NARAKA is 3.40 × 1018 years.

PRETA-GATI: The Realm of Hunger

The truly evil souls enter the NARAKA, while the not so wicked ones end up in PRETA-GATI. Ghosts are essentially masses of YIN energy, that lack form but have a shadow or vice-versa. The hungry ghosts in this realm are depicted as pitiable beings with huge, but empty stomachs and pinhole mouths. Their neck and mouth are so thin that it becomes impossible to satisfy their hunger. These entities are associated with addiction, obsession and compulsion. Greed and jealousy lead to birth of these beings. 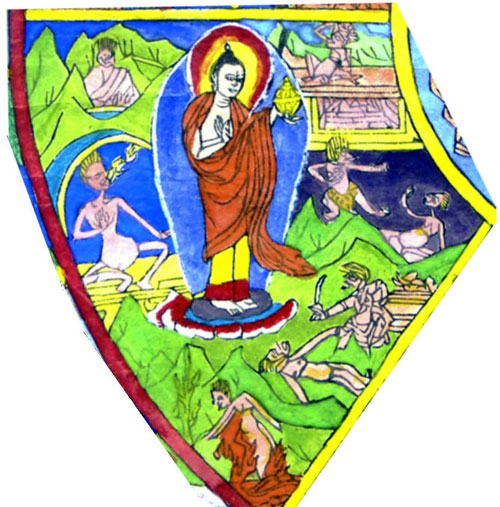 The ghosts in this realm delight in hate. They lack reasoning behind good and bad, so they treat every situation with uncontrolled rage, regardless if you’re good to them or bad to them. Lighting a stick of incense is said to call forth ghosts, according to the Buddhist ideology. People generally light incense to pay respects to ghosts. Often, before paying respects to them, they will not bother the Buddhists undergoing this procedure. Upon recognizing them, they will become a nuisance, make them sick and create trouble in their life. So one must be careful with lighting incense and paying respects to ghosts, because they can be difficult to get rid of, Buddhists warn. Confucius once said: “Respect the ghosts and spirits, but keep them at a distance”.

Ghost generally do not understand the law of cause and effect, or law of KARMA. Essentially, you reap what you sow. Ghost have no comprehension of this law, so they act recklessly and in confusion. Their ignorance grows greater every day, allowing them to gain a heavy density of negative KARMA. This is often an endless cycle for most poor souls, as they are stuck in a cycle of collecting massive amounts of negative KARMA.

The Hungry Ghost is more or less a metaphor of a person that is trying to fulfill their illusory physical desires. What they want, they can never have.

In Japanese Buddhism, there are two different types of PRETA: GAKI and JIKININKI. Souls in a GAKI are classified as beings that are jealous and greedy, the KARMA-ic punishment for this is to be cursed with an insatiable appetite for a particular substance or object. The JIKININKI are spirits belonging to greedy, selfish and impious individuals. The punishment for this spirit is to scavenge and eat newly dead bodies. The JIKININKI do not like their craving for dead human flesh, but nevertheless are forced to consume it.

The Hungry Ghost Festival is popular amongst Chinese Buddhists. They try to satisfy the roaming spirits by offering food and drinks. According to one myth, the spirits are granted permission to return to world of the living, and take what they want, if they had not been given sufficient offerings by their relatives.

TIRAGYONI-GATI: The Realm of Brutality

Animals are thought to exist in a different realm than humans, they exist within the same space, but live in a different state of mind. This mental space that they live in is called TIRAGYONI-GATI. 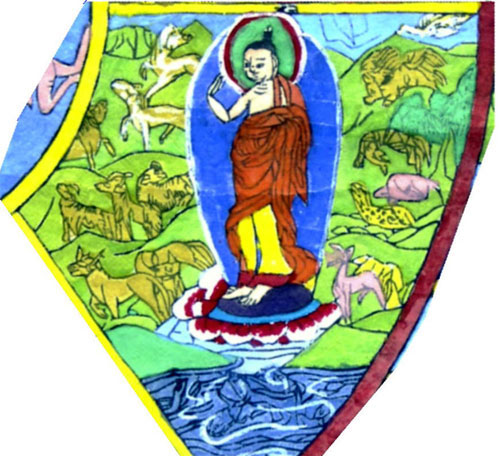 Animal beings are characterized for their stupidity, prejudice and complacency, according to the Buddhists. They live fragile lives, at the whim of nature and man. As animals, they avoid discomfit and the unfamiliar. Beings that are ignorant and carefree generally end up in this denomination, they display lack of critical thinking and base knowledge to ascend further. The transition between humans, ASURA and animals is very likely upon death.

Souls become reincarnated into animals due to greed. Animals eagerly try their best to accumulate as much possible of everything, good and bad; to them, more is better, the Buddhists say. They will never get tried of their greed, which is their ultimate downfall. It often takes animals (and lower level reincarnations) eons to rebirth into a human.

Rebirth in this realm is considered unfavourable because of the amount of suffering that is present. They are attacked and eaten by other animals, constantly living in fear of other entities. They endure extreme and volatile changes in the environment on an on-going basis. Those that live amongst humans are often slaughtered for food, or forcibly taken and worked with many beatings. When their bodies are worn out from the slave labour, they are slaughtered to end their miserable lives. They lack the critical thinking necessary to build a shelter and provide security, hence they are trapped in an endless circle of fear and brutality.

‘It Belongs to the People, Not the Bankers’: Italy Moves to Seize Gold from Central Bank