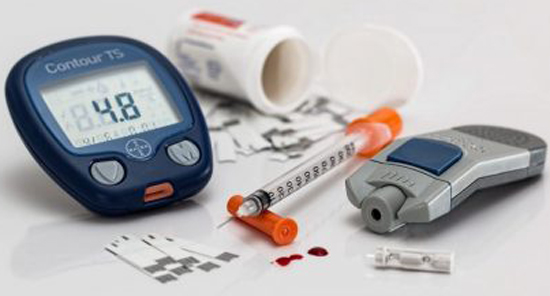 Autoimmunity against glutamate decarboxylase (GAD) has been associated with type 1 diabetes. GAD65 (65kDa) and GAD67 (67kDa, to a lesser extent) are involved in type 1 diabetes.
Following an anecdotal report of type 1 diabetes diagnosis a few weeks after measles, mumps and rubella (MMR) vaccine administration, MMR vaccine contents were examined. Major proteins in the vaccine apart from the measles, mumps and rubella live viruses were chicken embryo cell culture proteins.
GAD65 and GAD67 are expressed during chicken embryogenesis.

The results above provide strong evidence that chicken embryo cell culture proteins in the MMR vaccine can cause the development of antibodies against chicken GAD65 which cross-react with human GAD65 protein to cause type 1 diabetes.
This is very similar to the Pandemrix vaccine causing narcolepsy.

Vaccine design and safety processes have fundamental problems that need to be immediately addressed to avoid such devastating consequences.
Read the full study here.
Vaccines are contaminated with GAD65 (glutamic acid decarboxylase 65 KDa) and AQP4 (aquaporin-4) protein containing chick embryo cell cultures. The role of such contamination in the etiology of type 1 diabetes (T1D) and neuromyelitis optica spectrum disorders (NMOSD), was previously described.

Origin of autoreactive T cells Thymocytes with T cell receptors (TCR) that have high affinity for self peptides are usually negatively selected and destroyed in the thymus. T cells with TCR that recognize peptides that differ by as little as one amino acid from a self peptide, can be positively selected and migrate to the periphery. These low affinity self reactive (LASR) T cells can become autoreactive when they are activated by a peptide that exactly matches a self peptide except for this one amino acid difference (cognate peptide). LASR T cells have the highest possible affinity to self peptides that still qualifies for positive selection in the thymus. This arrangement seems to have worked very well over millions of years of evolution, until human ingenuity intervened…

Immunotoxic effects of injected proteins have been known for over a hundred years. But ignorant vaccine regulators have placed no controls on the proteins that contaminate vaccines. The outcome was predictable. The Pandemrix vaccine was contaminated with influenza virus nucleoproteins which resulted in narcolepsy. Rabbit and duck embryo neural tissue contaminated rabies vaccines cause “neuroparalytic accidents”. Bovine casein and casamino acids used in vaccines are derived from cow’s milk. Therefore cow’s milk proteins contaminate numerous vaccines, contributing to various disorders.

During evolution, animal protein injection into humans was a rare event. Therefore our immune systems did not have an opportunity to evolve a defense for this mode of abuse.

T1D epitope alignment to regions of near identity

Examining the GAD65115–127 and GAD65 274–286 epitopes associated with type 1 diabetes, it is clear that the epitopes are from locations where the chick GAD65 residues differ slightly from the human GAD65 protein (highlighted in figure below). This is exactly what we would expect in LASR T cell mediated autoimmunity. Such chick GAD65 epitopes can activate LASR T cells. Such activated LASR T cells can cross react with human GAD65 and destroy beta cells. Such autoreactive T cells are functional even with low affinity or very low affinity binding. Peptides from locations where the homology between chick and human proteins is 100% are less likely to activate T cells because such T cells are likely to have been negatively selected in the thymus.
Uniprot and BLASTP are used to perform protein sequence alignment analysis.

Hedman et al. write: “No significant differences were seen in any of the Th1-associated receptors, and only the percentages of CD8+ cells expressing the Th2-associated receptor CCR4 was higher in the diabetic group in comparison with healthy individuals, but not observed on CD4+ cells.”

As Berin et al. describe, the CCR4 receptor indicates skin homing and the site of initial priming. Skin homing would be expected since the animal antigen containing vaccines were administered via the subcutaneous or intramuscular route. Such CD8 T cells expressing CCR4 are involved in the destruction of beta cells.

Vaccines disable at least one layer of natural protection against autoimmunity

T cells with high affinity to self peptides being negatively selected in the thymus is one major layer of natural defense against autoimmunity.
T cells in the periphery need to be activated with a self peptide. This is another major layer of natural defense against autoimmunity.
Vaccines are contaminated with numerous animal proteins. Animal proteins contain numerous peptides identical to self peptides. Upon administration of such vaccines, with innate immune system-derived costimulation active, these animal protein derived peptides activate T cells that have escaped thymic negative selection. So this layer of defense is disabled.

While vaccines target one or a few particular viral, bacterial proteins, most vaccines are contaminated with all proteins from that virus or bacteria. Example: the Pandemrix vaccine contained both H1N1 hemagglutinin (target) and H1N1 nucleoproteins (contaminant). The exceptions are recombinant vaccines. In recombinant vaccines, the vaccine contains only the target protein from the target organism. The target protein is produced usually by genetically modifying yeast (Saccharomyces cerevisiae). Hepatitis B and HPV vaccines are produced using this technique. Such vaccines are however, contaminated with all Saccharomyces cerevisiae proteins. 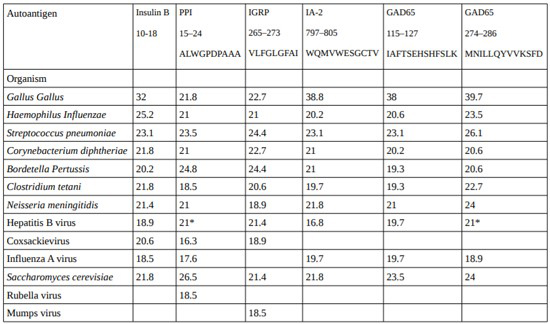 As we can see above, there are numerous scores above the 19.3 baseline that corresponds to the level of sequence alignment in Pandemrix vaccine induced narcolepsy. So these contaminants can contribute to autoimmune diseases.

It is quite obvious that there are fundamental problems with vaccine design and safety. Vaccine designers need to go back to the drawing board. We need vaccines that are safe by design.