WikiLeaks’ Julian Assange tweeted out a graphic by Swiss Propaganda Research (SPR), a research and information project on geopolitical propaganda in Swiss media, which reportedly illustrates heavy influence exercised by the Council on Foreign relations over the U.S. mainstream media narrative delivered to the American public. 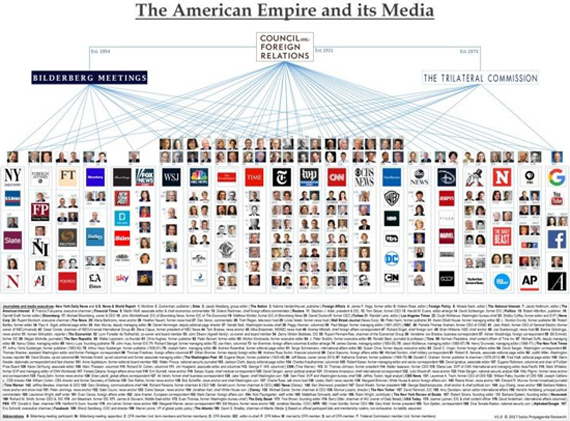 According to the report by Swiss Propaganda Research:

“Largely unbeknownst to the general public, many media executives and top journalists of almost all major US news outlets have long been members of the influential Council on Foreign Relations (CFR).
Established in 1921 as a private, bipartisan organization to ‘awaken America to its worldwide responsibilities’, the CFR and its close to 5000 elite members have for decades shaped U.S. foreign policy and public discourse about it. As one Council member famously explained, the goal has indeed been to establish a global Empire, albeit a ‘benevolent’ one.”

The council member referenced is Robert Kagan, co-founder of the Project for a New American Century (PNAC), and husband of another CFR member, Victoria Nuland, the former Assistant Secretary of State for European and Eurasian Affairs at the United States Department of State during President Obama’s second term.

A report from ABC News gives insight into the power exercised by PNAC and its CFR cohorts:

“The group, the Project for the New American Century, or PNAC, was founded in 1997. Among its supporters were three Republican former officials who were sitting out the Democratic presidency of Bill Clinton: Donald Rumsfeld, Dick Cheney and Paul Wolfowitz.

In open letters to Clinton and GOP congressional leaders the next year, the group called for ‘the removal of Saddam Hussein’s regime from power’ and a shift toward a more assertive U.S. policy in the Middle East, including the use of force if necessary to unseat Saddam.

And in a report just before the 2000 election that would bring Bush to power, the group predicted that the shift would come about slowly, unless there were ‘some catastrophic and catalyzing event, like a new Pearl Harbor’.

That event came on Sept. 11, 2001. By that time, Cheney was vice president, Rumsfeld was secretary of defense, and Wolfowitz his deputy at the Pentagon.
The next morning – before it was even clear who was behind the attacks – Rumsfeld insisted at a Cabinet meeting that Saddam’s Iraq should be ‘a principal target of the first round of terrorism’, according to Bob Woodward’s book Bush At War.”

Nuland was the lead point person overseeing the State Department’s activities during the coup that ousted Ukrainian president Viktor Yanukovych. In fact, a leaked phone call allegedly between Nuland and US Ambassador to Ukraine Geoffrey Pyatt indicated the U.S. selecting acceptable Ukrainians to sit in positions of power in a future Ukrainian government.

The illustration at the beginning of this article is based on official membership rosters compiled by SPR, and alleges the interrelation of CFR’s extensive media network and its main international affiliate groups – the Bilderberg Group (covering mainly the U.S. and Europe) and the Trilateral Commission (covering North America, Europe and East Asia).

A former senior editor at the Washington Post, Richard Harwood, in a column entitled Ruling Class Journalists, approvingly described the Council as “the nearest thing we have to a ruling establishment in the United States”.
Harwood wrote: “The membership of these journalists in the Council, however they may think of themselves, is an acknowledgment of their active and important role in public affairs and of their ascension into the American ruling class. They do not merely analyze and interpret foreign policy for the United States; they help make it. They are part of that establishment whether they like it or not, sharing most of its values and world views.”

Another Study Warns About Catastrophic Consequences of Implementing Geoengineering