The Media Is Now The Political Opposition 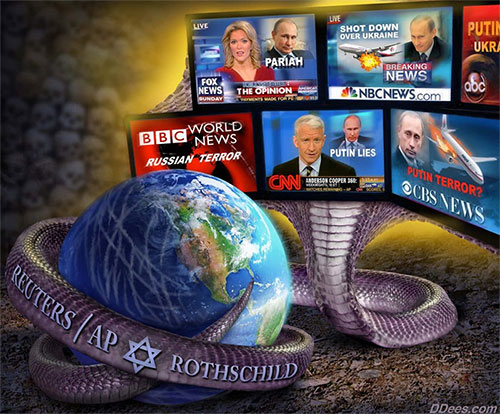 Stephen K. Bannon, former Executive Chairman to Breitbart News, was correct when he said that the US media – indeed, the entire Western print and TV media – is nothing but a propaganda machine for the ruling elite.
The “presstitutes” are devoid of integrity, moral conscience, and respect for truth. Read the comments spread all over the media where they define freedom of the press as the freedom to lie to the public.

Who else but the despicable Western media justified the enormous war crimes committed against millions of peoples by the Clinton, Bush, and Obama regimes in nine countries – Afghanistan, Iraq, Libya, Pakistan, Yemen, Syria, Somalia, Palestine, and even Ukraine?

Who else but the despicable Western media justified the domestic police states that have been erected in the Western world in the name of the “war on terror”?
Along with the war criminals that comprised the Clinton, Bush, and Obama regimes, the Western media should be tried for their complicity in the massive crimes against humanity.

The Western media’s effort to sustain the high level of tension between the West and Russia is a danger to all mankind, a direct threat to life on earth.

Yet, presstitutes declare that if Trump lifts the sanctions against Russia it proves that Trump is a Russian agent. It is paradoxical that the Democrats and the liberal-progressive-left are mobilizing the anti-war movement to oppose Trump’s anti-war policy!

By refusing to acknowledge and to apologize for its lies, for its fake news, the Western media has failed humanity in a number of other ways.
For example, by consciously telling lies, the media has legitimized the suborning of perjury and false testimony used to convict innocent defendants (such as Walter McMillian in Bryan Stevenson’s Just Mercy) in America’s “justice” system, which has about the same relation to justice as genocide has to mercy. If the media can lie about world events, police and prosecutors can lie about crimes.

By taking the role of the political opposition to Trump, the media has discredited itself as an honest critic on topics where Trump needs criticism, such as the environment and his tolerance of oppressive methods used by police.

Trump needs to understand that “the Muslim threat” is a hoax created by the neoconservatives and the military/security complex with the complicity of the presstitutes to serve the hegemony agenda and the budget and power of the CIA, Pentagon, and military industries.
If the US stops bombing and slaughtering Muslims, as well as training and equipping forces to overthrow non-compliant Muslim governments such as Syria, Iraq, and Libya, “the Muslim threat” will disappear.

Maybe Trump will add to his agenda breaking into hundreds of pieces the six mega-media companies that own 90% of the US media and selling the pieces to separate independent owners who have no connection to the ruling elites.
Then America would again have a media that can constrain the government with truth, rather than use lies to act for, or against the government.