The [quantum] mechanics of tantric lovemaking 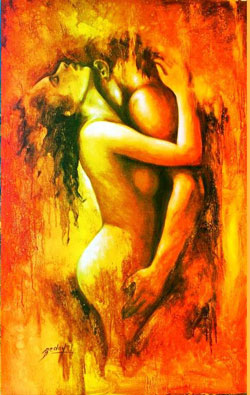 While we’re all familiar with sex in general, if you happen to use the phrase “Tantric lovemaking” in front of people, you will most likely get some raised eyebrows followed perhaps by a few under-the-breath questions about what it is exactly.

While many monogamous couples might typically say that the importance for a healthy amorous life in their relationship is vital to maintain a tight intimate bond and to continue to get closer to one another, it seems in this day and age (especially in the Western World) that the main goal for lovemaking is of course simply to have an orgasm. That’s the end goal, traditionally… “Wham-Bam, thank you ma’am!”

And while we might say lovemaking is so important in our relationship to maintain intimacy, many couples are in the dark regarding true and tried techniques for the bedroom, which can be used to do just that. It involves getting out of your own head and surrendering to the energetic flow of sexual energy accumulating in the moment, and consciously building on that energy to prolong the experience to heightened levels.

Tantric lovemaking is pretty much the opposite of what we’d consider “traditional amorous encounters” in that it doesn’t add shame, guilt, fear, and self-denial to the mix. Thanks to heavy influences from various religious orders, we’ve all learned to not only see our bodies as shameful, but also that anything sexual without the intention of procreation is considered “sacrilege”. Because of this, many people grow up so uncomfortable expressing their likes and dislikes in the bedroom and can put heavy expectations on their partners only to end up feeling unwanted or disconnected when their wants and needs go unmet.

With Tantra, trust and communication is the key, although you don’t need to have been with a person for years to engage in tantric lovemaking. You just need to come together with a mutual understanding of what will be taking place and have true dedication from both parties to commit fully to the process of bringing together, moving, building and holding the Yin-Yang energy of the male/female polarity.

In Quantum Mechanics, when a wave travels faster than the speed of light it literally burst into creation by means of becoming matter (a particle) in our third-dimensional reality. And it will continue forever as long as no interference is incurred from any other waves or particles already in existence. This sounds like the moment of orgasm. And that is sort of the goal here with Tantric lovemaking… keep going until you experience as many orgasms as you want. Only with Tantra, you decide how far away the orgasm is, rather than with casual sex, where the orgasm always comes pretty quickly, as long as you are “travelling” fast enough.

While casual amorous encounters can have you just mindlessly rushing to that finish line, Tantra asks you to slow down and be in the moment; be fully present. When two people practice together, they are consciously creating a space that allows for deeply intense, prolonged and multiple orgasms. Consider it nature’s reward for focus, dedication and commitment as it’s perhaps the most intimate form of meditation.

It gives two people the opportunity to not only explore their own bodies and get to know their own likes at a much deeper level; it opens them up to a new way of being vulnerable. And while that can be ultimately terrifying at first, facing your fears, as we know, is the only way to take away their power. And in Tantra, you are literally channeling this and all other emotional energy into a sacred space of heightened amorous pleasure. It is beyond empowering and if you’ve never tried it, or even heard of Tantra before, at least give a look into it. It will change your life in the most sacred, sensual ways.

After pushing LGBT agenda for children, Disney files patent on cuddly robots that could be used as «sex toys» for children