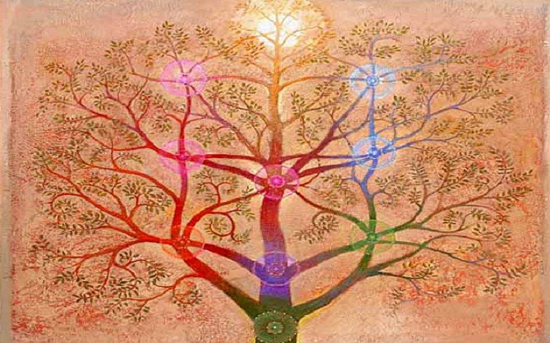 To find the secret meaning of the Tree of Life and the Tree of the Knowledge of Good and Evil, you need to first study how certain parts of a tree function. Furthermore, you need to investigate how certain features of the brain and spine relate to a tree. The tree is an important symbol in many spiritual and religious teachings because it represents the connection between the spiritual realm and material world.

Besides studying the tree, brain and spine, you have to overcome your fear of the occult so you have enough courage to tumble down the rabbit hole to explore the world of occult knowledge. To find one of the secret meanings of the Tree of the Knowledge of Good and Evil, you need to use occult knowledge and the art of word magic to decipher the parables and riddles in the Book of Genesis.

Many people like to associate the word occult with evil. This is a big misconception that prevents people from learning important spiritual knowledge. The word occult comes from the Latin word occultus, meaning “hidden, concealed, secret”. Therefore, occult knowledge means “hidden knowledge” or “secret knowledge”. Occult knowledge is like a tool and therefore can be used for good or evil purposes. For example, a knife can be used to save or end a man’s life. Like a knife, occult knowledge can be used to heal or harm mankind. That being said, there are certain occult teachings that can cause you harm when you apply them into your life. Those occult teachings often involve magic spells that require you to summon self-serving spirits.

Today, many religious people like to verbally attack researchers of the occult but what they do not “innerstand” (acquire a deep inner understanding) is that the Bible, the Quran or the Tipitaka (Buddhist scriptures) contain more occult knowledge than most books that are available to the public. By the end of this article, you will know why the key to deciphering the parables and riddles of the Bible is occult knowledge.

The Seed of Infinite Potential

Throughout the history of man, the tree has always been a symbol of worship. One of the reasons for this is because the tree is a great expression of the one and the many. As the one, the tree starts as a seed with infinite potential. This seed has the potential of the ATMAN, a word that comes from the Sanskrit word atma, meaning “essence, breath, soul”. In Hinduism, the word ATMAN means “the principle of life” or “the individual self, known after enlightenment to be identical with Brahman” or “the World Soul, from which all individual souls derive, and to which they return as the supreme goal of existence”.

As the one/seed grows, it eventually transforms into a trunk and then sprouts branches and leaves, becoming more increasingly complex. By observing and studying how a tree grows, you can see how it beautifully and miraculously expresses the principle of unity and multiplicity. This principle of unity and multiplicity can also be seen during the development of a fetus.

The creation of the fetus starts with the merging of two seeds (the sperm and egg). This merging process transforms the sperm and egg into a zygote which is considered one seed or one being. An interesting fact you need to know about the word one is that it is an anagram for the word neo, a word-forming element meaning “new, recent”. Another interesting information is that the word neo is the name of the main character of the movie The Matrix. In the movie, Neo eventually became known as the One. The zygote/one/neo is only a “seed” but within it contains all the information of the body of man (“male” and “female”).

As the zygote grows and divides itself, it eventually develops into the blastocyst and then the embryo. This is the stage when all the different parts of the body develop, such as the spine, heart, brain, lungs and central nervous system. An important structure of the body is the skull. This is the “dome” of the “temple” that houses an organ called the brain which is located between the temples of the head. This organ has two hemispheres called the left hemisphere and right hemisphere. 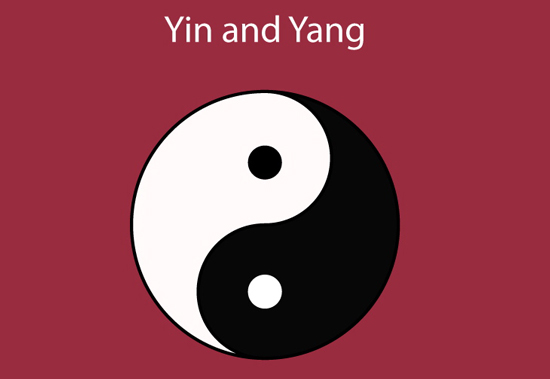 “And out of the ground made the Lord God to grow every tree that is pleasant to the sight, and good for food; the tree of life also in the midst of the garden, and the tree of knowledge of good and evil.” – Genesis 2:9

To find the secret meaning of the Tree of Life, you need to study the arbor vitae, which is an important part of the brain located near the brain stem. The arbor vitae is defined as “a treelike appearance in a vertical section of the cerebellum, due to the arrangement of the white and gray nerve tissues”. To see a picture of the arbor vitae, click on this link.

The connection between the arbor vitae of the brain and the Tree of Life is plainly obvious when you know that the Latin term arbor vitae literally means “tree of life”. Do you see now that the Tree of the Knowledge of Good and Evil and the Tree of Life represent certain parts of the brain and are not really trees? The Book of Genesis was not written to be read literally. How do we know this? Because we have never seen a serpent that talks in real life. Have you?

The fact that a serpent spoke to Eve in the Book of Genesis should tell you that this book contains myths. Why do you think the numbered subdivisions of a chapter in the Bible are called “verses”? The singular form of the word verses means “one of the lines of a poem” or “a stanza”. A line of a poem, also known as a verse, is not meant to be read literally. This is why the Book of Genesis does not make sense until its myths are deciphered. Dictionary.com defines the word myth using these exact words: “a traditional or legendary story, usually concerning some being or hero or event, with or without a determinable basis of fact or a natural explanation, especially one that is concerned with deities or demigods and explains some practice, rite, or phenomenon of nature.” This definition does a good job of briefly summarizing most of the stories of the Bible.

An important principle that you need to know about myths is that they are often written in parables and riddles. The reason for this is that to attain higher spiritual knowledge, you need to learn how to decipher words to find their deeper meaning. For example, the knowledge of God cannot be deeply understood through words alone because words cannot express the power of knowing. Because of this, the stories of the Bible were written in parables and riddles to motivate people to use their spiritual powers to help them decipher the words into information and assimilate the information into KNOWledge so they could experience it into wisdom, allowing them to know what the words meant on a spiritual level.

This is why in Matthew 13:34-35, Jesus said: “All these things spake Jesus unto the multitude in parables; and without a parable spake he not unto them that it might be fulfilled which was spoken by the prophet, saying: ‘I will open my mouth in parables; I will utter things which have been kept secret from the foundation of the world’.”

The Secret Meaning of the Serpent 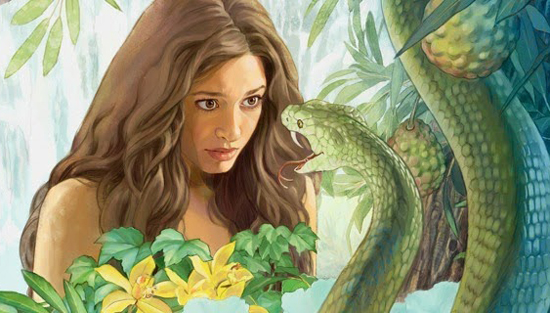 In certain occult teachings, the serpent is a symbol of life, procreation, wisdom, transformation, fertility and healing. The serpent also represents the cycle of life, death and rebirth. Based on knowledge and research, the serpent in the Book of Genesis represents the ego, the producer of thoughts related to curiosity, rebellion and disobedience. These characteristics of the ego are not necessarily “bad” things. For example, children are very curious, rebellious and disobedient but do we judge them as “bad” or “evil”? The serpent represents the ego mind that curiously wants to explore beyond the Garden of Eden.

When you look at the serpent and Adam and Eve from the perspective of the mind, the serpent is the ego and Adam is the conscious mind and Eve is the subconscious mind. This concept is related to the Holy Trinity which is defined as “the Father, the Son, and the Holy Spirit existing as one God”. The ego is etymologically defined as “the self; that which feels, acts, or thinks”. The word ego comes from the Latin word ego, meaning “I”. In other words, the ego is our individuality.

Adam and Eve: The Story of the Creation of Polarity

The name Adam is defined by EtymOnline.com using these exact words: “Biblical name of the first man, progenitor of the human race, from Hebrew adam – ‘man’, literally ‘(the one formed from the) ground’ (Hebrew adamah – ‘ground’)”. To find the occult (secret/hidden) meaning of Adam, you need to use the art of homophone to help you find a specific word that sounds similar to Adam. Phonetically, the name Adam sounds nearly identical to the word atom.

“And the Lord God caused a deep sleep to fall upon Adam, and he slept: and [H]e took one of his ribs, and closed up the flesh instead thereof;
And the rib, which the Lord God had taken from man, made He a woman, and brought her unto the man.” – Genesis 2:21-22

Here is an excerpt from the Amazon best seller book titled Word Magic: The Powers & Occult Definitions of Words that explores the story of Adam and Eve further:
“At the deepest level, the biblical story of Adam and Eve is nothing more than a story of the two creative forces of polarity and why those two forces are constantly fighting and making love with each other, similar to what people do in an intimate relationship. This process of fighting (expanding) and making love (contracting) allows the manifestation of negative and positive experiences. The knowledge and experience gained from those experiences teach the two creative forces of polarity to achieve a state of balance and harmony.

Once you innerstand the occult (hidden) meanings of the story of Adam and Eve, you will eventually know that it is a story of the two creative forces of polarity and their magical journey to achieve a state of balance and harmony. Hence, the story of Adam and Eve, the Sun and the Moon, the sperm and the egg, the conscious and the subconscious, the light (‘good’) and the darkness (‘evil’), the positive and the negative, the divine masculine and the divine feminine, etc.”

The people who wrote the Bible were geniuses and knew about atoms and DNA over two thousand years ago. Maybe scientists should start paying attention to the secret messages hidden in the Bible instead of making the ignorant claim that the Bible should not be taken seriously. The Bible is not really a record of literal history. It is a magical storybook that teaches people important lessons in life and the secrets of the Universe through the power of myth. Because of this, to access the secret knowledge of the Bible requires occult knowledge and the ability to decipher and assimilate mythical information into knowledge using the art of word magic.

Endgame: Disclosure and the Final Defeat of the Cabal (9)