The therapeutic qualities of oregano 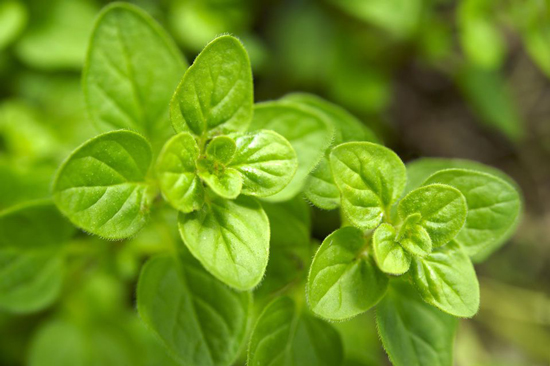 You may already know that oregano is the secret herb that takes tomato sauce to a new level of savoury and can even put flavour in butter sauces and zucchini or Brussels sprout with sour cream dishes that have people begging you for your recipes.

Oregano is an ancient, perennial herb, being an integral cooking ingredient in what is now known as Eurasia for thousands of years. The entire Mediterranean is well acquainted with this food-enhancing spice, but it’s probably no surprise that Greece and Italy are noted as the regions where it most likely originated.

Because it’s related to mint, which is from the menthe family of plants, you may detect a similarly cool but distinctive essence when you crush a leaf from the oregano plant between your fingers. Oregano has many of the same therapeutic qualities as mint, and the scent may also remind you of thyme.

Strolling through a garden that includes oregano, you may not be overwhelmed by the scent and aroma nearly as much as when the herb is dried. Greek oregano, or Origanum heracleoticum, is the variety recommended for your culinary endeavours.

As an herb, it makes sense that oregano provides health benefits. You might be surprised how many there are, though, and that the powerful properties extend throughout your whole body. Organic farm Floral Encounters offers a succinct account of the traditional uses for oregano: “The leaves and flowering stems have a strong antiseptic effect and a tincture of tea is used to treat colds, influenza, mild feverish illnesses, indigestion, stomach upsets and painful menstruation.

It is also a sedative and should not be taken in large doses although mild teas have a restful soothing effect and can help with sleep. A liniment using the herb is used to treat bronchitis, asthma, arthritis and muscular pain. The essential oil can be used to relieve toothache.”

But first, here’s some good information about how to include this easy-to-grow, must-have herb in your own garden. As always, organic seeds or seedlings from a reputable source are preferred to ensure they’re not tainted by harmful chemicals.

From Seeds or From Cuttings, Oregano Is Easy to Grow 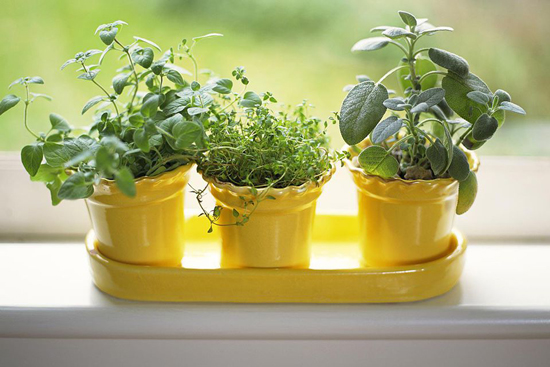 Cooks all over the world happily report how easy it is to cultivate this herb in their gardens, patio containers and inside on window sills. It’s bushy, low-growing and attractive, with tender, oval leaves and woody stems. Oregano loves sunshine and is easily grown from seed or propagated from cuttings placed in water in a sunny spot.

It’s the sun-lover aspect of oregano that makes it grow best when it’s warm. Many gardeners wait until the soil is 70 degrees F before planting the seed and do so in well-drained soil as opposed to clay that’s tightly packed.

Similar to basil, oregano plants grow denser when their branches are snipped or pinched back after they’ve reached about 4 inches in length. This also prevents a tendency toward undesirable “legginess” which could eventually threaten the health of the plant.

Additionally, it’s best to thin seedlings to about 8 inches apart, and trim occasionally so they don’t begin to flower, which can weaken the strong essence of the leaves. Heirloom Organics advises: “Trim plants back before flowering, (approximately [five] to [six] weeks after planting) to stimulate a dense growth habit. If you allow some of the flowers to produce and drop their seed, you can keep your oregano patch fresh and vigorous. Remove 3- to 4-year-old plants to keep the bed quality high.”

Every four years or so and in early spring, thin out oregano plants for optimal hardiness. They’re lovely for landscaping, especially with their tiny lavender blossoms. According to Farmer’s Almanac, water your oregano plants well, but maybe not as often as some other herbs.

To dry, cut the stems before the buds open and hang or lay them flat on wire racks. When the leaves are completely dry (as damp leaves will almost certainly mold) harvest them, place them in a tightly sealed glass jar and don’t forget to label them. Saved seed heads placed in a paper bag will keep for around five years.

Herbal Assets for Your Whole Body 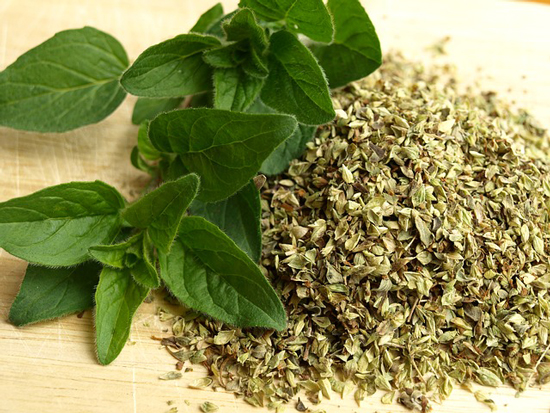 As an herb, oregano contains a number of interesting phytonutrients that help give this genre of plants such a well-deserved reputation for healing.

Strengthening your immune system is one area oregano targets due to its high rosmarinic acid and thymol content. Both of these compounds are powerful antioxidants, which studies have shown lower oxidative stress in your body caused by free radicals.

Organic Facts describes free radicals as “the destructive byproducts of cellular metabolism that can cause cancer and other chronic diseases.” One study tested the antioxidant activity of 39 commonly used herbs, and oregano had three to 20 times, higher antioxidant activity than the other herbs studied.

As for rosmarinic acid, a 2015 study showed it to help prevent aberrant crypt foci (which form before colorectal polyps) in rats, as well as to significantly reduce DNA damage.

You may not think of herbs in terms of having much fibre, but oregano does. Besides helping food to move through your system faster, decreasing the time it spends hanging around in your colon; fibre also helps increase the rate at which your system absorbs nutrients.

One of the most advantageous aspects of oregano is that it’s a natural source of omega-3 fatty acids, a type of fat that improves, rather than degrades, your heart health as an excess amount of omega-6 fatty acids can do.

Toxins in your food, water and the air you breathe can make you feel run down and even cause illness and disease, but compounds such as B vitamins in oregano tackle these, too, improving your metabolism as well as your energy levels.

Carvacrol, as well as thymol, gives oregano antibacterial benefits, particularly useful in your gut, as well as your skin and other areas. As a stimulating agent, it can speed up your metabolism, stimulate your white blood cells and help you recover from illness more rapidly. 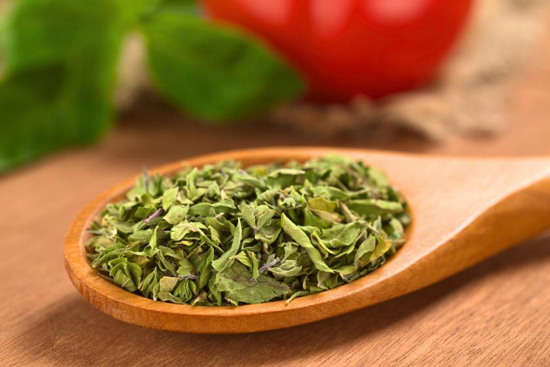 There are different schools of thought regarding whether or not you should use fresh or dried oregano for cooking. As is so often the case, it depends. The City Cook explains: “It’s not often that I’d choose a dried herb over fresh. The flavour difference between fresh and dried thyme is huge, with fresh thyme being softer and more complex; dried can be bitter.

But dried oregano adds a flavour that both compliments and complements, without dominating other ingredients. Dried oregano also adds that this-is-Italian flavour that we insist upon in our favourite Italian dishes.”

To help you experiment with this herb, here are a few things to note:

– Rubbing dried oregano between your fingers releases the most flavour into your dishes as you’re cooking, but you also want to add it toward the end of cooking.

– Red peppers, eggplant, tomatoes and green beans are good all by themselves, but they become delicious with a little oregano added!

– When seasoning your grass fed burgers (or even veggie burgers) the flavour you get from fresh oregano is brighter and more flavourful, according to thekitchn.com. Just mix 1 or 2 tablespoons into the mix with a pound or so of meat mixture, and you’ll love the result.

Of course, there are many vitamins, minerals and other nutrients in oregano that your body can make great use of on your journey of health.
These include vitamins A, C and E, providing vision and cell protection; vitamin K to help keep your blood at the right consistency; foliate to help form RNA and DNA building blocks and lots of iron, which helps prevent anaemia.

Additionally, it contains magnesium and calcium for bone metabolization; vitamin B6 for optimal brain function; potassium to maintain your heart rate and blood pressure; and manganese and copper, both important for your body’s optimal use of the enzyme superoxide dismutase.

Oregano oil is extremely versatile, as it’s used in everything from meat dishes to salads. As a medicinal, however, it should always be diluted, because it’s very potent.

Oregano oil has some fantastic capabilities for healing. One study showed it to be rich in antioxidant phytochemical flavonoids and phenolic acids, able to eradicate bacteria in biofilms (cells that stick together and can form bacteria-laden plaque) with higher efficiency than lab-concocted drugs. Other therapeutic uses for oregano oil include:

Another study noted that carnosol, another phytochemical in oregano, was “evaluated for anticancer property in prostate, breast, skin, leukemia, and colon cancers with promising results.” 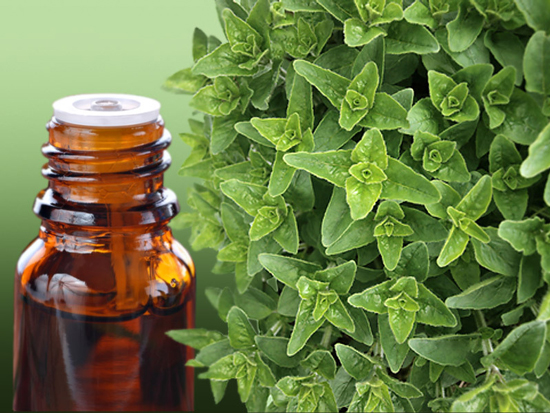 Today we are faced with a plethora of “unusual” emerging illnesses sometimes causing practitioners to scratch their heads, bewildered. For example, the illness now termed “winter vomiting disease”, has been seen globally. How about digestive disorders on the rise? Are bacteria or yeasts proliferating unchecked, creating havoc with our inner worlds? It’s very possible, though the precise cause not clear yet.

We are also dealing with new toxic consequences from engineered food (GM), as well as unknown bacteria in soils and water, intentionally modified viruses, etc. There is a new name for these vague new diseases, sometimes referred to as GMO-Ds, (genetically modified organism-disease) – no wonder we are getting odd new ailments!

Some practitioners are using the benefits of Wild Oregano Oil for relief from assaults. Wild Oregano Oil has been shown to destroy unwanted bacteria, fungus, yeast, parasites, and some viruses. It has also been shown to relieve symptoms of “winter vomiting disease”, another newly labelled disorder appearing to plague many. What? Vomiting?

The wild oregano plant is related to the mint family. When the flowers and leaves are harvested, the oil content is at its highest. Oil of Oregano, hence is an alternative that many holistic practitioners reach for to relieve symptoms. There are many kinds of oils, so take a good look to find wild Mediterranean oregano oil. Real wild Mediterranean oregano comes in two varieties: Thymus Capitatus, and Origanum Vulgare. These are the ones with the most health benefits, and considered among the most powerful.

Oil of Oregano contains Carvacrol – a potent antimicrobial. Carvacrol has been shown to be effective against Candida albicans, and the Aspergillosis mold, Staphylococcus, Campylobacter (thought to be responsible for some ulcers), Klebsiella, E.Coli, Giardia, Pseudomonas, Samonella, and Listeria.

Terpenes are yet another category of phytochemical within the oil of oregano, as well as Thymol, a natural fungicide with antiseptic properties. Thymol has also been shown to be an immune booster when properly administered. Oil of oregano also contains vitamin E complex, calcium, magnesium, zinc, iron, potassium, copper, boron, manganese, vitamins A, C, and Niacin.

Research has also suggested that Carvacrol also has possible liver regeneration properties by restoring blood flow to organs and tissues, protecting the liver in properly applied doses. Other potential benefits are: adding a couple of drops of the wild oregano oil to a diffuser, or steam inhalation, could give relief to congestion. Drinking a drop in filtered water might help with a sore throat… and the list continues.

Carvacrol is also a natural insect repellent… no wonder it tastes terrible. Always dilute, with a carrier oil, such as olive oil or water, with a ratio of one part to three parts of carrier. Undiluted can be irritating to the skin, mucous membranes, or organs. The therapeutic use of oregano oil should be short term only, and avoided by children or pregnant nursing women, high blood pressure or heart condition. It is strongly advised that before using any alternative treatment, to check with your preferred medical professional.

Aspartame – Putting the ‘Die’ In Diet in Over 6,000 Food Products