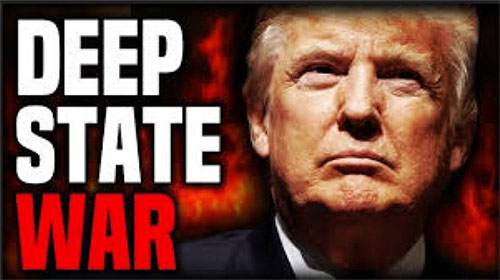 An interesting new report circulating in the Kremlin on March 4, 2018 prepared by the Federal Service for Military-Technical Cooperation (FSVTS) states that, within a few hours after being revealed that the American shadow government “Deep State” had established its own “shadow” National Security Council, President Donald Trump quickly retaliated against it. The US President signed, on March 1, a sweeping Executive Order making the most significant changes to the Uniform Code Of Military Justice (UCMJ) since the Military Justice Act Of 1983. The most significant change authorizes, for the first time in history, experienced civilians to take part in the US Military court-martial process – thus clearing a path for mass “Deep State” arrests, whose trials and sentencing would not impact the normal flow of the US Military justice system.

[Note: Some words and/or phrases in this article are English language approximations of Russian words/phrases from the Kremlin report, having no exact counterpart.]

According to this report, the National Security Council (NSC) is the principal forum used by the President of the United States for consideration of national security and foreign policy matters – but whose power was directly threatened in the beginning of March. Then it was revealed that the “Deep State” had created its own National Security Council that these coup plotters have named “National Security Action” – being led by Ben Rhodes, who was former Deputy National Security Advisor for President Obama. Rhodes’ contempt to a free press had been voiced by him, stating his disgust of the entire US media establishment: “Most of the outlets are reporting on world events from Washington. The average reporter we talk to is 27 years old, and their only reporting experience consists of being around political campaigns. That’s a sea change. They literally know nothing.”

With his brother, David Rhodes, being the President of CBS News, the Kremlin report continues, Ben Rhodes is protected by the “Deep State’s” mainstream propaganda media sycophants who are failing to tell the American people that these coup plotters are attempting to establish their own British-style “Shadow Cabinet” to usurp President Trump’s power.

Shadow cabinets are hardly an American tradition – they are British – but Rhodes, possibly in consultation with a guy like Marxist U.K. Labor Party leader Jeremy Corbyn, probably learned the use of them as a counter-cabinet in the event of a fall of the existing government, which happens a lot in parliamentary systems.

Federal Service for Military-Technical Cooperation analysts – who are military legal experts responsible for control and oversight in the field of military-technical cooperation between the Russian Federation and foreign countries – however, as written in the report, state that President Trump’s missing his December 23, 2017 deadline to sign The Military Justice Act of 2016 was by design, so as to enable him to gauge what the “Deep State” coup plotters were planning against him.

So once the “Deep State” began their creation of an actual “shadow government” by creating their own National Security Council, the Kremlin report continues, President Trump, on March 1, signed a sweeping Executive Order fully enacting The Military Justice Act Of 2016 – and that focuses entirely on massive changes to the Manual For Courts-Martial of the United States.

With the United States having been at war over 93% (224 out of 242 years) of its existence since its founding in 1776, the report notes, the masses of American people today (unlike their ancestors) have no idea that nearly every one of them falls under the criminal provisions of the Manual For Courts-Martial of the United States. That begins with their Selective Service laws allowing civilians to be taken from their homes and forced into uniform, whether willingly or not. The US Supreme Court has ruled that these civilians are subject to court-martial from the time they are supposed to report for induction, even if they never arrive.

Equally unknown to the masses of the American people, the report says, is that nearly every single citizen between 17-44 years-of-age likewise fall under the criminal provisions of the Manual For Courts-Martial of the United States as under US Code 10-311 they all constitute both the organized and unorganized militia – thus making them all, in essence, members of the US military whether they know it or not.

The Kremlin report further says it’s critical to note that making every single American citizen, regardless of age, subject to the criminal provisions of the Manual For Courts-Martial of the United States is a power invested in only President Trump who, in time of war, as the Commander-In-Chief, has the sole authority to determine what constitutes a threat and what should be done about it. The US Supreme Court has also ruled that “war” is defined by the aggregation of US military forces in foreign countries, not necessarily one declared by the US Congress – and whose standard is met by the US Military having nearly 800 military bases in more than 70 countries and territories around the world.

The report continues by saying that the just-signed sweeping Executive Order details in full how President Trump can wield his unlimited war powers against the “Deep State” coup plotters, the main emphasis being on authorizing the use of civilian employees experienced in the prosecution or defense of complex criminal cases to provide assistance to, and consult with less experienced judge advocates throughout the entire Manual For Courts-Martial of the United States process. Thus it will be allowed to the US Military services to outsource a core competency of the judge advocate communities – and whose only explanation for being needed would be the sudden and rapid rise of dissident American citizens entering into the courts-martial process in the thousands, if not tens-of-thousands.

President Abraham Lincoln was the last American war leader until now to arrest and put under US Military control for courts-martial tens-of-thousands of civilian dissidents. Thus, the report concludes, President Trump’s joking at a dinner on March 3 that China’s “president for life plan is a great idea that could happen in the US someday” – when viewed in the light of his sweeping Executive Order – should be understood as containing as much steel as it does mirth. Moreover, it is known that even if Trump signed this law now, it will be enforced on January 1, 2019 – which is the date that a new US Congress will be sworn in, and which might contain a majority of Trump’s “Deep State” coup plotting enemies sworn to throwing him out of office.