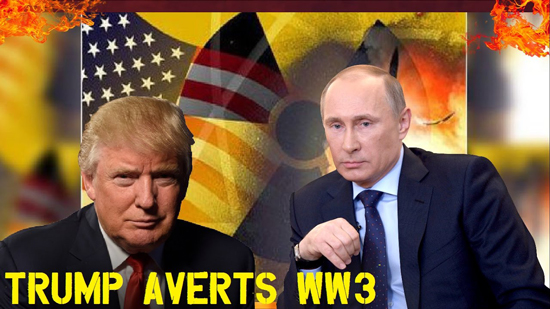 [Note: Some words and/or phrases in this article are English language approximations of Russian words/phrases having no exact counterpart.]

An angrily worded new Security Council report circulating in Kremlin on April 11 states that President Donald Trump had just issued his first overt war threat against the Russian Federation by his warning “Get ready Russia, missiles will be coming at Syria, nice and new and ‘smart’!”. Moscow quickly responded to it by asking Trump “Are ‘smart’ missiles an attempt to destroy alleged chemical attack evidence in Syria?”.

However, the precipitating event, left in total obliteration, was the destruction of a secret Algerian military flight carrying over 250 French-trained Islamic terrorists (all of whom were killed) destined for a CIA base in Jordon on the Syrian border. The West believes the flight was destroyed by Russian Spetsnaz forces. 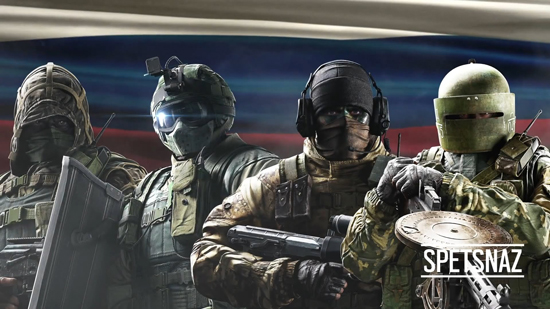 Though neither confirming nor denying that Russian special forces downed this plane, the Kremlin report notes that the Americans have been already warned: “If you want a confrontation, you’ll get one everywhere”.

According to the report, this past December (2017), Russian military and intelligence services became alarmed when French President Emmanuel Macron made an unannounced visit to his country’s former African colony nation of Algeria, where he sought to establish a “new relationship”. However, the true purpose was to create new training bases for the Islamic terrorists operating there – and the week previous to the April 7 alleged chemical attacks in Syria showed they were preparing to be moved to the Levant War Zone under the protection of the French guided missile warship Aquitaine. Russian air forces quickly targeted it with warning flights, but to no avail as France positioned itself with the United States to begin unprovoked air strikes on Syria. 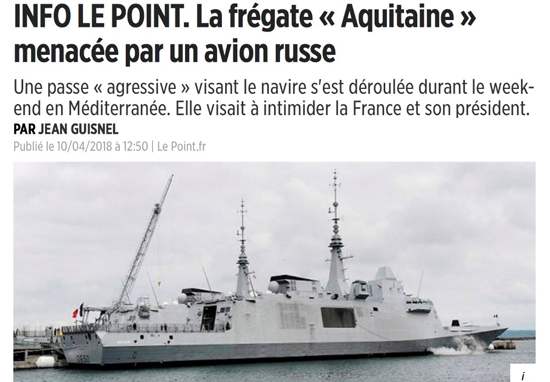 Turkish National Defense Minister Nurettin Canikli has just warned the West that “if an attack occurs against the forces in Syria backed by Russia or there is an attack by the US-supported forces, Russia won’t be able to stay away, otherwise it will lose its influence”, and further grimly stated that “just one spark may set the entire region on fire”, the report continues. The warmonger Americans are, nevertheless, foregoing all common sanity with their preparing to directly target Russian military sites in Syria, and President Trump has cancelled his planned trip to South America to oversee personally these maneuvers.

Speaking for President Putin, the Kremlin report further notes, Russia’s Ambassador to Lebanon, Alexander Zasypkin, has just spoken to all of the Arabic speaking peoples in the Levant War Zone warning of what is soon to come. He directly stated: “If there is a strike by the Americans, then… the missiles will be downed, and also the sources from which the missiles were fired”.

This caused Eurocontrol, an EU body responsible for handling air traffic over the continent, to issue a Rapid Alert Notification to flight operators in the Eastern Mediterranean, warning them to be ready for NATO rocket launches into Syria. The alert states (on April 10): “Due to the possible launch of air strikes into Syria with air-to-ground and/or cruise missiles within the next 72 hours, and the possibility of intermittent disruption of radio navigation equipment, due consideration needs to be taken when planning flight operations in the Eastern Mediterranean /Nicosia FIR area.” 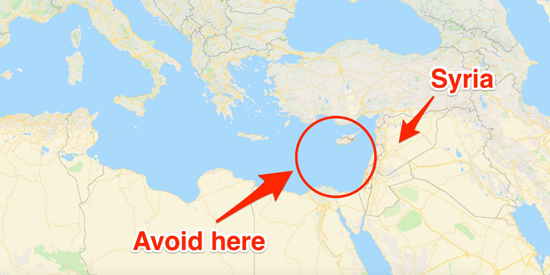 Not being told to the American people about how grave this crisis is, the report explains, is that there is no such thing as a “strike on Syria” as the Western propaganda mainstream media is proclaiming, but also any attack on this nation would be an attack on Russia itself.

Yevgeny Serebrennikov, First Deputy Chairman of the Russian upper house’s Defense Committee just reiterated to the Americans by his gravely warning: “As the Defense Ministry has already pointed out, the Russian military bases in Hmeymim and Tartus are under firm protection.
I think that the United States understands this and will not allow it, because otherwise, Russia’s response will be immediate, as the chief of the Russian General Staff has said.” 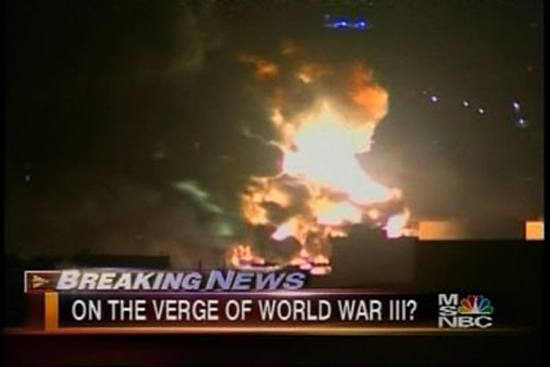 The Russian General Staff, in detailing what the Americans and their allies have in store should they attack Syria – the report explains –states the expected US attack plan would be to carry out destructive missile saturation without entering into the air defense engagement area, in order to be able to open corridors by punching a hole in the aerial defense. The Russian General Staff warned that any unidentified targets flying in the direction of Syria will be destroyed upon entering into the air defense engagement area.

Experience from wars of this kind, the Kremlin report says, shows that if during a massive air strike 20% of the enemy aviation is destroyed with the first hit, it will stop any further military activity, as neither the US nor its NATO allies have a kamikaze (suicide pilots) squadron within their aviation units. In case of such a war, US and its NATO allies will be operating against a Russian air defense system whose crews are unlikely to have time to determine in a “straight line” the exact flight paths of missiles and then to whom the warheads belong to. Despite the illusions of amateurs about the existence of “invisible” warplanes, they will be facing a disappointing reality as Russian air defenses can see everything. 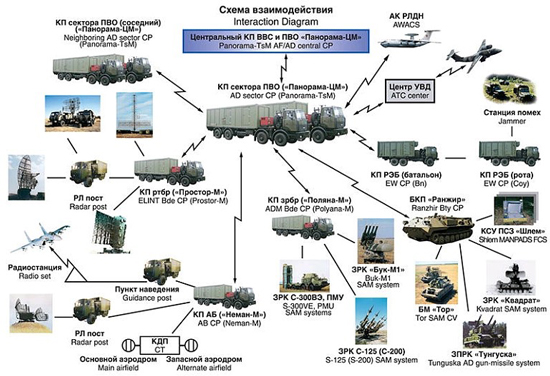 Lost in the West’s rush to start World War III, the Kremlin report continues, is that it’s supposed to be about an alleged chemical attack in Syria that no evidence exists for, no patients found, nor any bodies discovered and that the United States vetoed a United Nations resolution calling for it to be investigated. The refusal to investigate, also, now has been joined by former British Chancellor George Osborne. Moreover, he is urging Prime Minister Theresa May to begin to attack Syria without first seeking approval from the British Parliament. Ex-Chancellor Osborne says that British lawmakers “can ask questions later” as he is, of course, being supported by the British propaganda ministry BBC.

It’s worth mentioning that BBC recently ordered their Foreign News Producer Riam Dalati to delete his Tweet that said: “Sick and tired of activists and rebels using corpses of dead children to stage emotive scenes for Western consumption. Then they wonder why some serious journos are questioning part of the narrative”.

In fact, the Kremlin report notes, out of all the mainstream propaganda of journalists operating in the West, only one could be found supporting the truth. He is a widely popular and viewed American conservative political commentator for Fox News named Tucker Carlson. He was being savagely attacked by the American shadow government “Deep State” for questioning the accepted war narrative by correctly pointing out that no evidence exists for plunging his nation into war. Carlson further warned that a US bombing of Syria would lead to a Christian genocide there.

The Kremlin report concludes by noting the comments made by Chairwoman of the Council of Federation Matviyenko Valentina during Tuesday’s (April 10) meeting wherein she expressed her doubts that President Trump is even fully supportive of starting World War III. She stated that she believes Trump is dealing with the most blatant coup attempt ever seen against an American president. The depths of it can now be seen as the disgraced former FBI Director James Comey, who kept Hillary Clinton from being jailed for her crimes, was outrageously comparing Trump to a “mob boss”. At the same time, Trump has destroyed the vile and powerful “Deep State” operative Speaker of the House Paul Ryan, who recently announced his “retirement”. Valentina’s views are seeming to be supported by Trump himself as, nearly immediately after Ryan announced his “retirement”, the US President Tweeted out that Moscow needed Washington’s help in its economy and suggesting they work together and end what he called an “arms race”.