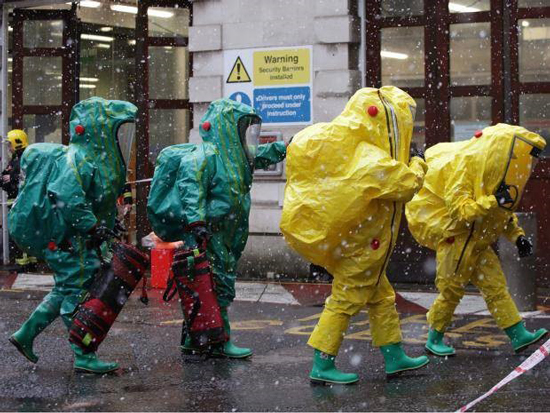 British police held a “terror drill” in preparation for a possible chemical attack on the Israeli Embassy located near Kensington Palace in London.
The December 2017 drill saw firefighters and paramedics rehearsing their response to hundreds of “casualties affected by a noxious substance”.

Members of law enforcement cordoned off a section of the embassy and decontamination tents were established at the back of the building.
Medical staff in bio suits treated “casualties”, who were put through decontamination showers. Members of the Royal Military Police played the role of “casualties”.

The police said the drill provided valuable learning both in terms of the nature of the deadly incident and the challenges brought by an Israeli embassy in London.
“This was the first time we have been able to carry out a live exercise inside a foreign embassy and the experience and learning gained from this will be invaluable”, said Commander Adrian Usher, who heads the Royal Military Police’s parliamentary and diplomatic protection command.
“It also tested our joint response in dealing with a hazardous substance, which is important as it will help officers and staff be better prepared should we ever face this type of challenge for real,” he added.

The exercise comes at a time when Israeli embassies are on high-alert, following US President Donald Trump’s decision of recognizing Jerusalem al-Quds as the capital of Israel and the announcement to relocate the US embassy in the occupied lands from Tel Aviv to Jerusalem al-Quds.

But the British police denied the drill was linked to the political developments.
“I must stress that the exercise, which has been planned over several months, was not designed with any specific threat in mind either in terms of the hazardous material element or the location”, Commander Usher said.