Understanding This Chart Can Flat Out Save America from Civil War 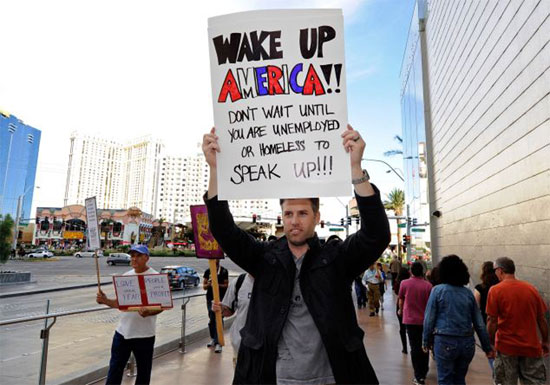 It can no longer be denied. America appears to be increasingly descending into civil unrest as the Liberal Left continues to be manipulated by the Leftist mainstream media and Left wing organizations funded by people like George Soros who has been funding revolutions around the world for decades through organizations like The Open Society. This time it’s America’s turn; and after the ruling elite’s candidate of choice was defeated in the US presidential election we’ve been seeing well organized protests and “revolutions” throughout America at times becoming violent and destructive to local properties.

What we’re seeing is the follow-up to Occupy Wall Street which (as it is now) was filled with well-meaning participants fighting for generic unspecified causes (e.g. “corruption”) without singling out specific guilty parties or specific crimes that can be leveraged against these specific criminals. Many believe this strategy of “generic” enemies and generic causes is very much intentional as it causes the chaos and unrest at the street level without actually singling out who the enemy is. Of course, in this case many of the brainwashed Hillary supporters singled out President Donald Trump as the enemy for being a “hater”, “racist” and “woman hater”. As most readers know, all of these accusations were based on a massive corporate mainstream media propaganda campaign waged against Trump as well as propaganda spread by Soros-funded groups like Moveon.org, puppet Hollywood celebrities and the politicians themselves like Hillary Clinton and others.

We are now seeing the progression of what many Americans have been recognizing as an engineered civil unrest designed to overthrow the government of the United States after Obama the sorcerer left the office.

So in the interest of explaining the current massive divide and civil unrest we are seeing in America, it’s worth studying a chart that fundamentally explains everything we are seeing. Also, the video below breaks everything down leaving no rock unturned and will allow truth seekers to easily predict future events as well as understand events as they happen in real-time. 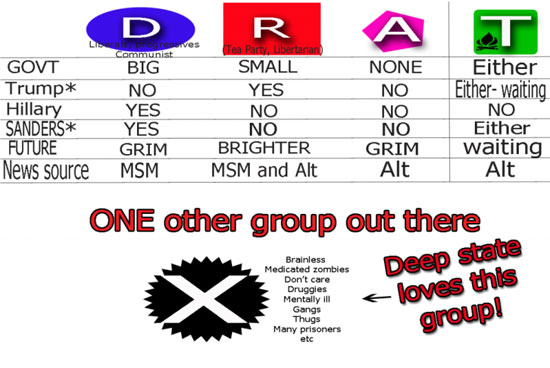 For the sake of clarity, the four columns represent four major political ideologies. Actually its three ideologies plus one more: T= truth seekers who are represented in green all the way on the right. The rest of the ideologies are the following:

D = Democrats, Liberals, Progressives, Communist and those that believe in big government, the collective ideology and global government.

R = Republicans, Conservatives, Tea Party, Libertarian and those that generally believe in small government, the strength of the nation state and conservative values.

A= Anarchists who are those who fundamentally do not believe in any form of government. This group is very important to understand in light of the big picture and current day events.

As you can see there is one other group at the bottom, group X, which represents everyone else who doesn’t care about truth, anarchism or political systems. Understanding this group is another key to understanding the engineered chaos of today. This group consists of druggies, gangsters, thugs, many prisoners, medicated zombies, partiers who don’t care about anything but themselves, and others.

How To Increase Metabolism Naturally