“But evil men and seducers shall wax worse and worse, deceiving, and being deceived.”– 2 Timothy 3:13 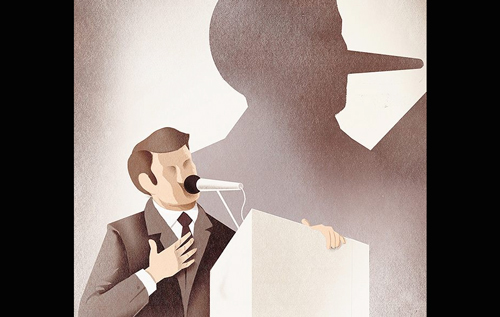 The book entitled People of the Lie written by Scott Peck, an American psychiatrist, it’s worth reading. It is a fascinating analytic study of malignant narcissism and deceit. One comes away from the book with an understanding that a very significant percentage, if not the majority of people in the world, are not decent.

Other conceptualizations presented by Peck in People of the Lie included disguise as a main motive of evil, along with descriptions of people assessed as such to being self-deluded, as projecting their own actions onto others, as utilizing the pretense of love to actually hate, and as possessing an inherent intolerance to withstand criticism. The author further identified evil as the opposition to life; even acknowledging the word “evil” as “live” spelled backwards. Dr. Peck also claimed evil could be measured by its consistency and conceded that decent individuals have difficulty in cognitively processing the concept:
“[Erich] Fromm saw the genesis of human evil as a developmental process; we are not created evil or forced to be evil, but we become evil slowly over time through a long series of choices. When confronted by evil, the wisest and most secure adult will usually experience confusion.” – Peck, Scott, People of the Lie: The Hope for Healing Human Evil, Century Hutchinson, 1983.

Peck also illustrated evil as more than the mere absence of good but, instead, as being overtly hateful and destructive. In other words, evil can manifest either by contingent circumstance or design. More often than not, however, it is the latter; evil happens on purpose. Furthermore, although the banality of evil is evident throughout history, it often materializes in the cult of personality; or, stated another way, institutionalized by way of The Collective.

The Canadian psychology professor, Jordan Peterson, is a modern intellectual warrior who daily combats the pervading cultural orthodoxies of political correctness. In a recent interview, he stated something similar to this: “If you live in the post-modernist world, there is no truth; just victory and power games”.

However, that is not a modern phenomenon at all. It has been accurate for evildoers, people of the lie, narcissists, and immoral reprobates, from the time mankind first sought political asylum east of Eden.
But what happens when the power of The Collective consolidates and usurps the authority of entire nation-states and monolithic multinational corporations? There is a modern linguistic formula that helps to understand. It looks like this:
EVIL x POWER x DECEIT = ORWELLIAN

The term Orwellian is derived from the writings of George Orwell (1903-1950), specifically Animal Farm, a satirical fable written in 1945 that described the events which preceded the Russian Revolution of 1917 where many in The Collective were deemed more equal than others; and 1984, a 1949 novel depicting a dystopian future where government monitored and controlled every aspect of human life.

The protagonist of Orwell’s latter novel is Winston Smith, a middle-class member in the Outer Party of INGSOC, a totalitarian regime led by the figurehead known only as “Big Brother”.
Winston worked in the Records Department of the “Ministry of Truth” where he revised history on behalf of the Party while under constant surveillance both at work and home. He acquired a diary and began to record what Big Brother and the INGSOC party (i.e. The Collective) condemned as “crimethink” and “thoughtcrime”. Smith was eventually mentally and physically broken by means of torture under the auspices of an evil government operative named O’Brien, whose duties were similar to those of a modern presidential special counsel investigator.

In many ways, the writings of George Orwell proved prophetic. For example, 1984 described three world super-states all engaged in eternal warfare that assured the continuance of their respective regimes. In 2018, however, there is another Orwellian Trinity that also coordinates in unison to control the collective minds of their subjects. The Orwellian Trinity today consist of the Political Left, the Military Industrial Complex, and the Corporate Media Messengers, all of whom conspire together to weaponize public consensus via the establishment of counterfeit premises which are, in turn, used to control contrived societal contingencies.

Feigning love and concern for the citizenry, the modern day manifestation of the INGSOC party, led by loyal Democrats, have sought to control private lives, consolidate power, and restrict personal freedoms by weaponizing healthcare, welfare, FISA Courts, illegal immigration, and anti-gun initiatives. Using Orwellian terms like “Hope and Change”, “Election Hacking”, “Black Lives Matter”, “No Justice No Peace”, “No Trump No Wall No USA at All”, “Hands Up Don’t Shoot”, “#MeToo”, “#OneLess”, and “No More Guns”, the Orwellian Trinity of the new Millennium marches in lockstep toward a predetermined future. By way of the Hegelian Dialectic they progress. First they create a problem; then they sow seeds of discord before finally demanding solutions designed to augment and centralize their political power.

For healthcare, The Orwellian Collective prevented insurance companies from selling across state lines. Then, when their control measures eliminated free markets causing premiums to rise and the entire system to falter, they sought to nationalize one-sixth of the American economy; or 16% of America’s gross domestic product.

Through Cloward-Piven inspired burgeoning domestic welfare programs, ever-increasing deficit spending, economic malfeasance, and wars abroad; the global elite powerbrokers have bankrupted the United States and destabilized nations around the world. At the same time, they have created a mass migration crisis that is purposefully subverting many previously prosperous societies throughout the northern hemisphere. Globalists, like George Soros, have also financed color revolutions around the globe as race-baiting leftist politicians, the Hollywood entertainment industry, and the American Sportsball Complex further incite hatred and divisions far and wide.

From a positive political standpoint, the Orwellian Trinity has nothing to offer so they have, instead, established a false “Russian Election Hacking” scheme, a hypersexualized “#MeToo” guilty until proven innocent campaign, and have, most recently, commandeered emotional and traumatized school children in a shameless effort to override the constitutional rights of law abiding citizens.

The American people grew tired of wars abroad and they elected Obama. Very soon, they realized how the community organizing Nobel Peace Prize recipient loved war more than Ares and Athena combined. So the people voted for Trump’s platform of immigration, trade, and “America First”. In the days leading up to, and following the 2016 Presidential Election, the Orwellian Trinity have forfeited their last remaining vestiges of credibility. Fake news was the final nail in the coffin for any respectability they once thought they possessed.

“While a narcissist has no interest in being good, they intensely want to look good.” – Peck, People of the Lie

Now Trump’s tax cuts are benefiting people as they are realizing more money in their pockets, consumer confidence is growing, and the poll numbers for the Orange One are rising. Soon, the Orwellian Trinity will need to collapse the economy in order turn the tide. Be assured, in the minds of The Collective, Trump’s tax cuts will be blamed. Never underestimate the reactive power of the Orwellian Collective who move in sync like a murmuration of Starlings.

For example, when conservative radio talk show host Rush Limbaugh, appeared on Fox News Sunday with Chris Wallace, on February 18, 2018, and conflated Russiagate with former President Obama, how did The Orwellian Trinity respond? The same way they did when FISAgate was getting too much traction and Deputy Attorney General Rod Rosenstein indicted 13 commie Cossacks who will never see the inside of a courtroom. Like rabid cats running in an alley corner, within hours following Limbaugh’s comments, another obscure Crazy Ivan was very conveniently indicted with allegations that special council investigator, Robert Mueller, plagiarized from a 2015 Radio Free Europe article. Once again, the Orwellian Trinity toyed with the emotional mice running around in the hearts and minds of their useful idiots.

Six Small Things That Are Messing With Your Sleep