Why Are There Paintings Depicting Ritual Abuse on Display at the Las Vegas Courthouse? 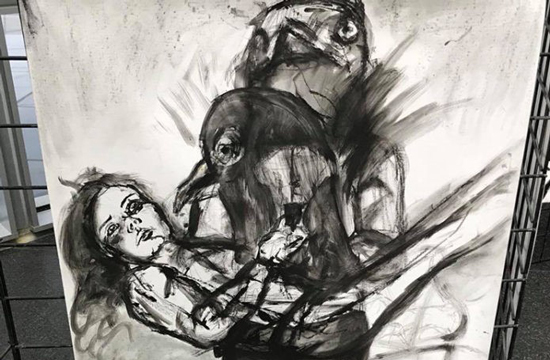 Disturbing paintings depicting various scenes of ritual abuse are on display near the entrance of the Lloyd George Federal Courthouse in Las Vegas.

The official website of the United States District Court of Nevada states: “The cornerstone of the American judicial system is the trial courts… in which witnesses testify, juries deliberate and justice is done.” – William H. Rehnquist, Chief Justice of the United States.
If that is the case, why are there paintings of birds raping people displayed at the Las Vegas Courthouse?

These paintings were hung in the very front of the courthouse, next to the main entrance. They are reportedly created by local high school students. Their teacher said to one of the complainants: “The students are learning that they don’t identify people by their faces.”

Nobody at the courthouse took responsibility for allowing these paintings to be there.
A closer look at these paintings reveals that their message goes way beyond “don’t identify people by their faces” (whatever that means). Indeed, the paintings are replete with imagery and symbolism relating to Satanic Ritual Abuse (SRA) and trauma-based mind control (known as Monarch Programming). They tell a disturbing story of abuse at the hand of extremely evil people, which leads to doubt that those were made by high school students.

A bird violating a young girl while another bird watches over. 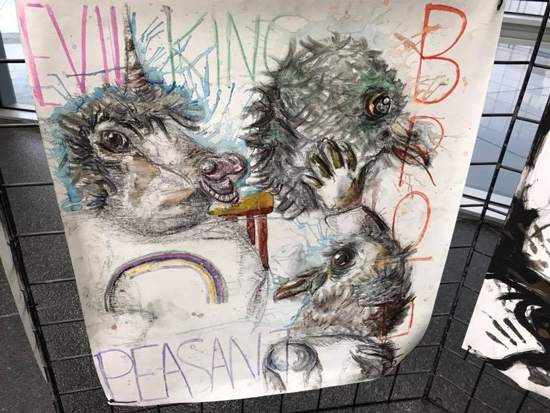 This painting depicts a unicorn under the words EVIL KING. On the right are two pigeons and the word BROTHER. Under the unicorn is a rainbow (a symbol of Monarch mind control) and the word PEASANT. 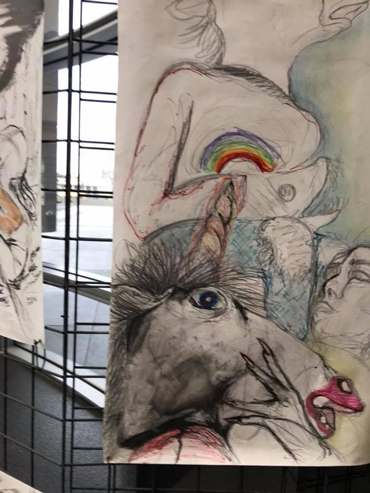 A unicorn apparently abusing a person underneath a rainbow. In MK programming, victims of trauma are told to “go over the rainbow” in order to dissociate from reality.

In occult symbolism, a unicorn is a phallic symbol (emphasized by its single horn). In ancient myths and legends, it is said that the unicorn can “only be tamed by a virgin”. 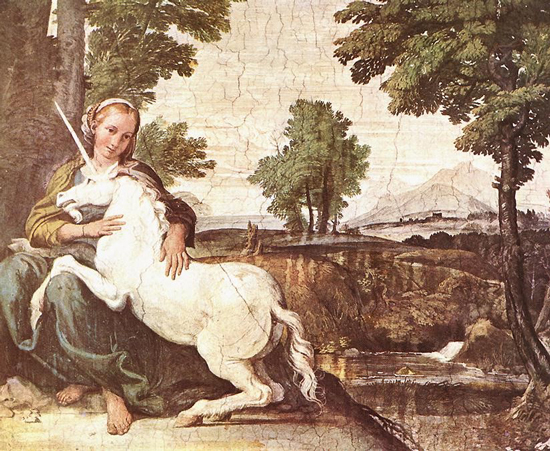 A classic depiction of a unicorn and a virgin. 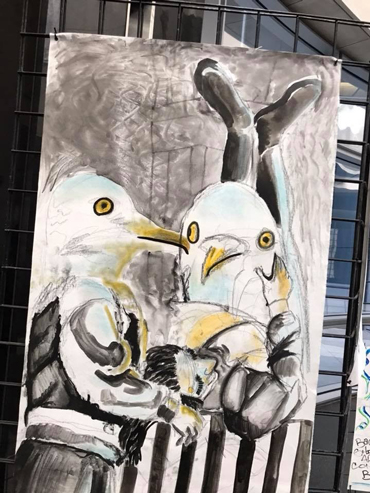 A bird violating a person while another bird watches over. 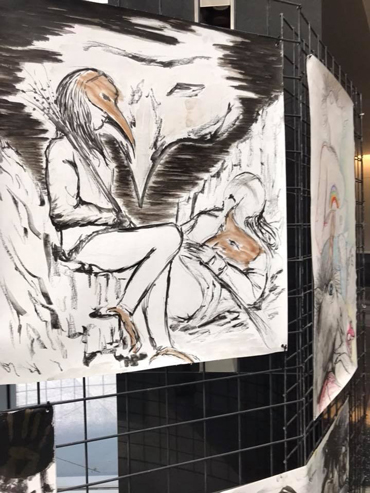 One person wears a mask inspired by plague doctors. The person on the right has no mask on and is faceless. Do the masked people represent victims of abuse who were robbed of their core persona? 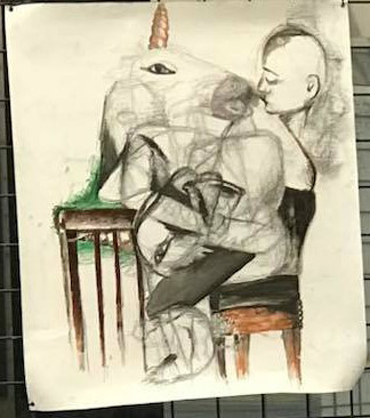 The unicorn (aka Evil King) deeply intertwined with a person. Does this represent an MK handler controlling the entire being of a dissociated slave? 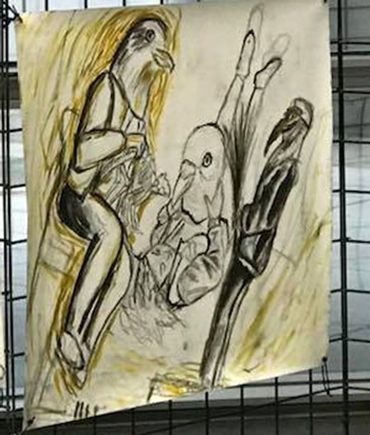 A bird violating a person while another bird holds something (for suffocation)? Behind them is a person wearing a mask. Another dissociated victim? 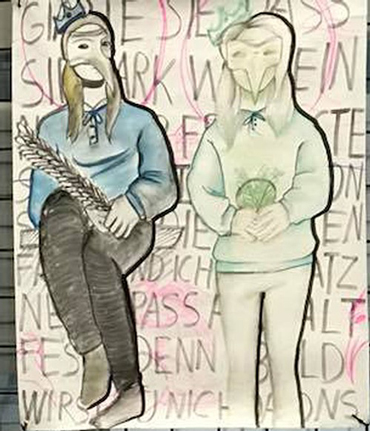 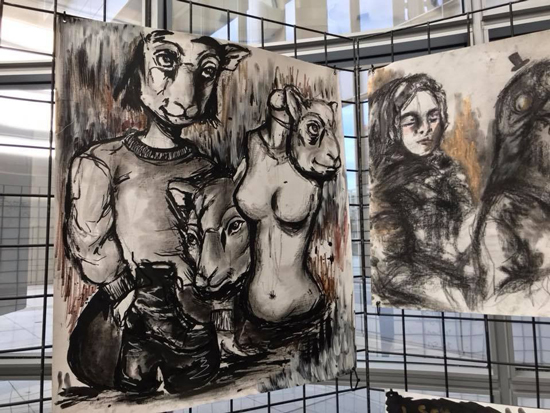 A headless and limbless mannequin wearing a mask. A typical way of representing powerless slaves.

These paintings are strikingly similar to the art of Kim Noble, a Monarch programming survivor. She is living with multiple personality disorder and has 20 different personalities. Her paintings are mostly horribly violent, pedophile and Satanic. 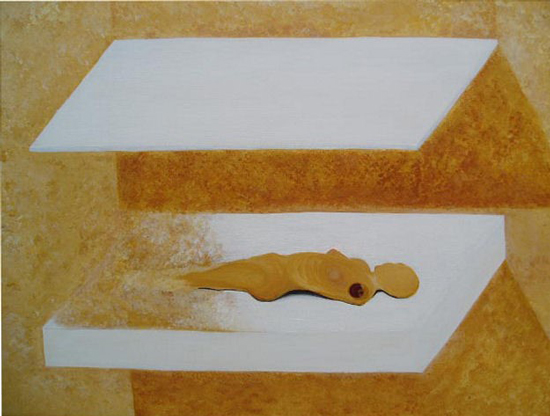 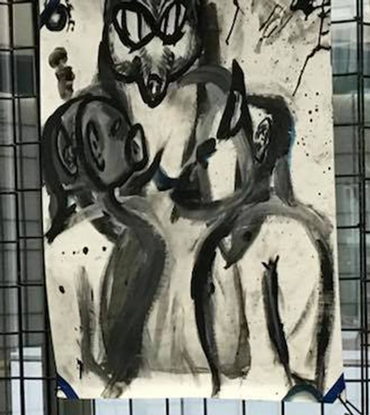 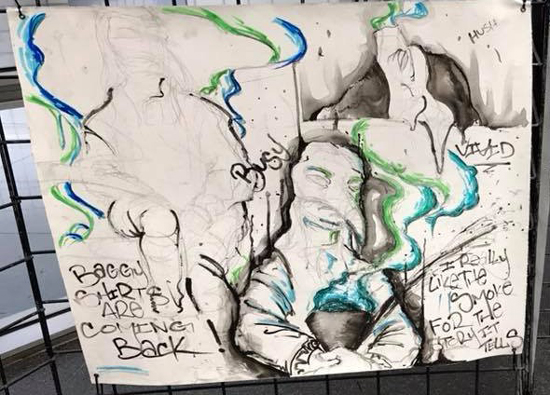 A masked person holds something that emits smoke. On the bottom right is written: “I really like the smoke for the story it tells”. On the left is a pale outline of a similar masked person. On the top right: a headless person who appears to be melting. Does this painting refer to the use of drugs to program dissociated slaves?

The series of paintings on display at the Lloyd George Federal Courthouse appear to tell a horrific story of ritual abuse. The main handler is represented by a unicorn (a phallic symbol) who is named “Evil King”. More abuse is committed by birds with human bodies. The fact that the abusers are animals probably alludes to the fact that dissociated slaves have little to no contact with reality. In all of the paintings, the slaves appear completely out of it or passed out.

These slaves are represented as faceless figures wearing masks, representing their core personality being replaced by an alter persona created by the handlers. The masks worn by the slaves resemble those worn in masked balls à la Eyes Wide Shut, where elite individuals partake in ritualistic copulation.

The aim of Monarch programming is to cause trauma so intense that it forces slaves to dissociate from reality as a natural defense mechanism. The paintings at the Las Vegas Courthouse depict exactly this process using disturbing symbolism.

Why are these horrific paintings displayed at a government building dedicated to law and justice?

How To Spot A Media Psy-Op