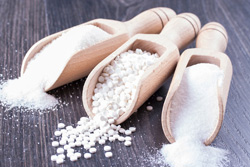 Aspartame – sold under the brand names NutraSweet, Sugar Twin and Equal – is one of the most popular artificial sweeteners available on the market. It is used as a low-calorie sugar substitute in more than 6,000 processed products worldwide, especially in diet or sugar-free foods and beverages.

While it remains the most used artificial sweetener, it has also faced controversy in recent years. As more and more research links aspartame to severe health effects, increasing numbers of people are becoming aware of this hidden poison and are trying to avoid it at all costs. That’s why Pepsi removed it from their diet soda in US in 2016, but keeps it in the product they sell in Europe.

Complaints of various health issues have been filed since aspartame first appeared on the market in the 1980s. As reported by The Nutritional Source, aspartame is one of the most exhaustively studied chemicals in the human food supply, with more than 200 studies completed.

Dr. Betty Martini, the founder of the worldwide volunteer force Mission Possible World Health International, which is committed to removing aspartame from our food, notes that aspartame has brought more complaints to the U.S. Food and Drug Administration (FDA) than any other additive; it is responsible for 75 percent of such complaints.

Over the years, more than 90 side effects – including vision loss, seizures, brain tumors, cancer and mild rashes – have been associated with regular consumption of aspartame. Furthermore, it can mimic the symptoms of diseases such as fibromyalgia, multiple sclerosis, lupus, ADD, diabetes, Alzheimer’s, chronic fatigue and depression.

When aspartame is processed by the body it breaks down into phenylalanine (50 percent), aspartic acid (40 percent) and methanol (or wood alcohol, 10 percent).

Aspartame can make you blind 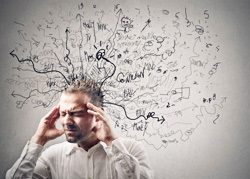 We have all heard the stories about alcoholics ending up blind or dead after drinking methanol during Prohibition. Aspartame consists of 10 percent methanol which our body further breaks down into formaldehyde and formic acid. These compounds accumulate in the retina of the eye and destroy the optic nerve, causing vision loss and blindness.

Furthermore, methanol poisoning may cause central nervous system depression, and can lead to metabolic acidosis and coma.

As reported by Dr. Martini, in 1986 the Community Nutrition Institute petitioned the FDA to ban aspartame because so many people had gone blind and had seizures. Despite the apparent link, the FDA, backed up by the drug and chemical industry, refused to take aspartame out of production.

It messes with your brain

Excessive amounts of phenylalanine block the transport of essential amino acids to the brain, which contributes to reduced levels of dopamine and serotonin. While our brains need this amino acid, too much of it has been linked to emotional and behavioral disorders and brain damage.

Furthermore, too much aspartic acid, another amino acid present in aspartame, can cause over-stimulation and death of brain cells. It leaks too much calcium into the cells and triggers excessive amounts of free radicals, which may damage and kill neurons.

G.D. Searle, the company behind the discovery of aspartame, was warned as early as 1971 that excess amounts of aspartic acid caused holes in the brain of mice and posed a serious threat to human health, yet nobody found it necessary to remove aspartame from the shelves. 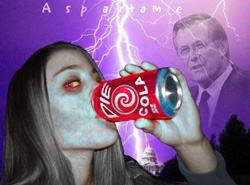 Before its approval, aspartame had been rejected multiple times over fears of brain tumors and cancer, the Huffington Post reported. In 1996, Dr. John Olney, who founded the field of neuroscience called excitotoxicity, and attorney James Turner, attempted to stop the approval of aspartame.

Even the FDA’s own toxicologist, Dr. Adrian Gross, told Congress that aspartame could cause brain tumors and brain cancer, and that approving it would violate the Delaney Amendment, which forbids putting anything in food known to cause cancer.

Sadly enough, Donald Rumsfeld – who was CEO of G.D. Searle and part of Reagan’s transition team – and Monsanto joined forces. In 1985, Monsanto purchased G.D. Searle, the company that held the patent to aspartame. They managed to pull a few strings and played a substantial role in the approval of aspartame by the FDA.

Aspartame is a substance that has been relentlessly scrutinized by the natural health community, and yet also receives an astonishing amount of praise from many mainstream medical practitioners. It’s heralded as a safe alternative to sugar – and some big businesses have even tried to pretend that their aspartame-loaded diet beverages could even be better than water. Sugar-free sweets, beverages and baked goods make it an easy concept for the majority to hold on to; it allows them to have what they want, guilt-free.

Unfortunately, the history of how aspartame came to be a societal mainstay is not a sweet one. Before becoming legal, aspartame was banned twice by the FDA. According to The Daily Health Post, in 1977, aspartame triggered the first criminal investigation of a manufacturer to ever be launched by the agency. The FDA went on to ban aspartame in 1980, after having three separate independent scientists study the sweetener.

Why? Because they found that there was a strong risk for aspartame to cause brain tumors. And of course, aspartame consumption is linked to a whole host of other health issues. According to New Zealand’s Safe Food Campaign, aspartame is linked to more health problems than MSG – a substance that is widely regarded as unhealthy and toxic. 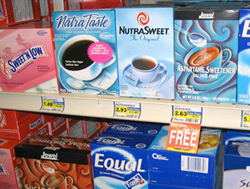 Emails belonging to John Podesta that were released by WikiLeaks, didn’t just provide a broader view of establishment corruption; they also uncovered concerns about NutraSweet, which is primarily comprised of aspartame. A person identified as Wendy Abrams forwarded an email chain about NutraSweet to Podesta in 2015. Abrams had been emailing a man identified as Don Kennedy, and expressed her concern about the addition of aspartame to chocolate milk used in school lunches. Chocolate milk is consumed at a ratio of 4 to 1, compared to plain white milk. Abrams writes, “The current proposal from the Dairy lobby is to put NutraSweet in the chocolate milk we serve to school children.” She also expresses her belief that this effort needs to be brought to a grinding halt.

In another email with Kennedy, Abrams writes about her own negative experiences with aspartame. She said that in college, she drank so many beverages sweetened with NutraSweet that she developed exercise-induced asthma and headaches. Abrams also made note of concerning information she had acquired.

“I also have a friend who worked for the researchers at University of Chicago (which has a top rated neurology department) and the doctors there said when they gave NutraSweet to lab mice, it literally blew holes in their brains. They said they will tell a pregnant woman to drink any amount of alcohol before touching a sip of NutraSweet, it is that bad.”

Kennedy responds by noting that he too has had great concerns over artificial sweeteners, and by divulging some concerning details about how aspartame finally came to be legalized. He explains that the day after Ronald Reagan’s inauguration, January 21, 1981, Searle – the original developer of aspartame – applied to the FDA for approval to use aspartame in food sweetener for a second time. Arthur Hayes Hull, Jr., Reagan’s newly appointed FDA commissioner, proceeded to appoint a 5-person scientific commission to review the board of inquiry’s decision.

When it became clear that the panel was going to uphold the ban with a 3–2 decision, Hull placed a sixth member on the commission so the vote would become deadlocked. Then Hull personally broke the tie in aspartame’s favor. Kennedy writes, “Hull later left the FDA under allegations of impropriety, served briefly as Provost at New York Medical College, and then took a position with Burston-Marsteller, the chief public relations firm for both Monsanto and GD Searle. Since that time he has never spoken publicly about aspartame.”

Does that seem a little suspicious to you? What is perhaps more upsetting is that people are aware this substance was approved under false pretenses, and yet no one has done anything to end its reign in people’s food.