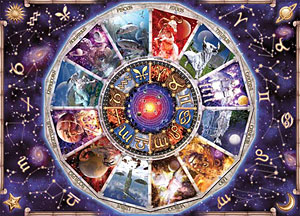 FIXED STARS
Alcor – Fixed star with a magnitude of 4, from the Ursa Major constellation (15º52’ Virgo). It is not a remarkable star, but it was used by the Arabs of the desert as a test of a good sight, because they use to look towards Canopus as the highest star and towards Alcor as the lowest star on the visual scale. It is called by Al Biruni „the pious woman” and recalls the German story of the poor Hans Dumkin which, despite his poverty, he offered shelter to Jesus. Because he wanted all his life to travel, Jesus rewarded Hans Dumkin – as the story tells – giving him the Alcor star to carry him through the world, allowing him to remain forever a clairvoyant. Thus, Alcor seems to be connected to the nature of the relation between Jupiter and Venus, conferring a compasive, quiet, prudent, controlled, patient nature.
Asterion – Fixed star with a magnitude of 4,3, from the Beta Canes Venatici constellation (17º42’ Virgo) having the nature of the relation between Saturn and Venus. Its influx confers a sharp mind, pleasure of hunting, stable relations, intelligence.
Biham – Fixed star with a 3,7 magnitude, from the Theta Pegasus constellation (06º50’ Pisces), having the nature of the relation between Mars and Mercury.  Its name it’s of Arabic origins and means „the youngest from the domestic animals”. It is said to be a lucky star. Its influence should be considered in the general assembly of the constellation.
Deneb Kaitos – Fixed star with a 2,2 magnitude, from the Beta Cetus constellation (2º35’ Aries), having the nature of the relation between Saturn, Mars and Mercury. Its name means „the whale tail pointing South”. It is told that it causes mental disorders, self-destruction through rough force, illness, disfavours, transformation that can’t be postponed anymore, psychological and physical inhibitions and limitations. In relation with Jupiter, it gives high ecclesiastical positions, but it also prones to hazards from the betrayal of hidden enemies.
El Koprach – Fixed star with a 3,8 magnitude, from the Chi Ursa Major constellation (03º40’ Virgo) having the nature of planet Mars. It is told to predispose to a quiet, prudent, controlled nature but also to suspicion, distrust, anger. Symbolically called „The Holy Grail” or the „Chalice of Jesus”, it confers idealism, psychic power, intelligence, honour and wealth, but rather these are seen as forms of spiritual elevation when the being passes by certain KARMA-ic purifications which prepares it for the spiritual liberation. 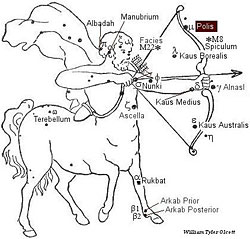 Facies – Fix star of 5.9 magnitude from MM2 Sagittarius (8º 18’ C), of the type of the relation Mars-Sun.
Denomination of Latin origin, derived from the verb „to make”. It has a bad reputation among astrologists because, when active in a theme, it predisposes to blinding, accidents and violent death. In its psychological aspect, the star indicates human beings who must materialize their beliefs and points of view through personal effort. They can encounter many failures, but they can get slightly hurt but, in the end, they will feel gratified by the value of their own actions, beliefs, aspirations.
Gienah (from Cygnus) – Fix star of 2.6 magnitude from Epsilon Cygnus (27º 45’ Aquarius), of the nature of the planets Venus -Mercury. It has this name (Giena from the Swan constellation) so that it can be distinguished from the Gienah in the Raven Constellation. It is said that it confers a contemplative nature, dreamily, cultivated and adaptable, attracted to water and nautical sports. At the same time, it predisposes to a certain emotional instability that causes the native’s talents to grow a little more difficult.
Kerb – Fix star of 4.6 magnitude from the Pegas Tharn (01º 03’ Aries), of the nature of the relation Mars-Mercury. Although it is part of a very important constellation in the meteorological changes, sometimes it is said that when it manifests its influence, the couples of lovers where love is not strong enough separate.
Kochab – Fix star of 2.1 magnitude from Beta Ursa Minor (13º 19’ Lion) of Saturn nature, one of the shiniest in the constellation. Its name means „the star” and it is said that it is the symbol of stability (constancy). It seems that, in the millennium that preceded our era, Kochab had the role of polar star.
Kraz – Fix star, of 2.8 magnitude, from Beta Corvus, (17º 22’ Libra) of the nature of the relation between Mars-Saturn. Its influence seems to be a contradictory one (and because of that very complex), because, (according to the way in which it is reflected by our inner nature) confers patience, passion, the capacity to awaken consciousness but also selfishness, revenge, falsehood, aggressiveness.
Mufrid– Fix star of 2.8 magnitude, from Eta Bootes (19º 20’ Libra) of the nature of the relation between Mercury -Saturn. The denomination of Arab origin means „the lonely star of the lancer”, as in the old times it was believed to be outside the constellation. The Babylonians used to call it , together with Arcturus, „the keeper of the celestial herds” or the „herdsman of the life in Heaven”, both forming one of the pairs of astronomical stars which were said to have the celestial function of watching over the rotation movement of Heaven (of the Skies) so that it never stops. It has a beneficent and long-lasting influence, sustaining heavy efforts, collective actions, deep transformations, total change of societies.
Nodus I, Nodus II – Fix stars of 3 magnitude from Zeta Draco (3º 23’ Libra) of the nature of the relation between Saturn-Mars. The Arabians called them „the she-wolves” or „the two hyenas” waiting for the camel calf (the latter being represented by the small star Al Ruba, which is „protected” by the „mother-camels” represented by the big stars Alwaid, Etamin, Kuma and Grumium). Their influence must be considered in the general assemble of the constellation.
Polis – Triple fix star, variable on a magnitude 3 from Mu Sagittarius (3º 13’ Capricorn) of the nature of the relation Jupiter-Mars. The Egyptian astrology calls it „the colt”. It was part of the asterism known as „the return of the ostriches” or „the bird of the dessert’’ that crossed the Milky Way. Polis confers ambition, martial abilities, the art of riding, kinetic perceptions, makes the native worth the trust of the others. It can be often found in the native theme of the officials from the spiritual world or of those of certain famous theologians. Well-aspected but not in conjunction with the Sun, or placed anywhere except for the 10th house, Polis indicates a person whose interest and knowledge in the spiritual field can be both impressive and very profound.
Sadalabchia – Fix star of 4 magnitude from the Gamma Aquarius (6º 43’ Pisces), of the nature of the relation between Venus-Mercury. Its name (of Arabian origin) means „the lucky star of the tents” because immediately after it rose, in spring, the tents of the nomads were raised again on the green fields. The other signification, „the lucky star of secret things”, comes from the fact that, together with its uprise, everything that before was hidden or difficult to find, now became visible, especially the lizards and dangerous animals from the desert. Its influence manifests, in the hourly astrology, as a capacity to discover all that is hidden. Thus, it indicates the bet time for modifications that can be paved with success, if it is well-placed and well aspected in the theme. 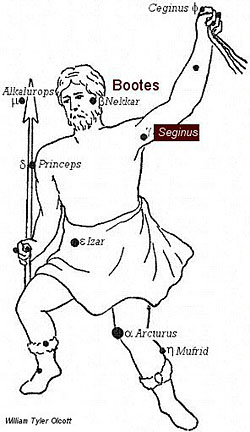 Seginus (Haris) – Fix star of magnitude 3 from Gamma Bootis (17º40’ Libra), of the nature of the relation Mercury – Saturn. Its name comes from the Greek theguius, „ploughman”, and its Arabian name, Haris, signifies „the guard” or „that who protects”, and it indicates the early asterism, the „she wolves” or „the hyenas” when the Arabs have not adopted yet the Greek system of constellations. Some astrologists say that the influence of this star can be perceived either as mental refinement or losing certain values of various nature because of friends. Others affirm that it confers a special gift for writing and eloquence.
Sualocin – Fix star of 3.9 magnitude, from Alpha Delphinus (17º23’ Aquarius), of the nature of the relation Mercury – Jupiter. It confers a pleasant appearance, the pleasure of hunting and of practicing sports, aptitude for ecclesiastic life and for voyages, but also predisposal to suffering caused by the state of ingratitude.
Zaniah – Fix star of magnitude 4 from Eta Virgo (4º 31’ Libra), of the nature of the relation Mercury-Venus. It a star with a very interesting significance and celestial „function”: it marks precisely the line of the celestial Equator. Its Arabian name means „the angle”. The Chinese used to call it “Tso Chih Fa”, „the one who preserves the Law with her left hand”. In the ancient Sumerian culture, Zaniah, together with another fix star, Zavijava, symbolized Nynsar, „Goddess of Herbs”. It is said that this star awakens and amplifies refinement, honor, order, elevated affection, the capacity of moderating effectively and even that of solving in a wise and just litigations and of bringing peace between people. Its association, in an astral theme, with a planet, seems to amplify its influence, „lowering” it (modulating it) with the nature of the respective planet.

THE MAIN ASTROLOGICAL MEANINGS OF THE 2010 OCCULT MOMENT OF HIATUS

Aphorisms and thoughts about the androgynal state, about happiness in couples and…

EXPLANATORY COMMENTS REGARDING THE MOMENT OF THE ANNUAL HIATUS 2010