As you can image, with all of this information internet gives us access to, come a lot of stories and a lot of disinformation. On top of that, for years, we’ve been subjected to an “official campaign of ridicule and secrecy” (as ex-CIA Director Roscoe Hillenkoetter put it) on the subject.

For UFO enthusiasts today, the field is no doubt still filled with disinformation, fake stories and more that seem to stem from some people either profiting off of it or who are perhaps part of what could be a highly intelligent disinformation campaign that’s still in operation today. 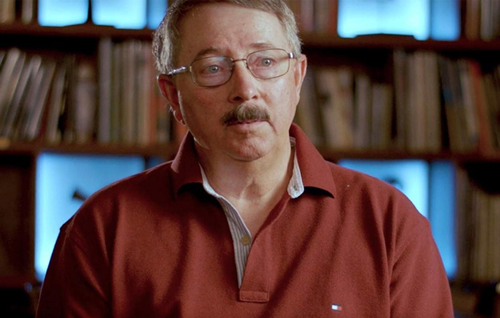 This was Richard Doty’s specialty, apparently. As a former Air Force special investigations officer, his job was to spread disinformation about the UFO phenomenon, a subject that he knew was very real.

He has admitted to infiltrating UFO circles, and his colleagues joined him as they often fed ufologists lies and half truths. This is something many believe is still occurring within the UFO community – multiple disinformation campaigns that are now perhaps more sophisticated as well as a number of frauds who are sharing their “experiences” when they’ve really had none.

As far as Doty’s identity, UFO researcher Alejandro Rojas wrote a piece for the Huffington Post in 2014 linking some very interesting documents regarding one of Doty’s misinformation missions, one of which he also speaks about in the interview below. The Guardian has confirmed his identity, as do these videos. But maybe the most interesting piece is a response from Hal Puthoff.

He is an American physicist who earned his Ph.D. from Stanford University. He is the Director of the Institute for Advanced Studies at Austin. His research includes theoretical and experimental projects in electrodynamics, quantum physics, gravitation, cosmology, energy research and more. His professional background includes engineering work at General Electric and Sperry as well as three and a half years spent at the U.S. Department of Defence.

He served various government agencies, the Executive Branch, and Congress as a consultant on leading-edge technologies and future technology trends. He has been awarded the DoD Certificate of Commendation for Outstanding Performance, post-doc appointments at Stanford University as Research Associate, and more.
He is currently part of the team at the To The Stars Academy and was also the co-founder of the US Government’s STARGATE program, which examined parapsychology.

Doty claimed that he worked with Puthoff on multiple occasions and also mentioned him in the interview below. Well-known UFO researcher Grant Cameron tweeted that Hal Puthoff confirmed Doty’s identity. Furthermore, another popular and well-known UFO researcher, James Iandoli, also asked Puthoff to comment on Doty’s claims, and he did. 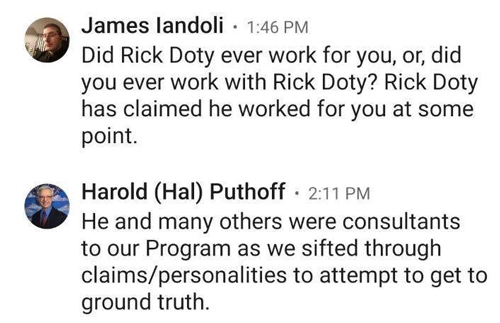 It’s safe to say that Doty is who he claims to be. Whether or not he is telling the truth is up to you to decide.

Furthermore, the interview below is conducted by Dr. Steven Greer, who is well-known for his contacts with high-ranking personnel with verified backgrounds. People like Puthoff, astronaut Edgar Mitchell, former Canadian Defence minister, and countless others have all given him some very interesting interviews on the subject, so there is a lot of credibility here.

In the interview, Greer asks Doty: “Have you heard of any of the projects that deal with ET simulations? There have been some contact events… The one you’re referring to, I have sources… that it was not actually ET.”

Doty replies: “We did do that, yes. OSI did that, there was a special group… that came out and did that. They had these people, they had maybe some sort of defects, anatomical defects that were brought in to fool people into thinking they’re aliens. I can’t give you any specifics because the program is still classified and they’re probably still doing it. I wouldn’t doubt that they’re still doing it.”

Greer goes on to emphasize that he’s had a number of contacts share this type of information.

Why?
Both of them mention how it’s used as a fear tactic. Doty provides an example of people having an experience or coming across information they weren’t supposed to about the subject and something like that may be a catalyst to stage such an event.

Who really knows – experimentation? Mind control? More disinformation?
The point of disinformation campaigns is to squander the truth and have the UFO community ‘run’ with it so that they continue to get even further from the truth.
The idea that some alien contact experiences are organized and run by the military and intelligence agencies, and even some abduction experiences as well, is a well-known strategy that has been used with regards to this phenomena for years. It’s a bit shocking to see someone like Doty admit to having knowledge of it.

The interview is a long one, as he speaks about different beings, propulsion systems with regards to reverse engineering these crafts, and more. The part about staging alien contact events occurs around the 1:21 minute mark.

Another Popular Source For Staged Events

Carol Rosin, the first female Corporate Manager of Fairchild Industries, was also referenced in some interesting WikiLeaks documents alongside astronaut Edgar Mitchell. Rosin stated in an interview with Greer:

“I met the late Dr. Wernher Von Braun in early ’74, at that time Von Braun was dying of cancer, but he assured me that he would live a few more years in order to tell me about the game that was being played, that game being the effort to weaponize space, to control Earth from space and space itself.

He asked me to be his spokesperson, to appear on occasions when he was too ill to speak, and I did. And what he asked me to do was to educate decision makers and the public about why we shouldn’t be putting weapons into space… and what the alternatives are, how we could be building a cooperative space system.

What was most interesting to me, was a repetitive sentence that he said to me over and over again… And that was the strategy that was being used to educate the public and decision makers, and the scare tactics, the spin that was being put on the weapons system. And that was how we identify an enemy.

And the funniest one of all was against what he called aliens – extraterrestrials – that would be the final card. And over and over and over, during the four years that I knew him and was giving his speeches for him, he would bring up that last card.

‘And remember Carol, the last card is the alien card. We’re going to have to build space-based weapons against aliens, and all of it’, he said, ‘is a lie’.”