Evidence found across the globe of highly evolved human species from before the Ice Age demand scientific recognition of our past that depicts societies of advanced technology and culture. 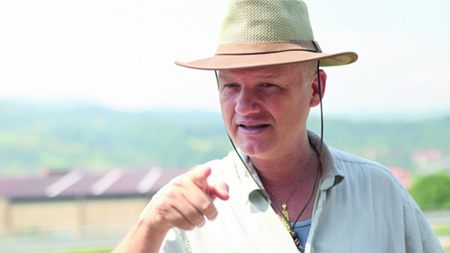 Houston anthropologist Dr. Semir Osmanagić, founder of the Bosnian Archaeology Park, the most active archaeology site in the world, declares that irrefutable scientific evidence exists of ancient civilizations with advanced technology that leaves us no choice but to change our recorded history.

An examination of the age of structures across the Earth reveals conclusively that they were built by advanced civilizations from over 29,000 years ago.
“Acknowledging that we are witness to fundamental proof of advanced civilizations dating back over 29,000 years and an examination of their societal structures, forces the World to reconsider its understanding of the development of civilization and history” explains Dr. Semir Osmanagić. “Conclusive data at the Bosnian Pyramid site revealed in 2008 and confirmed this year (2018) by several independent labs who conducted radio carbon testing dates the site at 29,400 +/-400 years minimum.”

The radiocarbon dating tests of 29,200 years +/- 400 years was done by Radiocarbon Lab from Kiew, Ukraine, on organic material found at the Bosnian Pyramid site. Physicist Dr. Anna Pazdur of Poland’s Silesian University first announced the news at a Press Conference in Sarajevo in August of 2008.
Professor of Classical Archaeology from the University of Alexandria Dr. Mona Haggag called this discovery “writing new pages in European and World history”.

The radiocarbon date of 29,000 years at the Bosnian Archaeological Park was obtained from a piece of organic material retrieved from a clay layer inside the outer casing to the pyramid. It follows a sample date obtained during the 2012 dig season on material located above the concrete at 24,800 years, meaning this structure has a construction profile stretching back almost 30,000 years.

“The ancient people who built these pyramids knew the secrets of frequency and energy. They used these natural resources to develop technologies and undertake construction on scales we have never witnessed on Earth”, said Dr. Osmanagić.
Evidence clearly shows that the pyramids were built as ancient energy machines aligned with the Earth’s energy grid, providing energy for healing as well as power.

Ancient historians in the US have news just as astonishing as anything found in the far corners of the globe. For instance, the Rockwall discovery outside of Dallas, Texas, is only one example of how Americans are now re-examining ancient mysteries to reveal more about their past, right in the United States. 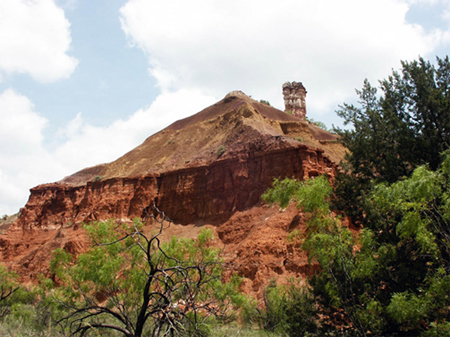 History 2 popular series Unearthing Ancient America filmed an episode about the Rockwall. The Texas site is a complex and massive wall ten miles in diameter built over 20,000 years ago and covered by soil seven stories below the ground.
The question is by whom was this structure built and for what purpose and, most importantly, how can knowledge left by these past civilizations help shape our future?

Newly-revealed or rediscovered traces of ancient civilizations have ignited an innate curiosity about human origins as reflected by recent coverage in mainstream media. The November 2013 issue of National Geographic: 100 Greatest Mysteries Revealed-Ancient Civilizations Unearthed says: “Sometimes cultures leave behind mysteries that baffle those who come after them, from standing stones to coded manuscripts, indications that ancient people indeed had a profound purpose.”

Forward-thinking scientists continue to pursue knowledge from our past that is useful to determine a better future. Renowned author Michal Cremo in his book Forbidden Archeology theorizes that knowledge of advanced Homo sapiens has been suppressed or ignored by the scientific establishment because it contradicts the current views of human origins that don’t agree with the dominant paradigm.
Cremo’s body of work has been described as “a useful teaching resource, raising a wide range of issues covering aspects of knowledge transfer, sure to be provocative in the classroom”. It has been reviewed with widespread appraisal by hundreds of academic journals.

Results clearly indicate that similar advanced civilizations of humans were present all across the globe at that time in history. For example, Gobekli Tepe located in Eastern Turkey, is a vast complex of enormous megalithic stone circles with a radius of between 10 and 20 meters, much larger than the well-known Stonehenge in Great Britain. 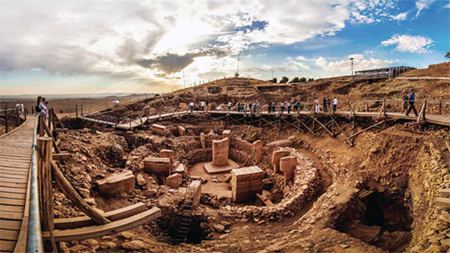 Excavations at Gobekli Tepe that began there in 1995 revealed radio carbon dating at least 11,600 years. German archaeologist Dr. Klaus Schmidt from the German Archaeological Institute, Berlin, Germany, with the support of ArchaeoNova Institute from Heidelberg, Germany, has led the excavation of these recently-discovered pre-historic megalithic circles at the Turkey location.

“Gobekli Tepe is one of the most fascinating Neolithic locations in the world”, Dr. Klaus Schmidt claims. But as he explains in a report, to understand the recent finds, archaeologists need to work closely with specialists in comparative religion, architectural and art theory, cognitive and evolutionary psychology, sociologists using social network theory, and others.

“It is the complex story of the earliest, large settled communities, their extensive networking, and their communal understanding of their world, perhaps even the first organized religions and their symbolic representations of the cosmos”, as reported by Klaus Schmidt. In addition to the megalithic structures, figures and carvings have been discovered, depicting animals of pre historic nature such as dinosaurs and other wild life. Since excavations started in 1995, four of the circles have been partially cleaned, but it is thought that there are a total of up to 50 circles hidden underground. 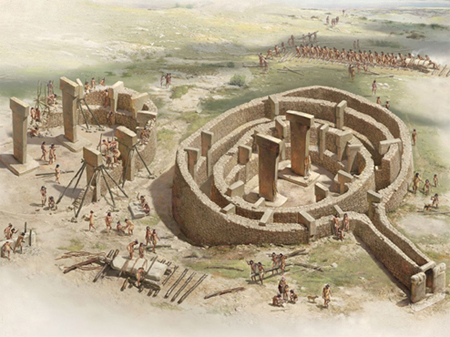 These vast monoliths, soaring seven meters in height and 25 tons in mass at Gobekli Tepe, are situated right in the heart of what we perceive as the origin of civilization. This find offers new guidance to the true history of Earth and our ancient civilizations. “Our archaeological research goal is not to simply uncover all of the megalithic circles but to try to figure out their purpose”, adds Schmidt.

Bosnian Pyramid: Proof of Advanced Civilizations from Over 30,000 Years Ago

The Bosnian Valley of the Pyramids, now in the eighth year of excavation, spans six square kilometers in the Visoko River Basin 40km northwest of Sarajevo. Comprised of four ancient pyramids almost three times the size of Giza and an extensive subterranean pyramid tunnel complex, new discoveries each year continue to reveal proof of a much different history of mankind on Earth.

The central pyramid of the Sun rises a colossal 420 meters in to the air and has a mass of millions of tons. By comparison the Great pyramid of Cheops (Khufu) in the Giza plateau is 146 meters high, making the Bosnian Pyramids the largest and oldest known pyramids on the planet.
Since research began at the Bosnian site, Dr. Osmanagić has amazed the scientific and archaeological community by gathering a team of interdisciplinary engineers, physicists and researchers from around the world to conduct open and transparent investigation of the site to try and discover the true nature and purpose of this pyramidal complex. 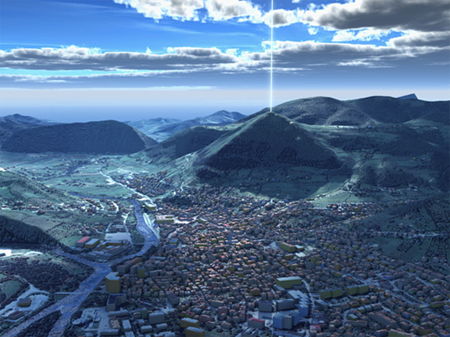 “This is an unknown culture presenting highly-advanced arts and sciences, technology capable of forming truly massive structures and we believe in that process demonstrating an ability to harness pure energy resources,” comments Tim Moon, who has recently joined Osmanagić as lead archeologist at the Bosnian site.

The archaeological project delivered another significant finding this year in the pyramid tunnel complex known as Ravine. Tunneling deep into a ridge line leading toward the Pyramid of the Sun the team has unearthed several megalith stones. 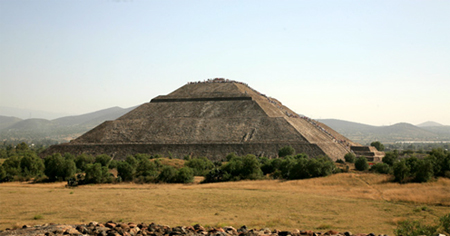 In August an enormous stone estimated at 25,000 kg was uncovered approximately 400 meters into the labyrinth. “This is a hugely significant find”, comments Moon. “Here we have a massive stone, possibly a constructed ceramic, buried under hundreds of thousands of tons of material. We are locating foundation walls around its perimeter and cut stone blocks.” Large quantities of artifacts have been recovered from the associated tunnels leading to the site, including effigies painted on stone, art objects and a series of hieroglyphics or ancient texts carved into the tunnel walls.

Dr. Osmanagić stresses that it is time for open sharing of knowledge so we can understand and learn from our past.
“It is time for us to open our minds to the true nature of our origin and destruction of each other as a civilization on this planet. Our mission here is to realign science with spirituality in order to progress as a species, and this demands a clear path of shared knowledge.”