How Your ‘Aura’ Affects Your Energy & Health, Backed by Science

An ‘aura’ field can be defined as a luminous glow or radiation that surrounds a person’s body, almost like a halo. Ancient depictions of religious and spiritual figures often feature this aura, but today, modern science is discovering that we are all, in fact, surrounded by this type of field, and it can actually affect the way we feel. 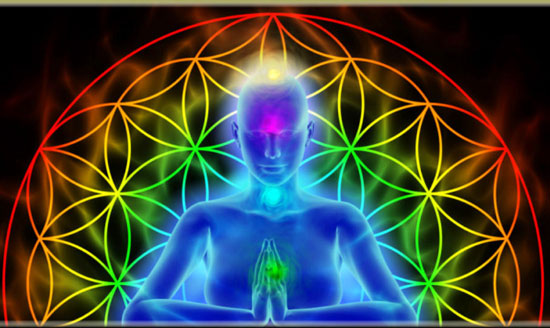 We know that energy cannot be seen with the naked human eye, which is why attempts to measure invisible phenomena scientifically are often greeted with harsh criticism, but thanks to the groundbreaking work of dedicated scientists from all over the world, the concept of non-material science is starting to become accepted in the mainstream. This refers to the idea that the physical material reality we perceive with our senses isn’t the only reality that’s available for us to study in a modern day scientific manner.

Before getting into how our aura can affect us and those around us, human thoughts, intentions, feelings and emotions – ‘factors associated with consciousness’ – have been shown to have a direct effect on and correlation to our physical material world.

“The stream of knowledge is heading toward a non-mechanical reality; the universe begins to look more like a great thought than like a great machine. Mind no longer appears to be an accidental intruder into the realm of matter, we ought rather hail it as the creator and governor of the realm of matter. Get over it, and accept the inarguable conclusion. The universe is immaterial-mental and spiritual.” – Sir James Jeans (“The Mental Universe”; Nature 436:29,2005)

Work by the brilliant scientists over at the Institute of HeartMath can perhaps best shed light on one aspect of human aura. A large portion of their research has investigated heart and brain interaction. Researchers have examined how the heart and brain communicate with each other and how that affects our consciousness and the way in which we perceive our world. For example, when a person is feeling really positive emotions like gratitude, love, or appreciation, the heart beats out a certain message.

Because the heart beats out the largest electromagnetic field produced in the body, researchers are able to gather significant data from it.

According to Rolin McCratey, Ph.D, and Director of Research at the Institute:
“Emotional information is actually included and modulated into these fields. By learning to shift our emotions, we are changing the information coded into the magnetic fields that are radiated by the heart, and that can impact those around us. We are fundamentally and deeply connected with each other and the planet itself, and what we do individually really does count and matters.”

Did you know that your heart emits electromagnetic fields which change according to your emotions, or that the human heart has a magnetic field that can be measured up to several feet away from the human body?

Did you know that negative emotions can create nervous system chaos, and that positive emotions do the complete opposite? The bottom line is, feelings of love, gratitude, and compassion – any positive feelings whatsoever – have a larger impact than we could have ever imagined.

The Heart’s Intuitive Intelligence: A path to Personal, Social and Global Coherence

It’s fascinating to consider how the heart’s magnetic field might be interacting with and affecting other people, and it leads me to wonder if perhaps the electromagnetic fields around our bodies are somehow connected to that of the Earth. What type of effect, if any, might the information coded into our electromagnetic fields have on the information coded into the Earth’s field? It’s all very exciting, and there are so many questions still left to answer.

Below is a video of Dr. Konstantin Korotkov, a professor of physics at St. Petersburg State Technical University, who believes that our positive and negative thoughts each have a different impact on our surrounding environment.

He has developed a scientific device based on the ancient Chinese system of energy meridians which measures the bio-energy of living organisms, as well as the environment. The device, called the GDV, uses a completely painless electrical current applied to the fingertips – taking less than one millisecond to work – to highlight potential health (physiological and psycho-emotional) abnormalities. The body’s response is measured in the form of an “electron cloud” which is composed of light energy photons. The glow of this discharge is invisible to the human eye (humans can only see one percent of the entire electromagnetic spectrum) and is captured by an optical CCD camera system and then translated into a digital computer.

In the GDV software programs, the glow from the different sectors of the finger images is projected onto the shape of a human body in correspondence with the location of the different organs and systems. As a result, it produces energy field images that allow for intuitive analysis of the physiological level of human body functioning.

It has been approved and received registration as a routine medical diagnostic device by the Russian Ministry of Health upon recommendation of the Russian Academy of Sciences.

According to Eastern metaphysical theories of Ayurvedic Indian medicine, there are seven “Chakras,” or integrated energy centers, correlated with physical, mental, emotional, and spiritual well-being. These energy Chakras are positioned or embedded into the spinal column at various locations beginning with the coccyx, rising all the way to the crown of the head. Dr. Pradeep B. Deshpande, a Professor Emeritus at the Department of Chemical Engineering at the University of Louisville, explains:
“Each Chakra is considered to resonate at a different frequency level. With new BioWell software, it is now possible to quantitatively estimate the energy of Chakras and graphically display their level of activation, and indicate whether this level of activation is above or below the level found from large numbers of subjects.”

The results from a case study he conducted involving over 100 participants in attendance indicate that imbalanced Chakras are easily detectable:
“Each individual sector or portion of the fingertip is connected energetically with specific organs and organ systems such as the respiratory system. When the data of the 10 individual BIO-grams are collated and interpolated, an image of the entire full body energy field is created. An example of the full body energy field from a healthy and unhealthy/emotionally unbalanced individual are shown in the image bellow. The gaps and the reduced emissions and out-of-balance Chakras for the unhealthy individual are quite obvious.” 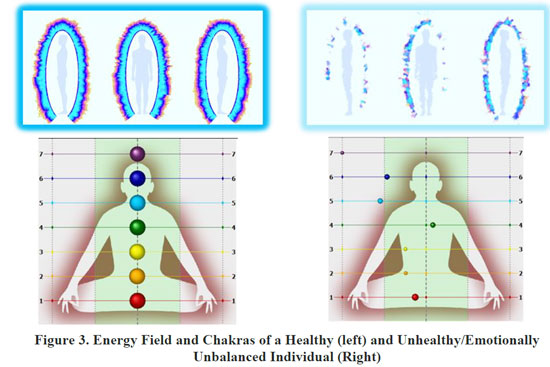 Please keep in mind that clinical studies of more than 10,000 patient cases with various health challenges have also been well documented in Russia.