Improving your health through meditation

Meditation is one of the best ways to relax, reduce anxiety, improve memory, and even increase compassion. Physiologically, these benefits are brought about by the changes in brainwave activity during meditation. There are five brain wave frequencies: Gamma, Beta, Alpha, Theta, and Delta. 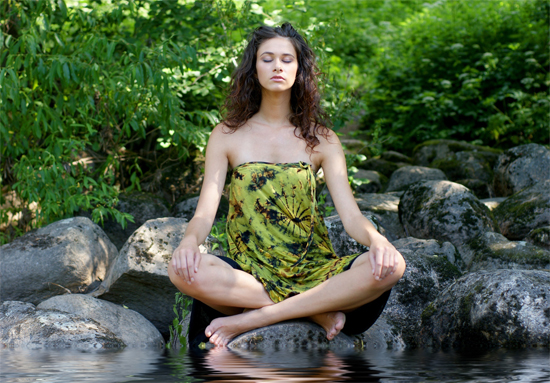 Though anecdotal, the positive effects of mediation have long been known by yoga practitioners, pray circles, and new age thought enthusiasts. But did you know that these claims have now been backed up by science and modern technology? MRI scans verify that changes in brain chemistry occur as a result of meditation. For example, anxiety and panic attacks have been linked with high beta waves, while alpha waves are associated with a more calm and relaxed state.

The power of meditation has even been proven to reduce pain simply by focusing on removing the discomfort from the body. MRIs have been used to visually see the reduction in pain that occurs after the use of pharmaceuticals.

Changes of color can be seen in the “pain areas” of the brain before and after the pharmaceuticals have taken effect. Findings of this nature have helped researchers determine which drugs are more beneficial in reducing pain. But as researchers were studying the correlation between pain and brain activity, they were led to another unexpected discovery.

The placebo effect also showed remarkable changes in brain activity that resulted in pain reduction as well. Is it possible that we have the power to control pain simply by the thought and belief that it is possible? And, could an individual without years of training use tools such as meditation as a means of pain relief?

Another study set out to find answers to these questions.
A chronic pain sufferer was put into an MRI to track the changes in brain activity throughout a specific meditative exercise. The patient was instructed to relate the pain to a burning flame, and to solely focus on lowering the intensity of the flame. The premise was to see if the patient’s pain levels dropped as he focused on reducing the imaginary flame in his mind. Amazingly, as the patient reported the reduction of the flame via mental concentration, the MRI concurrently showed a decrease of activity in the area of the brain that directly relates to pain.

Too little gamma waves can cause ADHD and depression, and by practicing meditation you can increase gamma waves.

There is something that is directly related to meditation that we take for granted every day – breathing.

Deep breathing, in and of itself, is a form of meditation. In fact, we all subconsciously use deep breathing whenever we feel stress, anticipation, or need to calm ourselves from feelings of anger.

Deep breathing for a few minutes every day can have amazing results on your health. For example, deep breathing:

Though meditation may be practiced in any position, yogis incorporate the use of strength and flexibility by practicing poses in conjunction controlled breathing. Increasing flexibility results in the follow health benefits:

– Reduces joint pain by reducing muscle tension on the joints;
– Decreases the risk of muscle injury and promotes more agility in movement;
– Improves posture;
– Increases self-confidence by allowing one to participate in more activates without pain;
– Improves the lymphatic system.

The benefits of meditation are numerous and there is now mounting evidence to support its place in a healthy lifestyle. We are all busy with our day-to-day routines revolving around family, friends and professional obligations. And the thought of carving out time to meditate may seem daunting, perhaps even self-indulgent. But who can’t spare just five to ten minutes a day? Because even just a short meditative period will result in a more relaxed, focused and compassionate you.

We All Need To Unite Against War in Syria, Regardless Of Ideology