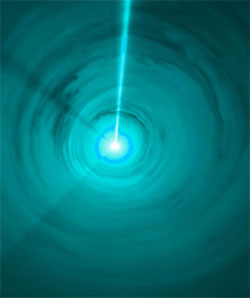 Russia has developed first radio-electronic weapons system based on so-called new physical principles, a United Instrument Manufacturing Corporation (UIMC) spokesperson told RIA Novosti in October 2016. “Real models of these weapons have been already developed and proven their effectiveness. This is a completely new type of weapon that has no equals either in this country or, we won’t be afraid to say, in the world” the spokesperson said at the ArmHitec arms and defense technologies exhibition in Armenia.

First radio-electronic weapons samples based on new physical principles (beam, geophysical, wave, kinetic and other types of weapons) have been first unveiled at the closed Russian Defense Ministry exhibition on the sidelines of the Army-2016 forum in September. The UIMC spokesperson added that the new weapons can strike targets without the use of ammunition – instead, a directed energy beam is used. “It has an indirect physical impact on air-borne equipment of planes and UAVs, and neutralizes high-precision weapons”, he said.