For most of us, mistletoe is that fuzzy and festive twig we wrap in red ribbon and place above door frames. However, mistletoe is about a lot more than stealing kisses during a certain time of the year. It is, in fact, a “heavy hitter” when it comes to healing cancer. And there are literally hundreds of studies to prove it! 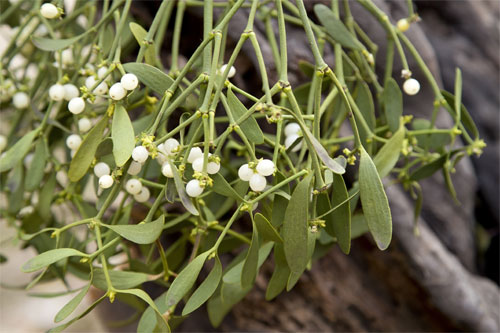 Those who lived before us discovered so much about the healing power of God’s plants. Ancient peoples knew this miraculous herb was special because of the healing properties it contained. Mistletoe was considered sacred to the Celts and the Norse of the European continent a thousand years ago and was also used by Native American peoples.
In Roman times, a philosopher called Pliny the Elder wrote that the Celts used the plant as an antidote to poison and also as a fertility herb for their livestock.

The word mistletoe means “all heal” in the Celtic language.
In truth, mistletoe (Viscum album is the European variety and Phoradendron serotinum is the American variety) is actually a parasitic type of vegetation. It grows on a “host” tree and can stunt that host or even kill it if mistletoe grows and gets out of hand. In reality, however, it is its will to live that has inspired awe throughout the centuries. It has the ability to flourish when other trees and shrubs cannot. It can grow seemingly out of “thin air” and in a variety of conditions as well.

In modern times, mistletoe has been researched extensively, and is actually used to this day in some countries for the treatment of cancer. It has been used by European doctors, as well as oncologists, for almost a century.

The Austrian philosopher, architect and researcher Rudolf Steiner (1861-1925) first introduced it to the modern world in this capacity and it is still one of the main healing herbs for anthroposophical (Steiner-based) doctors.

Dr. David Riley, Editor in Chief of Alternative Therapies in Health and Medicine journal and Clinical Associate Professor at the University of New Mexico says that there is “…mounting basic science and clinical evidence for the efficacy of mistletoe as an adjunctive cancer therapy for solid tumors.” He writes for Steiner Health, an anthroposophical health website, that “Mistletoe is the most commonly used cancer drug in Germany today.”

According to Dr. Ralph W. Moss, a former science writer for the Memorial Sloan-Kettering Cancer Center: “By some estimates, 40 percent of French and up to 60 percent of German cancer patients receive this botanical extract.”

Very recently, actress and natural health advocate Suzanne Somers brought mistletoe into the forefront in the United States when she spoke about how she used a German-based commercial form of mistletoe called Iscador to help her heal from breast cancer in 2001.

Various mistletoe preparations have been used for cancer therapy since 1917. Today, they are most frequently used as complementary therapies in tumor treatment. Mistletoe’s effects on cancer have been researched in over 100 clinical trials.

The Science Behind Mistletoe’s Cancer-Killing Effects

Simultaneously, mistletoe reduces the side effects of conventional cancer treatments and may help patients survive the harsh side effects of chemo and radiation. Helixor is a cold extract made from fresh mistletoe, obtained from fir, pine and apple trees. Some physicians administer Helixor mistletoe enemas to patients with rectal tumors.

So what makes mistletoe so effective at eradicating cancer? The healing powers of mistletoe appear to come on two fronts. First, it is outright cytotoxic to cancer cells, inhibiting tumor cell growth in a number of cancers. Secondly, it is described as being a catalyst for the “nonspecific stimulation of the immune system.”

Mistletoe contains a wide variety of inflammation-reducing, immune-stimulating phytonutrients. These include alkaloids, phenols, phenylpropanoids, polysaccharides, flavonoids and others. The foundational cancer-targeting element, however, is lectin. This substance above all others has been identified as the active principle in mistletoe’s cytotoxic and immunomodulatory potencies. 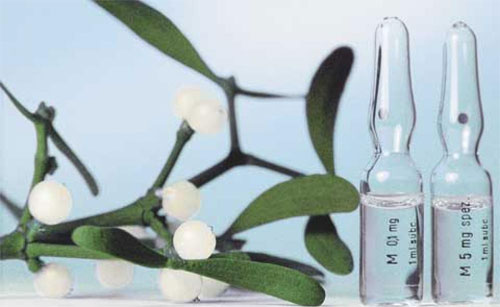 “Lectins, they are visco-toxins, which induce apoptosis, which act as immune-modulators,” states Dr. Sandeep Roy of the Cancer Care Foundation, Department of Mistletoe Therapy for Cancer Management in Nashik, India. “Your immune system is boosted up. And through apoptosis, the tumor shrinks. The tumor markers come down. Your quality of life improves. Your mental ability, your general wellbeing, your anorexia, insomnia, pain, everything of – your weakness, everything comes back to normal.”

Roy has dedicated his professional life to studying the cancer-killing effects of mistletoe. He stated: “The second most studied mode of cancer treatment is mistletoe therapy, after chemotherapy and surgery and radiation.”

And those studies are impressive. Many have found that mistletoe extract by itself induces cancer cell apoptosis (cancer cell death). One of the most groundbreaking of the studies was a United Nations-initiated investigation which monitored 35,000 German residents over three decades. During the course of those years, 5,000 of the residents were diagnosed with various forms of cancer. Those who took mistletoe extract lived an average of 40% longer than those who used conventional treatment alone.

Mistletoe as a p53 Promoter

P53 is a gene that causes cancer cell growth to stop, or even die!

Cancer was a rare occurrence prior to the industrial revolution. Why? Because we ate whole foods not containing hormones, additives, and carcinogenic chemicals. There is no better form of cancer prevention than eating whole foods and regular exercise. Talk with your health practitioner about incorporating some of the elements in this list above!

Mistletoe can help ease the harmful consequences of and also improve the targeting effects of conventional chemotherapy drugs for cancer as well. A 2010 study conducted by the University of Bern in Switzerland looked at mistletoe’s effect on cancer when combined with the chemotherapy drug Cytoxan (cyclophosphamide). The researchers observed both malignant and healthy cells. They found that administration of mistletoe extract doubled the activity of healthy immune system cells. The mistletoe also upped anti-cancer cytokine levels as well.

Another study conducted in 2014 and published in the journal BioMed Research International found that mistletoe can improve the quality of life and also increase the life expectancy of cancer patients who use traditional cancer treatments.

Is Mistletoe for You?

Mistletoe is serious medicine when it comes to cancer. For that reason, be sure to consult with your health professional before taking it in any form, since it can be poisonous if taken improperly. Besides the extract version, usually in the form of Iscador, some doctors are also starting to administer mistletoe injections. For rectal cancer, sometimes suppositories or enemas are used. All and all, mistletoe can be a serious part of your healing protocol, whether you use conventional cancer treatment methods or not.