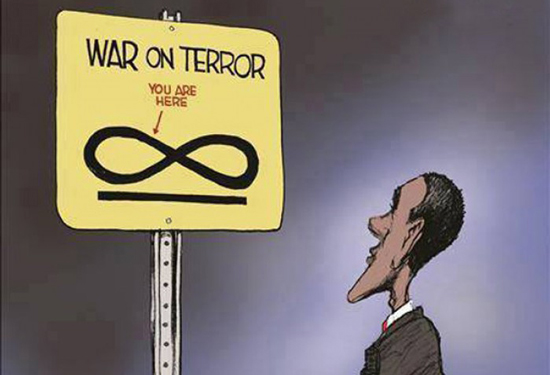 An influential neoconservative US think-tank has released a publication declaring the post-9/11 War on Terror a complete failure. The report outlines a new era of US foreign policy for combating the global “terror” network by redefining the enemy as “Salafi-jihad”. But of course, real causes and solutions are completely ignored.

Despite labeling itself as bipartisan, the American Enterprise Institute (AEI), based out of Washington D.C., had substantial influence on foreign policy during the post-9/11 Bush years. Members of AEI’s staff were driving forces behind Bush-era foreign policy and the infamous War on Terror. But now, analyst Katherine Zimmerman of AEI’s Critical Threats Project admits the Bush era’s War on Terror has failed and a new enemy must be defined. But the future looks dismal as ever.

Zimmerman argues that US counter-terrorism efforts have wasted too much energy focusing on military solutions without fighting to counter the global Salafi-jihad movement. Military solutions, indeed, are only temporary and do nothing to stop the spread of the mass movement.

Most US counter-terrorism efforts target specific groups such as al-Qaeda or Daesh (ISIS) keen on carrying out attacks on western targets and key individuals within these groups. However, these high-profile groups just keep growing stronger and recruitment is still high. She points to six failed states (Iraq, Syria, Yemen, Somalia, Libya, and Mali) as Salafi-jihad hot spots and four weak states (Nigeria, Tunisia, Egypt, and Afghanistan) as being on-the-brink.

Furthermore, Zimmerman argues that the global Salafi-jihad movement is also stronger than ever. Warning that this movement is a global insurgent force waging war against us. Where the US has carried out the same strategy for years, extremist groups have changed their tactics after making mistakes. So they adapted to new material conditions while the US fell short.

So the analysis is halfway reasonable at this point. Yes, the global Salafi-jihad movement must be smashed. But where did it come from? Who funds and supports it? And yes, the War on Terror has completely failed its objectives. But that’s because it was a joke to begin with. These “failed states” didn’t just collapse on their own without a helping hand.

Redefining the Enemy, But Not the Right One

Since the extremists shift their tactics, Zimmerman argues that US policy ought to do the same. And in order to do that, a new enemy must be named. That new enemy is Salafi-jihad. She offers the chart below to demonstrate the concept (which Geopolitics Alert has recreated).

She defines Salafi-jihad as a group or individual “committed to the use of armed force to achieve their aims: to create a true Muslim state by imposing their interpretation of shari’a. Salafi-jihadis argue that it is an obligation for Muslims today to purify Islam, which was polluted over the centuries by innovations (bid’a),and that the method of purification will necessarily include violent jihad.”

Here’s where things get interesting. When you read the quote above, Saudi Arabia probably is the first entity to come to mind. Wahhabism, after all, was created as a way to politically enforce a fundamentalist bastardized form of Islam and thus create a “pure” Muslim state. It’s a relatively new ideology when you take the entire history of Islam into account. And its creation gave-way to the rise of violent acts carried out today in the name of jihad against all non-believers (especially other Muslims).
And right there, on the chart, Saudi Arabia is listed not far away from al-Qaeda and ISIS. There it is. The neocons are finally admitting the Saudis are a state sponsor of terror! Not so fast. Despite describing the Saudis as “violent Islamists” on her chart, Zimmerman does not mention the Saudis’ ties to terrorism – not once. In fact Saudi Arabia is actually portrayed as a victim of Salafi-jihad.

How can you highlight the threat of the global Salafi-jihad movement without explaining where their funding and support comes from? And what about the “Islamic” schools Saudi Arabia funds in areas like central Asia and Europe? Surely the state sponsors teaching and living this ideology should be addressed first and foremost.
It’s also no surprise that Zimmerman whitewashes Reçep Tayyip Erdogan’s reforms. They are a NATO member after all.

How Did This Happen?

As you can imagine, the neocons have a distorted view of how things got to this point. According to Zimmerman, it all started with the Soviet Union in Afghanistan. Where Salafi-jihadis flocked to fight in the 80s. Of course, her analysis doesn’t explain who was waiting there with open arms full of weapons. (Hint: it was the US.) The very “freedom fighters” US forces armed in Afghanistan would later become al-Qaeda and the Taliban. But that part she omitted.

She blames “chaos” created by the Arab Spring without acknowledging who created that chaos. Libya was a stable country before NATO killed Muammar Gaddafi. And look at Libya now: Islamist warlords run the place. Libya did not have this problem prior to NATO intervention.

We see it again in Syria and Iraq. If the US never occupied Iraq, ISIS probably wouldn’t exist. If the US never funded so-called “moderate” extremists in Syria against Bashar al-Assad, groups like the former al-Nusra and ISIS wouldn’t have been able to flourish. The only constant in these situations is US intervention and occupation. Where the US causes chaos, violent Islamist groups flourish. How can anyone but the United States and Saudi Arabia be to blame? Especially when they rely on these very groups to help exert pressure on entities like the Syrian Arab Army and Hezbollah.

Of course, the forces actually fighting violent Salafi-jihadists on the ground are blamed: Iran, Russia, Ansarullah. As though their resistance against these violent groups is making the problem worse. 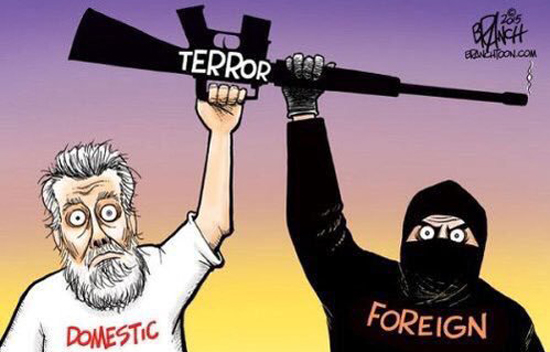 The obvious solution would be to stop supporting state-sponsors of terror like Saudi Arabia and Israel. Instead focus should be on building alliances with entities actually fighting Salafi-jihadists like Iran, Syria, Russia, and militias inside these failed states.

But of course that’s not going to happen. Instead, Zimmerman proposes the ridiculous idea of breaking the bond between local Sunni communities and Salafi-jihadists. Which, when combined with military force, will probably just result in an exponentially higher number of civilian casualties.

Sure, some local communities might have to tolerate the existence of al-Qaeda or the Taliban since they serve the function of a basic state providing services. (Not to mention the imminent threat of death.) But that’s usually because the United States has stepped in and destroyed the previously functioning state by arming Salafi-jihadist groups. So focusing on “Sunni marginalization” whether real or perceived, is going to do nothing but make innocent Sunnis living under terrorist control the victims of US so-called counter-terrorism efforts.

The Saudi Arabia-Qatar feud is still ongoing. At some point the US will have to stop playing both sides. The Saudis have pointed the finger at Qatar as a state sponsor of terrorism. But the US state department praised Qatar for their so-called efforts countering terrorism in the region. And we cannot forget that Turkey – a NATO member – has jumped to Qatar’s defense.

While Zimmerman’s analysis doesn’t necessarily dictate foreign policy objectives, it should still be taken seriously in some respects. Not in that her arguments are valid or correct – far from it. But that this analysis could likely have significant influence in the current era of US foreign policy.

Unfortunately, the global Salafi-jihad epidemic won’t slow down until United States imperialism and support for state-sponsors of terrorism ends.

Natural Remedy For Cleaning Your Eyes and Improving Vision in Only Three Months: Here is What You Need to Do to Avoid Surgery!