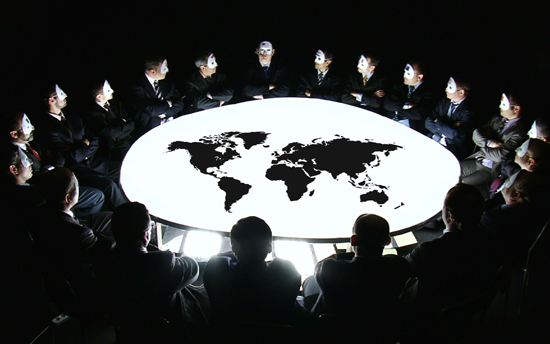 What Is The New World Order?

The New World Order is a term that has been used many times throughout history. This article is devoted to mapping out the US-based, Democrat-led push for a single world government. Liberal political think-tanks push the agenda, the NSA and Fourteen Eyes enforce the decries. These “illuminated” thinkers think they know what is best for you and they slowly mold what was once a free nation (USA) into a shadow of her former glory filled with debt-slaves, scared to speak out against The Powers that Be. These technocrats have names and their agendas are clear, yet few know this sordid tale of ego-maniacs, spies, hackers, and their goal of dissolving borders and destroying people’s freedom.

War leads to the erosion of liberty for the benefit of the military-industrial complex. World War II set in motion the destruction of privacy and the formation of an Orwellian Police State controlled by the National Security Agency (NSA) of the United States of America. Under the guise of cooperation and mutual respect, countries signed secret agreements with the NSA to share signals intelligence (SIGINT) which in layman’s terms means your phone calls, instant messages, and more. Shortly after World War II, the United States and its allies built the ECHELON system to spy on land and satellite-based communications worldwide. Their closest allies, dubbed The Five Eyes (FVEY), received privileged treatment from the NSA community wherein these five countries share resources on a grand scale. The Five Eyes are also known as AUSCANNZUKUS, short for AUStralia, CANada, New Zealand, UK, and US. As time progressed, the Five Eyes added two more tiers to their club: the Nine Eyes and Fourteen Eyes. The Fourteen Eyes are officially known as SIGINT Seniors Europe, or SSEUR but we can unofficially call them: The New World Order. 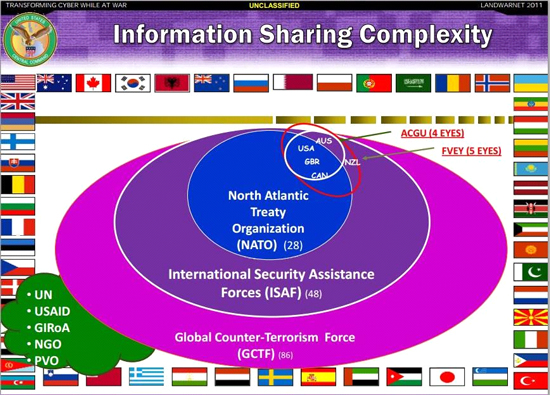 This Anglosphere-based NWO group is now hell-bent on a United Nations based one-world government, with a single digital currency worldwide, and a completely disarmed populace. The Snowden disclosures should be enough to wake the people, however informal gas station polls show that Average Joe has no clue. Each member of The Fourteen Eyes of the New World Order is subservient to the Five Eyes, and all other nations are enemies of the one-world government. To see this any other way is to have eyes and yet be blind.

The Fourteen Eyes use their combined technocratic might to infiltrate, subjugate, and excommunicate all who oppose their political or financial agendas. The Five Eyes use their illuminated status to enslave the Nine side-kicks, as was the case during the WikiLeaks disclosure of the US. government pushing Monsanto GMO corn into France, a Nine Eyes member. The US State department also used their NSA and 14 Eyes to spy on anti-GMO activists in Paris, and “calibrate a target retaliation list that causes some pain across the EU since this is a collective responsibility, but that also focuses in part on the worst culprits.”

Occupy Wall Street suffered a similar fate. Through a combined lame-stream propaganda campaign and targeted domestic spying by the Department of Homeland Security, the will of the people was mocked, shunned, and silenced. The Fourteen Eyes form a freedom-slaying Voltron that is worse than Orwell’s nightmares.

The Fourteen Eyes feed a “brain” in Nevada at the Utah Data Center. The NSA uses this massive database to silence activists, silence Congressmen, and even silence Generals. Still the question remains, who controls the NSA?

How can any progress toward less government, less war, free energy, more freedom, and common abundance ever occur when globalist ideologies and Big Brother are hell-bent on destroying our borders, taking people’s defense systems, and ensuring nothing you do can stop the progress towards a one-world government? “The Fourteen Eyes will have their New World Order so don’t protest, buy the GMO corn, go shopping, stay scared!” 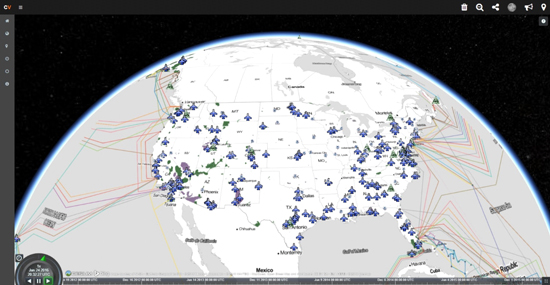 Canadian Forces Sub-Lt. Jeffrey Paul Delisle walked into the Russian Embassy in Ottawa in 2007 and offered to sell secrets to that country’s military intelligence agency, beginning an espionage career that lasted almost four years, according to court details revealed by CBC News after the naval officer pleaded guilty to spying.

Delisle, 41, pleaded guilty in a Halifax court to breach of trust and two counts of passing information to a foreign entity between July 2007 and Jan. 13, 2011, in Ottawa and Kingston, Ont., and Halifax and Bedford, N.S., where he lived. According to previously unpublished material from a bail hearing, Delisle walked into the embassy wearing a red ball cap and civilian clothes. He flashed his Canadian military identification and asked to meet with someone from GRU, the Russian military intelligence.

Delisle was posted to the security unit HMCS Trinity, an intelligence facility at the naval dockyard in Halifax. It tracks vessels entering and exiting Canadian waters via satellites, drones and underwater devices. While there, he worked on a system called the Stone Ghost, said CBC reporter Rob Gordon. “It’s a computer system that links the five eyes. The five eyes are the United States, Britain, Australia, New Zealand and Canada. All their information is shared on the Stone Ghost computer.
He would go to work every time with a thumb drive and download reams of information, which he would then send to the Russians on a monthly basis. This went on for years and years and years.”
He was paid between $2,800 and $3,000 a month for the information. In 2009, when Delisle wanted to stop dealing with the Russians, they sent him a picture of his daughter walking to school in Halifax.

The National Security Agency routinely shares raw intelligence data with Israel without first sifting it to remove information about US citizens, a top-secret document provided to The Guardian by whistle-blower Edward Snowden reveals. Details of the intelligence-sharing agreement are laid out in a memorandum of understanding between the NSA and its Israeli counterpart that shows the US government handed over intercepted communications likely to contain phone calls and emails of American citizens. The agreement places no legally binding limits on the use of the data by the Israelis.

Some observers regard any U.S. surveillance efforts with suspicion, fearing that intelligence products will be used against their national interests, the privacy rights of their citizens, or to advance the interests of U.S. firms in competition for international business. This view is held even though it is well-known that many countries have long undertaken similar efforts. Nonetheless, some argue that electronic surveillance, except in a narrow, court-approved, law enforcement context, should not be undertaken by democratic governments. 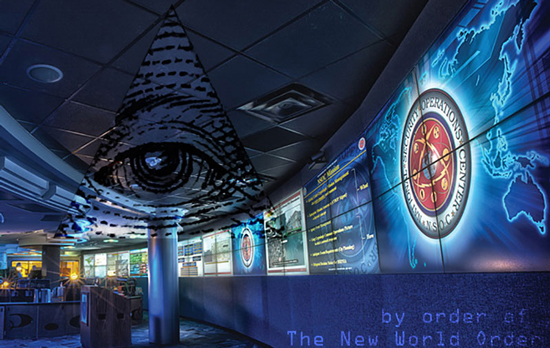 U.S. defense contractors hired to use cyber warfare and social media sock-puppets to sway public opinion against WikiLeaks, discredit journalists/activists.
HB Gary Federal, a US defense department cyber security firm, was hacked (allegedly by a 16 year old girl) and its emails were uploaded to torrents and websites. In those emails, the public learned that prominent law firms hired Berico Technologies, Palantir Technologies, and HB Gary to create fake Facebook, Twitter, and YouTube accounts to post online as if they were real people and influence your opinion.

Each person could run more than 50 different accounts, all with complete “online” life histories to add authenticity. Their purpose? Discredit all associated with WikiLeaks through coercion and convince the public that WikiLeaks, Glenn Greenwald, and Julian Assange are terrorists.

The U.S. government uses Stone Ghost, the United States SIGINT System (USSS), and Fourteen Eyes mass surveillance to attack, harass, and intimidate citizens on behalf of U.S. based corporate interests. Moratoriums on Monsanto’s famous “MON 810” genetically modified (GMO) corn are being passed all across Europe due to people’s belief that these products are unsafe. Instead of respecting the people’s will, US state department considers making a “target retaliation list that causes some pain across the EU” to help out their struggling buddies at Monsanto, according to a WikiLeaks cable:

“4. France’s High Authority on agricultural biotech is designed to roll back established science-based decision making. The recently formed authority is divided into two colleges, a scientific college and a second group including civil society and social scientists to assess the ‘common interest’ of France. The authority’s first task is to review MON 810. In the meantime, however, the draft biotech law submitted to the National Assembly and the Senate for urgent consideration, could make any biotech planting impossible in practical terms. The law would make farmers and seed companies legally liable for pollen drift and sets the stage for inordinately large cropping distances. The publication of a registry identifying cultivation of GMOs at the parcel level may be the most significant measure given the propensity for activists to destroy GMO crops in the field.

5. Both the GOF and the Commission have suggested that their respective actions should not alarm us since they are only cultivation rather than import bans. We see the cultivation ban as a first step, at least by anti-GMO advocates, who will move next to ban or further restrict imports. (The environment minister’s top aide told us that people have a right not to buy meat raised on biotech feed, even though she acknowledged there was no possible scientific basis for a feed based distinction.) Further, we should not be prepared to cede on cultivation because of our considerable planting seed business in Europe and because farmers, once they have had experience with biotech, become its staunchest supporters.

6. Country team Paris recommends that we calibrate a target retaliation list that causes some pain across the EU since this is a collective responsibility, but that also focuses in part on the worst culprits. The list should be measured rather than vicious and must be sustainable over the long term, since we should not expect an early victory.”

Let it be known: if you are an anti-GMO activist living in the United States of America or abroad, the full might of the Fourteen Eyes, the NSA, and the Stone Ghost surveillance machine will bear down on you in defense of Monsanto. How many more companies are on the “cool kids” list? 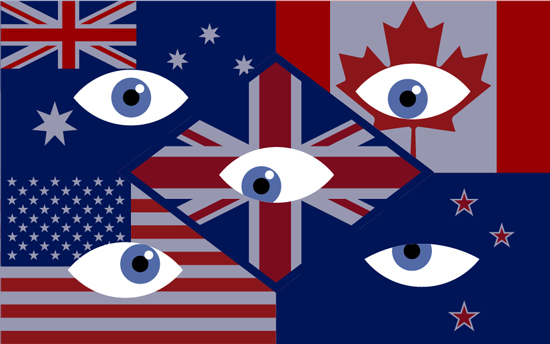 Nothing is private. Nothing is secure. The Eyes of the New World Order are watching you.

Fourteen Eyes of the NOW

Do you really understand the health risks from microwave technology?