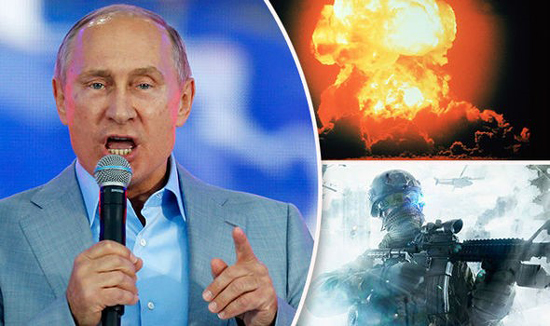 Russian President Vladimir Putin has revealed Russia’s deadly new weapon that he says is “worse than nuclear bombs”, amid growing World War 3 fears. Putin made the announcement that Russian scientists had entered the “next phase of development” for genetically-modified soldiers to be used in military combat. He warned a crowd of young students that by breaking the genetic code, the world will soon see super-human soldiers who “cannot feel pain or fear”, the likes of which had previously only been possible in science fiction.

When asked if the other governments had access to similar scientific advancements, Putin laughed, saying: “Whilst the Western governments are busy protecting the secrets of their precious celebrities, Russia is advancing to become the number one superpower. Our scientists have made breakthroughs that are unprecedented in the rest of the world.”

Putin said that science is moving at such a fast pace that the world is running out of the time to develop regulations around these eerie advances. This comes amid escalation on the Korean peninsula and mounting fears of the outbreak of nuclear war between North Korea and the US. The Russian leader revealed that the possibility of “creating a human with predesigned characteristics” was already here.

Speaking to a youth festival in Sochi, Putin said: “A man has the opportunity to get into the genetic code created by either nature or as religious people would say, by God. All kinds of practical consequences may follow. One may imagine that a man can create a man not only theoretically but also practically. He can be a genius mathematician, a brilliant musician or a soldier, a man who can fight without fear, compassion, regret or pain. As you understand, humanity can enter, and most likely it will in the near future, a very difficult and very responsible period of its existence. What I have just described might be worse than a nuclear bomb.”

The Russian leader went on to warn that these developments are inevitable, but he urged world leaders to come together to develop ethical guidelines around such “creations”. He said: “When we do something, whatever we do, I want to reiterate it again – we must never forget about the ethical foundations of our work.” The festival Putin spoke at was organized by the World Federation of Democratic Youth (WFDY) along with the International Union of Students.

Vladimir Putin’s warning comes after it became public news that the US DARPA agency is working since 2011 to create such genetically modified super-soldiers, who are also given technological implants.
Chinese scientists have also announced success in similar experiments on dogs, which have led to fears the same technology could be used to create weaponized super-humans.

Endgame: Disclosure and the Final Defeat of the Cabal (10)

The plastic pollution problem is wide and deep