Sacred Geometry and the Art of Scriptural Writing (1)

Sacred Geometry has all the appearance, to the uninitiated, of having little or no purpose other than generating beautiful symmetrical patterns. To those uninitiated the meanings of the patterns coming from this genre of thought appear to be in the eye of the beholder. 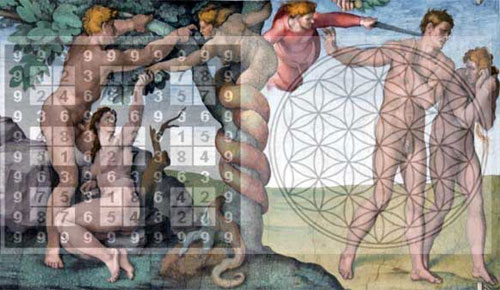 Those teaching Sacred Geometry give the impression that they are more or less guessing at what the symbols of the science are conveying. Where did the ideas come from that expresses the DOT, the LINE and the CIRCLE: the rudiments of the science? What does it all mean? Is this the end all and be all of the science of geometry, to produce patterns that have little or no meaning?

Such questions makes one realize why Plato insisted that the initiate have at the very least an education in the Seven Liberal Arts: the mathematical and the grammatical arts – the Trivium and the Quadruvium. For such training was, for all intent and purpose, the Baptismal Fount of the Mystery Schools of antiquity.

Pouring water over the brow of a new born baby is symbolic of educating the child in the religious teachings of its culture. This ostensibly is the sole reason why the child has a Godfather and a Godmother present during the Baptismal Ritual because they have sworn an oath taken on the responsibility of the child’s religious education; however, modernity is ceaselessly forgetful and/or gives little thought to the rites of antiquity.

The First Chapter of Genesis

The first rule in reading the sacred scriptures is that the text interprets itself. There are very stringent and succinct rules and regulations that become apparent and they must be followed conscientiously or chaos will ensue. There are twenty-two (22) letters and five (5) final letters, which make up the Hebrew coder. Each of the Hebrew letters has a symbolic meaning and an alphanumeric designate; however, each of the twenty-two letters is also a word, which is spelt out with several or more letters giving it multifaceted definitions and/or a unified comprehensive theme.

The Hebrew coder is grouped into nine columns of three rows according to their lowest common denominators: meaning that those letters that have the same digit 1-9 are interchangeable. For example: ALEPH (1 – Elohym = Moon), YUD (10 – Yahweh = Sun) and QOPH (100 – Most High El = transcendent) can take on each other’s attributes seeing collectively they represent the Trinity as defined by Christianity. These twenty-two plus five final letters exemplifying the Hebrew coder are the powers of creation that engenders the Word of God.

It should be understood that the internal compositional structure of the esoteric science gives irrefutable evidence that the Old and New Testaments were written simultaneously, no matter what the histories of these cultures have to say on the subject, to augment each other exoterically and esoterically: they have a symbiosis that engenders the Word of God.

Neither the exoteric nor the esoteric is the Word of God, these tools of communication merely engender it, which can only be ascertained by the individual desiring to know God. This last cannot be transmitted by word of mouth. It is similar to Virgil, Beatrice and Saint Bernard guiding Dante through the three realms of spirit: Inferno, Pugatorio and the Paradiso. Dante is finally left on his own to envisage the Trinity. There is a chasm that cannot be traversed between two individuals and this is it.

One astounding piece of evidence representing the symbiosis of the Old and New Testaments and the fact that they were generated simultaneously is present in the last four letters of the Hebrew coder that spells out the word CHRIST (krst) in Greek using Hebrew letters [Qoph (100), Resh (200), Shin (200) and Tav (400): these are the first four letters into creation].

“The New Testament is a very terse and succinct commentary on the esoteric science codified to the Old Testament”. There are exactly 434-Hebrew words in the first chapter of Genesis and there is only one Hebrew letter when spelt out that has that Gemetria value and that is DALETH, which is the fourth letter and has the symbolic meaning of DOOR. Here, immediately, the text of the Torah interprets itself as the “Door to creationˮ; however, DALETH (4 – door) can also take on the attributes of MEM (40 – waters) and TAV (400 – Mark on the Forehead: i.e. Kundalini Serpent).

The following pages will outline in more detail the concepts laid out in the last paragraph. 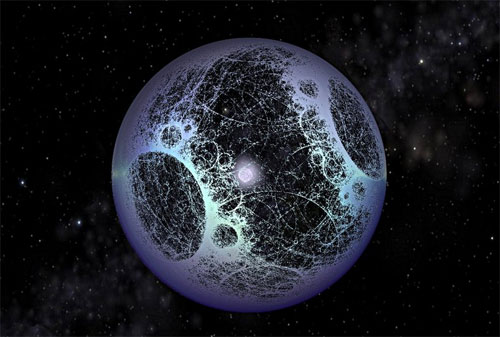 These two letters, having a symbiotic relationship, are exuding the secret of life. Thus, the entire Old and New Testaments are commentaries on the interface between BETH and PEI. BETH and PEI literally in their symbiosis represent the Tai Chi symbol of LIGHT and DARKNESS i.e. the Vesica Piscis and this will be discussed and demonstrated further on. The main problem that confronts the initiate is to envisage the esoteric, contemplatively, codified to the exoteric.

BETH being the first letter of the Torah is spelt out Beth (2) – Yud (10) – Tav (400): 412. This is a septenary 1, 2, and 4, which represents the birth of ego-consciousness. The very concept of 1 – center, 2 – up and down and 4 – north, east, south and west is reinforced into the conceptual concept of the first word of Genesis: BERESHITH and that will be discussed further.

On a purely contemplative level BETH should be envisaged as a sphere with the Sun at the center, which would make it a Dyson Sphere. Note that the letter YUD is equidistance between the letters BETH and TAV as if inferring two radiuses. Note that within the letter BETH both the letters YUD and TAV reside. In other words this is what is contained within BETH. The moment that a center is identified a diameter of that circle is conceivable. In the case of the sun, as in a solar system, there are infinite possibilities for diameters to be conceived but, what about the letter TAV that represents the door, the waters of life and/or the Kundalini Serpent?

PEI must not be forgotten, in all of this, by any stretch of the imagination, because it is the key to understanding the letter BETH. PEI by itself is not just PEI. It is Pei and Beth combined in equality; whereas, BETH gives no credence to PEI’S existence, this is why Pei is not recognized in the Dyson Sphere.

It is known that PEI represents symbolically both PEI (female – Moon) and BETH (male – Sun) because Pei is symbolically the Mouth of God and the entire texts of the first chapter of Genesis interprets it as such The Tai Chi symbol. Whereas, BETH does not include PEI in its entourage because it is self-centered representing ego-consciousness. The moment that the spiritual light (transcendent) comes into the world it splits off into opposites. Yahweh – Sun and Elohym – Moon: the waters of creation.

All opposites are variations on this duality. PEI being the Mouth of God denotes a set of 32-teeth upper and lower creating in the center an unseen Vesica Piscis, Word of God. There are precisely 32-uses of the word Elohym (God) in the first chapter of Genesis and this will be discussed further. The word Yahweh has the Gemetria value of twenty-six (26) and the word Elohym has the Gemetria value of eighty-six (86). Combined they represent two-hundred and eleven (211). RESH (200), YUD (10) and ALEPH (1): 2 + 1 + 1 = 4: the Door or the Waters of Life or the Kundalini Serpent.

In other words the door swings both ways, there are two serpents wrapped around the Tree of Life and there are two parts hydrogen and two parts oxygen in the compositional makeup of water. It is when Pei is recognized by Beth in the Dyson Sphere that the conditions are ripe for the Trinity to be in consensus and a new heaven and a new earth are forthcoming and the creation of the word BERESHITH is in order. This is why “the spirit of Elohym hovered over the face of the waters” in the second verse of Genesis. The old heaven and earth has to give up the ghost: in other words the sun has to set: the old sun god is dead and a new raison d’être is on the horizon.

The nuances in the letter MEM (waters) was extremely interesting in how it was structured esoterically. The letter MEM is spelled Mem-Yud-Mem or “the waters above the heavens and the waters beneath the heavens” with YUD (firmament) in the center as outlined in the second day (Gen. 1:6) of creation: suggesting that the ‘firmament’ is the Vesica Piscis. Water being two parts hydrogen and two parts oxygen suggest 22-letters in the Hebrew coder. Yahweh represent 26 = 8 and Elohym represent 86 = 5: combined they create a set in the Fibonacci sequence of the Golden Ratio. 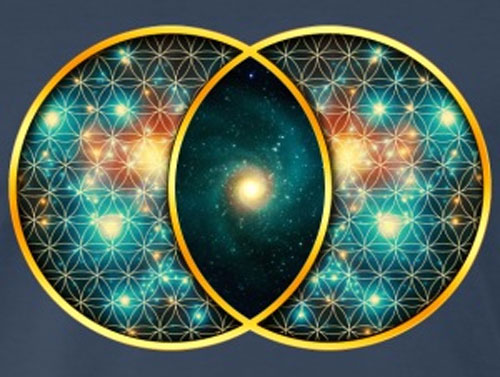 Once it is recognized that the letter PEI is inundating and surrounding the Dyson Sphere (BETH) then it is easily visualized that the text of the Torah is dealing with a binary system: not a two star system but rather a Sun and Moon system and within the center of that binary system is the ‘waters: Yahweh = Sun and Elohym = Moon’, which is the Vesica Piscis. This is known because the fourth day of creation explicitly states that the two great luminaries were placed within the ‘made’ firmament (Gen. 1:6, 17).

It is now known that there is a Vesica Piscis in this analysis of the letter BETH/PEI. PEI (80) is spelt Pei-Aleph with a Gemetria value of eighty-one (81 = 9 x 9 square = Kamea of the Moon). Thus, it can be seen why PEI symbolically represents the Moon. ALEPH symbolically represents Elohym, which the Zohar says represents the Moon. Each of the letters PEI and BETH represents their own Dyson Sphere, which each places some of its waters in the center and the Sun and Moon circles these selected waters. The reader should not jump to conclusions here and imagine that the water is the earth. The earth will come into the mix shortly. The reason that PEI and BETH are seen here circling the waters is because both the Sun and the Moon affect the tides of the oceans. In psychological parlance it can be said that both ego-consciousness (sun) and the unconscious mind (moon) affects the life of the individual.

Stop here for a moment and briefly consider what has thus far been culled out of the written letter BETH. A great deal of information has been ascertained from just the study of the letter BETH from the Torah’s written text. How does it help the initiate to know that all of this above data is compact into this lone letter BETH. Coupled with the knowledge that PEI is part of its construct, BETH is married as ONE with the letter PEI? It has been learned that BETH is a container and PEI its esoteric companion. It has also been envisaged that PEI represents a Star and as a mouth has 32-teeth: both these symbols will have strong influences on the main body of text in the first chapter of Genesis. It has been noted that in representing symbolically a binary system BETH/PEI form a Vesica Piscis.

Narcotics and Covert Intelligence: How the CIA Commandeered the War on Drugs (1)