Have these temples ever existed?
What was the message encoded in their architecture and dimensions? 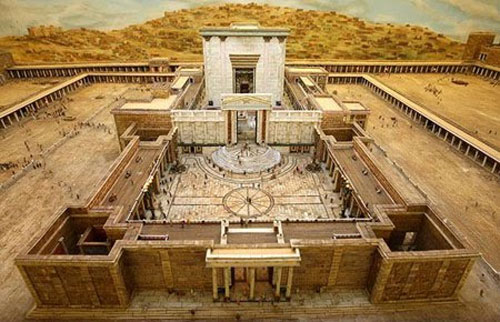 Ezekiel’s Vision of a Temple

(According to South Indian Temple Architecture)

We find in Book of Ezekiel the description of linear measuring scale in very beginning in the chapter Ezekiel’s vision of Temple. 40.3 – 40.5:
“When he brought me there, behold, there was a man, whose appearance was like bronze, with a line of flax and a measuring reed in his hand; and he was standing at the gate way.”

“And the man said to me: ‘Son of man, look with your eyes, and hear with your ears, and set your mind upon all that I shall show you, for you were brought here in order that I might show it to you; declare all that you see o the house of Israel.’”

“And behold, there was a wall all around the outside of the temple area, the length of the measuring reed was six long cubits, each being a cubit and a hand breadth in length; so he measured the thickness of the wall, one reed; and the height, one reed.”

By keeping the importance let us begin our discussion in detail step by step.

Linear measuring scales: In India, especially in Tamil Nadu, different type of ancient linear measuring scales (Kol) were found by various researchers and archeologists. The most common scales are Mannai Kol, Ulagalantha Kol, Nilamalantha Kol, Nanjai Kol, Punjai Kol, Kuli Kol and Sirpanga Kol. In addition there are also few linear scale such as Thalai Kol etc. We observed the linear scale with the same name are varies in its measurements also remains a mystery.

Location: Mostly we can observe the ancient linear measuring scales marked on the base (Athisthanam) of the temples, walls of temples, temple floor, and temple vestibules and near by the entry gates of temples.

Direction: Ancient linear measuring scales were found towards north or south direction, in very few cases towards east or west.

Identification: It can be identified with two or three or more plus (+) marks. Some cases only with the vertical lines and few were found with plus (+) mark at the ends and vertical line or lines in the middle. The distance in between the both marks at extreme end was the actual measurement of the scale.

The name of the scale inscribed within the marks, or nearby. There are many cases the details about scale mentioned in the ancient script inscribed on the nearby walls.
By considering the importance of the linear measuring scale, we shall discuss in detail also by referring the various ancient texts.

Sun: In the Brahmanic texts, the Sun is Cosmic Intelligence and the light it radiates is intellectual knowledge (Chevaller and Cheerbrant, 1973, 4, p.216, s.v. Solell). It is the abode of Brahman and Purusa and the seat of the cyclic legislator, Manu.

The Sun’s rays measure out the worlds, bring all things into existence, and quicken all beings: “Thou alone, O Sun, art born about the whole world” (AV XIII.2.3). 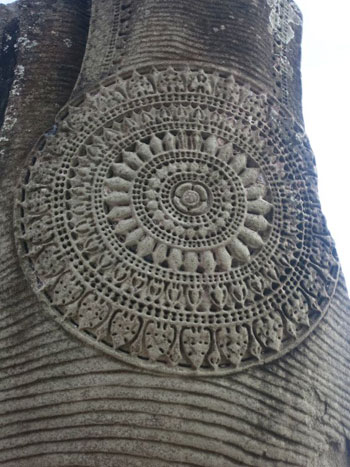 The Sun is the sacrificial Person who is “poured out upon the earth from East to West” (RV X.90.5). It divides itself to fill the worlds (MU VI.26) but yet remains undivided and whole among divided things (BG XIII.16 and XVIII.20), “for in as much as he is that (Sun) in yonder world he is one, and in as much as he is numerously divided here on earth among living beings, he is manifold” (SB X.5.2.16).

The smallest ancient linear measurement was “Paramanu”. According to Brhatsamhita 57.1, when the sun’s rays pass through a close network (jala, lattice), the breath of a single beam of light, which is extremely minute (anutara) is identified as a “paramanu” (atom). This, of course, is not discernible by human eye, although it is conceded that adepts (yogis) can develop the power to perceive it.

Measurement: The Purusa (Prajapati), the non-supreme (apara) and first form of the supreme Brahman (Para-Brahman), identified with Visavkarman, the Architect of Universe, bears the measuring rod (mana, from ma), knows the divisions and thinks himself composed of parts. Thus divided and measured out, Purusa thinks of himself as the Goddess Uma, whose name, like maya, is from root ma, “to measure”: she is the “the measured out”, the manifested world come into existence by the thinking of Purusa. By thinking himself as divided and composed of parts he measures out cosmos.

He measures it (the fire altar) by finger breaths: for the sacrifice being a divine man (Purusa), it is by him that everything is measured here. Now these, to with the fingers, are his lowest measure (avama matra). He thus secures for him (the sacrificial man or the Yajamana) that lowest measure of his and therewith he thus measures him. He measure by twenty-four finger-breaths-Gayatri verse consists of twenty-four syllables, and Agni is of the Gayatra nature. “As great as Agni is as great as his measure, by so much he thus measure him.ˮ (SBr. X. 2.1.2.3)

5.1: All habitations are defined by their dimensions. I am going to present as well, methodically though in few words, the system of measurements.

5.2: The Manangula is known to be a multiple of an atom, defined as that which can be perceived by the vision of those who have mastered their senses.

5.3-6a: Eight atoms are equal to a speck of dust, in multiplying each eight time by eight, we go from a speck of dust to the tip of a hair, then to a nit, to a louse and finally to a grain of barley. Eight barley grains make a digit (angula), which is called matra. Twelve digits makes a span (vitrasi) twice which is cubit (hasta), called by the learned, as well, kisku. Twenty five digits make a prajapatya, twenty six a dhanurmusti and twenty seven a dhanurgraha.

5.6a-11a: For vehicle and seats the cubit (is used), for buildings the dhanurmusti and for the villages and so on the dhanurgraha; the ordinary cubit however may serve for any building; it is called ratni, aratni, bhuja, bahu and kara. Four cubits makes a pole, also called yasti. Eight poles (danda) makes a rope (rajju), villages are to be measured in poles as are pattana, (towns), nigama, kheta, palaces etc.; but house are to be in cubits. The sage should employ the span for vehicle and seat, the digit for small (objects) and the barley grain for very small ones. Such is the system of measurements.

5.11b-12: The matrangula is equal to the middle phalanx of the middle finger of the officiating priest. It is (to be used for measurements relating to) sacrifices, etc. that which has just been mentioned is also called “digit taken from the body” (dehalabdhangula).

5.13a: Knowing all this the architect must measure rigorously.

Study: From the above, with measurement of “Purusa” the linear scale with twenty-four-finger breath is to be selected for a cubit. Also we find the measurement of priest or Yajamana (the chief or the donor) is to be taken. There is an ancient proverb in Tamil “Enn Jhan Udambuku Thaliae Prathanam”, which means “The head is vital part of the body having eight span (vitrasi) of length”. We have already seen twice the span (vitrasi) is the cubit (hasta) which is of twenty-four finger breath.

The Cubit in Tamil Mulam, in Hebrew ammah (“mother of the arm” and “ammah” in Tamil is “Mother”), the forearm, was the nominal distance from one’s elbow to the fingertip; the term “cubit” is from the Latin cubitus, the lower arm. 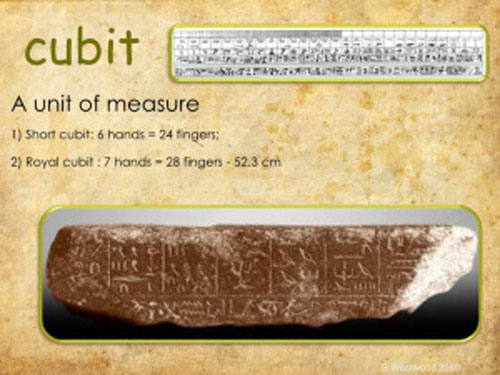 According to Geometry of Ancient India Page.44 – Swami Satya Prakash Sarasvati: “The measurement of hand breath is four-finger breadthˮ.

During the King Solomon period the measurement selected for the temple construction was a standard cubit.

ESSENTIAL READING: Pawns In The Game by William Guy Carr (5)