The Art of Blessing Our Food 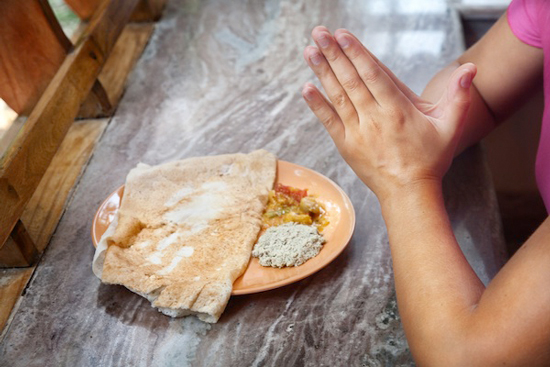 For millennia, we humans have had our most important conversations, forged our strongest alliances, and made our biggest decisions at the same location. The dinner table. In every corner of the globe, family traditions have been passed down through recipes, ceremonial serving items (Grandma Pearl’s set of fine china or Uncle Hazzba’s after-dinner hookah), and stories shared over meals. The sacred before-meal prayer – offering thanks for the bounty and abundance that feeds and nourishes our bodies – in the many forms it takes across cultures, has been a grounding reminder for even the smallest family members about the importance of being grateful for what we have.

Sadly, we see these prayers becoming less common in our busy modern lives. Families gather around the television instead of the hearth, individuals interact with their devices instead of each other, or food is grabbed from a package while on the run. Meanwhile, many are longing for more connection to each other, to the Earth, and to spirit.

The conscious preparation and sharing of food as a sacred ritual is a powerful binding force for families and communities. When we lovingly prepare food together, and serve it with gratitude, we receive more than just physical nourishment. The secret ingredient in every tenderly prepared dish around the world is the same: love.

Here’s a story about a grandfather named Nick who was a keeper of his family’s cooking tradition, and instilled in his grandchildren a deep reverence for food and all of its delicious magic.

Grandpa Nick grew up as a baker’s son in Brooklyn. He learned from his parents how to make a hundred different traditional Italian Sicilian dishes, including a most delicious bread. The children spent entire days helping the grandparents cook in the in-law apartment built for them in a basement. Grandfather’s meticulous way of preparing the ingredients, cooking each dish, and cleaning up while he went along was meditative.

Children used to get tingles up the spine just watching gransparents prepare the homemade manicotti or the white bean and escarole soup. He’d lick his upper lip — an indicator that he was really concentrating on a difficult maneuver, while tucking the semolina dough under a delicately positioned ravioli. Each moment in the kitchen felt so rich, so tranquil, so filled with intention, meaning, and joy. The way life should be.

The children still tell stories about the old days growing up, about Sunday night dinners with all cousins, aunts, and uncles crowded around a huge dinner table crammed into a tiny little Brooklyn dining room, and this was “where it all happened”. This is where stories of the old family were told, where the father got to see his dad’s fluid banter with his uncles, and witness his mom’s playful chat with her sisters. One big family melting pot, where everyone was noticed and loved. And the food was delicious.

Everyone in the family knew their way around the kitchen, but Grandpa Nick’s cooking was the stuff of legend. His food bedazzled the taste buds of many people, but the greatest impact he made on them came before they even lifted the forks to their mouths.

If you were in that family, you knew the drill, and if you were a newcomer you learned it quick. Once the food was laid out and everyone was seated, the grandfather would look around the table and make gentle eye contact with everyone. Then he’d reach for the hand of the person seated to his right and left, prompting them to do the same, until the circle was complete and connected.

He would close his eyes, bow his head, and in a fast, rhythmic cadence, pray to God to bless the food, shed his light and love on everyone at the table, and then thank Him over and over again for all that He had given to them. This wasn’t for show; it was a communication.

When he was complete, he’d open his eyes, lift his head, and with a sweet smile on his face say: “Are you ready eat?” And then they all started to enjoy the food. Grandpa Nick always served everyone else first, before himself. But the 5-foot-8, 140-pound Sicilian could eat like no other!

The children are doing their best to follow grandfather’s example. In their own families, they have a “no devices at the dinner table” rule. They may not make everything they eat from scratch, but they do take the time to ponder the origin of the food and bless the meals for the sustenance they provide their body, mind, and spirit.

Mealtime is a time for people to be fully present with one another, setting aside the hustle and bustle of the day.
If you would like to bring more sacredness into the preparation and sharing of food in your home, below are three blessings that may inspire you:

From the Native American Iroquois Tradition

May the food we are eating make us aware of the
interconnections between Universe and us,
Earth and us, and all other living species and us.
Because each bite contains in itself the life of Sun and Earth.
May we see the meaning and value of life from these
precious morsels of food.

Facebook’s war on free will