The serious health consequences of putting your laptop on your lap 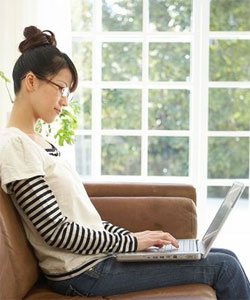 Laptops are overtaking desktops for personal use. One of the main reasons why a laptop seems to be the preferred device these days is its ability to be used virtually anywhere, including your bed, couch or a bench in the park.

However, if you like to use your laptop while you’re sitting on the sofa, enjoying the outdoors or waiting for a plane, you’d be wise never to rest it directly on your lap. In spite of what its name might suggest, research has shown that your lap is, paradoxically, not the ideal place for a laptop.

People who spend vast amounts of time reading, studying or playing games on a laptop resting on their lap could develop “toasted skin syndrome”. A medical report has found that placing devices like laptops next to the skin for extended periods of time can lead to an unusual-looking mottled skin condition or rash caused by long-term heat exposure.

This condition, also known as “erythema ab igne”, develops over time and depends on how much the laptop is used on the lap and how hot it gets. While the syndrome is generally harmless and resolves itself when further exposure is prevented, it can cause permanent skin coloration. According to Swiss researchers, Drs. Andreas Arnold and Peter Itin from University Hospital Basel, the syndrome may also cause skin damage that leads to skin cancer in very rare occasions.

“There is a risk of skin cancer that can occur from erythema ab igne but it’s very uncommon” said Dr. Neil J. Korman, a dermatologist and director of the Clinical Trials Unit at University Hospitals Case Medical Center in Cleveland. “It’s more of a theoretical risk” he added.

Male infertility is perhaps the most serious risk associated with laptops. According to researchers at the State University of New York at Stony Brook, the scrotum is very fragile and adapted to keep sperm at a relative temperature.

However, setting a laptop on your lap may increase the temperature of the scrotum upwards of 35 Fahrenheit degrees above the normal body temperature of 98.6 degrees, which negatively impacts sperm production and may even cause infertility. 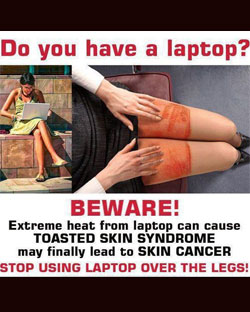 According to dermatologist Anthony J. Mancini, prolonged skin inflammation can potentially increase the chances of squamous cell skin cancer, which tends to be more aggressive than the more common form of skin cancer.

Furthermore, electromagnetic fields produced by laptops can possibly induce currents within the body at unsafe levels. For one study, published in the Archives of Environmental and Occupational Health, researchers from the University of Siena, Italy, evaluated five commonly used brands of laptops.

They found that the electromagnetic field (EMF) values were within the safety guidelines created by the International Commission on Non-Ionizing Radiation Protection. However, they noted that the radiation values became alarmingly high when the laptop was used close to the body, which could potentially induce tumor development. Furthermore, the researchers pointed out that the EMF values were considerably higher than the values recommended by two recent guidelines for magnetic field emissions from computer monitors.

After studying the effects of electromagnetic fields from laptop use, the Italian researchers concluded that laptop companies should change the name of the product to prevent improper use and protect users’ health.

Luckily, most of these issues can be prevented; keeping your laptop off your lap is a good start.