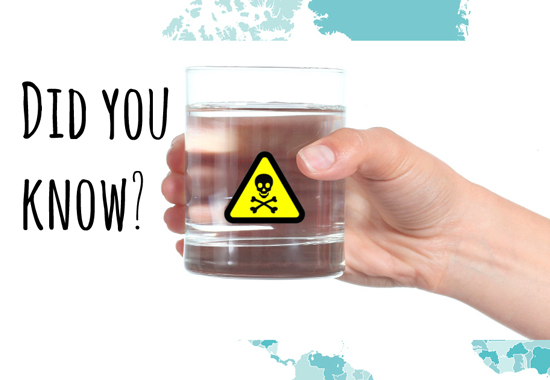 The first ever US government funded study of fluoride and IQ reveals that pregnant women exposed to fluoride lowers the IQ of their offspring.
The study, published in Environmental Health Perspectives and funded by the National Institute of Environmental Health Sciences, confirms that mothers who drink water contaminated with fluoride will see a loss of 6 IQ points in their children.

The study was conducted in Mexico City using a long-running cohort of women-infant pairs that have been studied extensively for effects of environmental neurotoxins such as lead and mercury. It found an average loss of 5 to 6 IQ points among children of mothers with urine fluoride levels of 1.5 mg/L compared to those with 0.5 mg/L. For an entire population, such a loss would be expected to halve the number of geniuses in society and double the number of mentally handicapped. For IQ measured at 4 years of age, there was no apparent fluoride exposure threshold below which the effect leveled out.

The mothers in this study had a range of fluoride exposures similar to that found in fluoridating countries like the United States.
According to the lead investigator and professor of environmental health, epidemiology and global health at the University of Toronto, Dr. Howard Hu, the study “also suggests that the pre-natal nervous system may be more sensitive to fluoride compared to that of school-aged children”.
Experts in the field of environmental toxicology have said the results are a huge red flag: “This is a very well-conducted study, and it raises serious concerns about fluoride supplementation in water. These new insights raise concerns that the prenatal period may be highly vulnerable and may require additional reconsideration”, says Dr. Leonardo Trasande, a pediatrician who studies potential links between environmental exposures and health problems at New York University Langone Health. (Newsweek, 9/19/17)

Chris Neurath, research director for Fluoride Action Network, agrees: “The loss of IQ is very large, as large as in previous studies from China where fluoride exposure levels were typically higher. The study was meticulously done and controlled for a wide range of potential spurious factors such as lead, mercury, socio-economic status, smoking, alcohol use, and health problems during pregnancy. The study was able to largely rule out confounding by these other factors.”

Proponents of water fluoridation such as the American Dental Association (ADA) have responded to this study with the erroneous claim that the mothers in Mexico had exposures to fluoride higher than found in the USA and other fluoridating countries, and is therefore not applicable. They even make the nonsensical claim that if fluoride in the Mexican mothers’ urine came from a mix of sources that differs from women in the USA that the study would not be applicable. Once the fluoride is in the women’s body, it does not make any difference with respect to toxicity where the fluoride originally came from.

According to Bill Osmunson, director of the Fluoride Action Network, “The dental lobby is confirming what we have suspected for some time, they are more interested in protecting the outdated program of water fluoridation, than in protecting the brains of future generations. Supporters of fluoridation have not refuted the key finding of this study that fluoride harms the developing brain.”

Fluoride Action Network has documented over 300 animal and human studies indicating fluoride’s neurotoxicity over the last 20 years. Three of the earliest studies from China showed brain damage in fetuses from areas with high natural fluoride levels in the water (He et al., 1989; Du et al., 1992 and Yu et al., 1996). These early studies prompted the dozens of Chinese IQ studies conducted from 1991 to the present. Many of these studies were reviewed by a Harvard team in 2012 (Choi et al., 2012) and found to give a strikingly consistent pattern of lower IQ with higher fluoride exposure.

Fluoride Action Network’s advisory director, Dr. Paul Connett, PhD, chemistry and toxicology, in a video response states “this finding is a game-changer in the fluoridation debate. How could any rational person put the saving of a very modest amount of tooth decay over the mental development of our children?”
“Children are the primary victims of our failed fluoridation policy, and mothers are our last line of defense”, advises Bill Osmunson. “To protect your baby’s brain, we recommend mothers avoid drinking fluoridated water, swallowing fluoride supplements or toothpaste, and avoid fluoride dental treatments during and before pregnancy.”

Outside the circle: the ancient Stonehenge landscape – a wider perspective

An Empire Built on Fear at Home and Abroad. War Fever is Everywhere