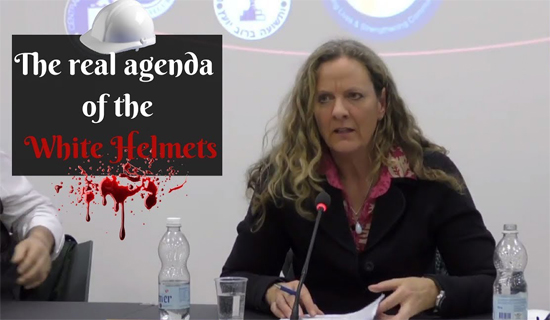 Perception management has long been a facet of the dominant minority (also known as “Deep State”) that controls the military, political, financial, and industrial sectors of life in the Western world. Perception management is not only undertaken by political discourse in the political realm but even more so by the media that is supposed to be tasked with presenting the public with factual information, but today functions solely as a propaganda arm of the Deep State apparatus. Indeed, the mainstream corporate media frames, shapes, and creates issues for the public to debate and cleverly guides them to the desired conclusions.

In addition to mass “news” media, however, television shows, movies, dramas, sitcoms, and documentaries all play a part in shaping the perceptions of the public in regards to current events as well as to the world around them, both locally and far away.
To control and manage the perception of hundreds of millions of people is quite a task and requires a massive network of corporations, industry, financiers, intelligence, and political coordination, however, and this leads many to believe it is impossible to achieve. That lack of understanding of just how much American media/entertainment is manipulated only serves to make the target population more susceptible to the propaganda.

One small peek into the world of mass perception management can be witnessed when looking into the recent documentary volley fired by the pro-war, anti-Syria Hollywood, National Geographic, BBC machine regarding the White Helmets. The goal of these documentaries is to paint the White Helmets as selfless, unarmed, non-political heroes rescuing innocent people from the rubble left behind by Assad and Putin’s bombs, the latter being aimed at civilians alone. The reality, of course, is something quite different.

“The function of these movies is to ensure that the Al Qaeda affiliated White Helmets come up smelling of roses from the rubble of areas of Syria occupied by terrorist and extremist groups lorded over by Nusra Front (Al Qaeda in Syria)” writes journalist and expert on the White Helmets, Vanessa Beeley.

Beeley’s work is extremely important in understanding what is happening on the ground in Syria and we recommend accessing her articles, interviews, and lectures which can be found across the internet.
One such article, White Helmets: Channel 4, BBC, The Guardian – Architects of ‘Humanitarian’ War, is profound in its exposé not only of the White Helmets fraud but of the documentary/news machine that promotes them. In that article, Beeley draws attention to the smattering of “documentaries” flooding the viewing market at around the same time promoting the White Helmets, pushing the NATO/US coalition narrative, and demonizing the Syrian government, Russia, and Bashar al-Assad. She writes:

“As if on cue, a vast number of documentaries have flooded the media market. The huge majority have conveyed a very one-sided perspective of the conflict in Syria and have, almost invariably, supported the US Coalition regime change narrative, which has prolonged the destabilization project in the region for the last seven years. Are these documentaries any more accurate than the corporate media they might replace?

For example, on April 5, 2017, National Geographic released a preview of its film, Hell on Earth: The Fall Of Syria And The Rise of ISIS, by filmmaker Sebastian Junger and producing partner Nick Quested. This film was prematurely released to coincide with the alleged and controversial Khan Sheikhoun chemical weapon attacks in Syria, on April 4th. However, as Paul Larudee revealed, the film preview was a fraudulent misrepresentation of the war in Syria: ‘The [opening] scene shows a missile destroying a residential building with a thunderous explosion. Imposed over the footage are the words, ALEPPO, SYRIA…[…] The original source footage comes from 2014, and is from the Israeli operation that took more than 2,200 Palestinian lives that summer’.

Shifting public perception is, indeed, one of the roles of modern documentary makers, who, in many instances, take their funding from the same Time Warner, AOL and Walt Disney media investment pools in order to produce heart-stopping, emotion-wringing perception-changers for a western public whose opinions on state foreign policy is undoubtedly, hugely influenced by these ostensibly ‘factual’ documentaries.

During the 7 year-long US Coalition-engineered, financed and armed Syria project, very few organizations have been so feted in political, media and Hollywood circles, as the NATO member-state-financed White Helmets.
Last year’s Oscar award for the Netflix documentary on the White Helmets is followed by the 2018 nomination for Last Men in Aleppo, the latest glossy, emotionally-charged promotional movie, featuring members of the alleged ‘first response’ group doing what they do best – clambering over rubble, terrorist cheerleading and gazing skywards at imaginary helicopters.”

The admitted source of a number of these films should make viewers question their motives at the very least. One such organization, the Syria Campaign, is funded by an oil magnate that seeks to gain by the fall of the Syrian government, and the organization itself functions as media wing for the White Helmets. Many of the films that it boasts of creating are thus nothing more than marketing propaganda for al-Qaeda/Nusra’s own propaganda wing known as the White Helmets.
Beeley mentions this in her mentioned article when she writes: 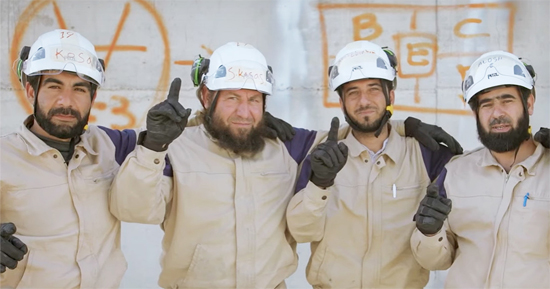 “Syria Campaign is effectively the White Helmet PR agency, seed-funded by UK resident and Syrian oil magnate, Ayman Asfari, who, incidentally, has also financed Theresa May’s Conservative government and is under investigation by the Serious Fraud Office in the UK, having been already sanctioned in Italy for insider trading. He can, most certainly, be described as an interested party in the outcome of the Syrian conflict with openly declared political ambitions once the UK Foreign and Commonwealth Office-endorsed regime change is secured, plans that have been thwarted by a secular Syrian resistance with the support of their regional and geopolitical allies.

According to one of their many job offers, Syria Campaign have focused their advocacy efforts on the White Helmet organization:
– Created award-winning films that have been viewed by tens of millions of people and shown in the White House;
– Generated thousands of media stories about Syria around the world;
– Unlocked tens of millions of dollars in aid through targeted advocacy;
– Placed key aspects of the conflict at the top of the political agenda;
– Raised millions of dollars in direct support for life-saving Syrian heroes;
– Built a community of more than 500,000 people across the world taking action in solidarity with Syria’s heroes.”

In this push for mass perception management, Beeley, in her article, pinpointed what she believes are the three main defenders and peddlers of the White Helmets mythology. The Guardian, BBC, and Channel 4 are the outlets she focuses on, acknowledging many more like CNN and the Huffington Post. However, the British outlets mentioned above are those that she deems the most heavy purveyors of the White Helmets myth, a hypothesis which most likely bears out to be true. We recommend reading Beeley’s article to get a grasp of some of the individual players in each of these outlets as well as the scale to which they have gone in order to promote and defend the White Helmets.

But while these outlets promote and defend the White Helmets one question remains as to who is producing and funding them? Beeley’s article provides some answers. The first organization she mentions is Doc Society, formerly known as Britdoc, which is based in both New York and the UK. According to the organization, it is a “non profit, founded in 2005, committed to enabling great documentary films and connecting them to audiences globally”.
Three interesting aspects to Doc Society are found on their website which states that it grants 500,000 pounds per year, along with the Bertha Foundation and “others”. It also mentions its Good Pitch – “Where the world’s best social change filmmakers meet new allies and partners: $29m raised at 34 Good Pitch events” as well as its Impact Award that is provided to films “making the greatest social impact”.

Beeley writes of Doc Society and the Threshold Foundation:
“Joanna Natasegara and Orlando Einseidel of Violet Films and Grain Media, respectively have collaborated on a number of projects, most notably in 2014 on Virunga (based in the Congo) and then in 2016 when they directed and produced the Netflix channel White Helmets ‘documentary’. In reality, they sat on the Turkish side of the border with Syria and had the footage supplied to them by the White Helmets with no verification process to ascertain the authenticity or context of the material they converted into the Oscar winning promotional feature film.

Virunga was made two years before the White Helmets and was also heavily promoted by both Doc Society and Good Pitch.
The post production team that worked on the Netflix channel White Helmets movie was a company called Molinare.

‘I have the privilege of leading our highly talented and dedicated creative teams, and am constantly amazed by what the team can achieve in post to make a production look and sound its absolute best’. – Julie Parmenter, Managing Director.

Molinare is also featured on the Good Pitch page of Doc Society as is Violet Films.

‘We were extremely proud to be included in the prestigious Sundance Institute / Britdoc run Good Pitch event held at the Royal Institution. We were there to pitch to over 400 people about a very exciting project we’re working on.’ – Grain Media, June 2013.

It is worth noting that both Grain Media and Violet Films work closely with the BBC, The Guardian, Al Jazeera and Channel 4 on a number of projects.

[…] Doc Society submits films to the Threshold Foundation that they consider worthy of a grant. One such film was the Netflix channel White Helmets documentary.
In October 2016, I received a confidential email from someone who was concerned about an NGO’s funding going to the White Helmet film. It has become clear to me that at minimum the White Helmets are for regime change as they themselves call for a no fly zone which is an act of war, at worst a totally fraudulent organization and the centerpiece of a public relations campaign of deception. Shortly after I received this email, the following statement appeared on the Threshold Foundation website…”

Beeley’s article continues with a picture and file of the statement, the relevant passage being the part where Threshold states: “We have since learned that the subject of the film (the White Helmets organization) and others involved in this film are advocating for strategies that could entail international military force and escalated violence. Given that military force and violent strategies do not align with Threshold values, we state that while we support the work of the filmmakers, we do not support militaristic responses.”

Unable to develop a new antibiotic drug for decades, new research ‘discovers’ potential in a compound from honeybees…