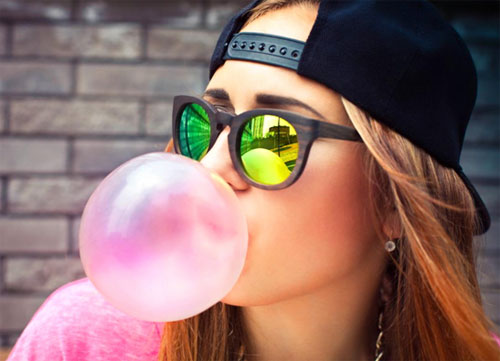 According to a new study, titanium dioxide, an additive that is found in most sweets and chewing gums, can damage your gut, say scientists. The mineral is what gives many candies and desserts their smooth texture and appealing color. Previous beliefs held that the mineral, which is present in small amounts, had no adverse health effects. Yet a recent study published in NanoImpact showed that nano-titanium oxide ingredients such as titanium dioxide can seriously impact gut health.

Biomedical Engineering Assistant Professor Gretchen Mahler, one of the authors of the study, states: “Titanium oxide is a common food additive and people have been eating a lot of it for a long time – don’t worry, it won’t kill you! – but we were interested in some of the subtle effects, and we think people should know about them.”

Researchers tested the rate at which exposure to this mineral affected the gut. Acute exposure, which equaled four hours of continuous intake, showed to have little effect. However, chronic exposure – equal to three meals worth over a five-day period – caused significant damage. Heavy exposure to titanium oxide is connected to slower metabolism, inflamed intestines, blocked nutrient absorption, and a weakened immune system.

The mineral acts a coating to the small intestines’ microvilli, which are small projections that surround the gut. The tiny hair-like structures absorb nutrients needed for survival and promote good health. Titanium dioxide prevents the microvilli from performing efficiently. This causes the cells in the small intestines to gradually break down and die. Consequently, the body is no longer able to absorb essential nutrients like zinc, iron, and some fatty acids. People are thus more prone to infections.

The Sweet Life is Not So Sweet

Still, the US Food and Drug Administration says titanium dioxide is safe. The mineral is used in hundreds of different products (including toothpaste). This makes unintentional ingestion nearly unavoidable. What is stressed is that consumers be more aware of what they eat and for them to practice a healthier lifestyle. The study does include a caveat, citing that people need to have long-term exposure to high amounts of the mineral to have detectable effects.

In 2015, under the intense scrutiny of several health regulatory boards, Dunkin Donuts discontinued nano-titanium dioxide in its powdered sugar used for their donuts. Following this controversy, several other food groups took a closer look at their manufacturing process. Their concern, they emphasized, was their customer’s health.

Despite this, not much attention was placed on another big application of titanium dioxide: chewing gum. This seemingly innocuous sweet – one that is often touted for its breath-freshening properties – may be more dangerous than it lets on; chewing gum often contains high levels of titanium dioxide.

New studies point to the brain-gut connection. Medical conditions, especially those that are psychological in nature, are noted to be directly connected to a person’s diet. The old adage of “you are what you eat” is no longer an old wives’ tale but medically-validated assumptions.

Endocrinologists often call the gut the “second brain”. The area from your throat to your anus controls digestion and releases necessary enzymes needed for optimal health. A single disruption in this process can significantly impact how you feel, think, and go about your day.

It is crucial that people know what they put in their mouth. It is naive to believe that youth is a safeguard against disease. Current research shows that because children are more exposed to a diet rich in sugar and additives, they are more prone to being overweight and sickly. For that reason, it is important to know what the ingredients listed on the packaging really are.

“To avoid foods rich in titanium oxide nanoparticles you should avoid processed foods, and especially candy. That is where you see a lot of nanoparticles,” Mahler adds.