The question is simple: Does our current vaccination program help us to avoid chronic illness or make matter worse? While the Centers for Disease Control and Prvention (CDC) and other health agencies don’t seem in a hurry to do analyses of the health of children who receive vaccines versus those who don’t, a group of scientists from the Jackson State University School of Public Health has taken the initiative. (The results are alarming.) 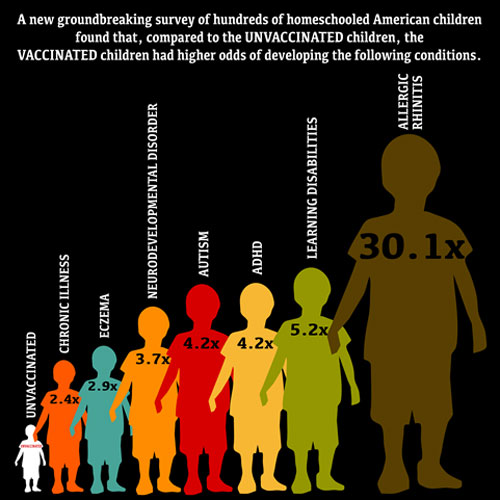 Their research sought to accomplish two things: To determine if there is an association between vaccination and neurodevelopmental disorders such as autism and ADHD in children, as well as look for a broad range of chronic illness types that may develop in vaccinated versus unvaccinated children.

While the abstract starts by acknowledging the benefits of vaccines in the past 60 years, the researchers then quickly pointed out that with the current pediatric vaccine schedule, kids are receiving 48 vaccines for 14 different diseases by age 6. The researchers also acknowledge that although vaccines are tested initially and many are found to have health risks, the risks are all too often dismissed as minimal.

More importantly, the long-term effects of vaccines administered within such a short amount of time (the first 6 years of life) have not been adequately assessed. Very few randomized trials have been conducted in terms of health effects and mortality rates over time.

This is in part due to ethical concerns regarding assigning control groups of children who do not receive vaccines in these studies. (The fact that drug makers feel that just giving vaccines to all kids without more thorough testing is a better solution is very disturbing.)

The Jackson State University School of Public Health looked at 666 kids of which 39 percent were unvaccinated. The study found that while vaccinated children had lower incidences of whooping cough and chicken pox, other chronic illness rates were not reduced, including Hepatitis A or B, mumps, measles, bacterial meningitis, viral meningitis, the flu, high fever or rotavirus.

Vaccinated kids were also “significantly more likely” to have autism, ADHD, learning disabilities, eczema and allergic rhinitis. The study results were published in the Journal of Translational Science.

The current controversy over vaccines is related to their connection with neurodevelopmental disorders such as autism and ADHD in children. There seems to be a “silent pandemic” at this time, with around 15 percent of all children suffering from some sort of sensory deficit, learning disability or developmental delay.

Risk of chronic illness and ADHD in children from vaccinations not worth the risk, say researchers

In conclusion, vaccination benefits were not found to outweigh their risks. While vaccination did help lower incidents of whooping cough and chicken pox, risk for developing chronic illness or a serious neurodevelopmental disorder such as autism or ADHD increased.